Should Oprah run? Here’s what she needs to do now 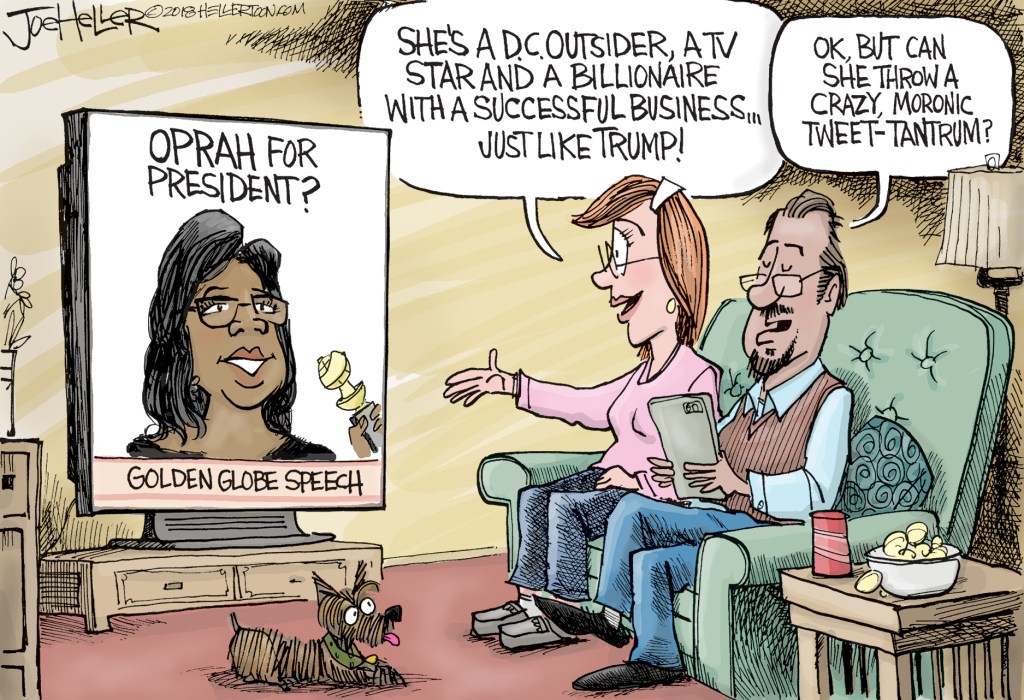 There are plenty of reasons for Oprah Winfrey not to run. She has never held office, she may not be temperamentally fit for the rough-and-tumble of politics, and the country may be fed up with political neophytes running for office. If the idea is to fight celebrity with celebrity, Democrats should consider that President Donald Trump might not be around in 2020 (by impeachment, resignation or retirement). She might have to face a sane, qualified Republican.

She is infinitely more qualified than Trump was (or is), more decent, more intelligent and informed, and more trustworthy. The question should not be whether we’d vote for her if she were Trump’s opponent but whether that would be best for the country.

In a sense, Trump has ruined presidential politics for the uninitiated celebrity. We’re a lot more leery of non-politician presidential candidates than we were before Trump ran, extending even to any number of businesspeople who would be dramatically more fit for the presidency than he.

The myth that a businessman has some secret sauce to make the government run better has been punctured. Success in one arena does not necessarily transfer to another.

However — and I am still not sold on the idea of Winfrey as a political candidate — if she were serious, she’d need to do a number of things, starting very soon.

First, she would need to do what Trump did not — sell her businesses, end her licensing deals and commit herself entirely to public service. Her willingness to do so would be a powerful contrast to Trump, who is hobbled by financial conflicts. If Winfrey cannot do this, the entire presidential buzz should end.

Walter Shaub, former head of the Office of Government Ethics, tweeted: “May I suggest respectfully to any billionaires considering a 2020 run — whether as an R, a D or otherwise — that you do some soul searching to make sure you are willing to divest your financial interests and make that commitment in advance? Otherwise, you’ll be part of the problem.”

She also has a philanthropic empire to consider. Unlike Trump, Winfrey has done massive amounts of philanthropy (including overseas endeavors), and to avoid following in the footsteps of Hillary Clinton, Winfrey would need to shut down all endeavors in which she solicits donations from others, in order to avoid potential conflicts of interest.

Let’s say she got past all that. She’d need to demonstrate, unlike Trump, that she is serious about policy and fully capable of understanding the complexities of foreign and domestic policy. She’d need to travel extensively, hold sit-down briefing sessions with top foreign policy and national security figures (as George W. Bush did), identify with some precision her policy goals and figure out how to present all that to the public in advance of a run. (A series of speeches? A book?)

It’s one thing to have a generic albeit admirable position on sexual assault or workplace equality, but it’s quite another to decide whether you favor the North American Free Trade Agreement or what kind of tax reform you’d pursue or how you’d deal with North Korea. One way station before a presidential run would be a political entity that seeks to help other candidates in 2018 while setting forth a prototype of an agenda.

You might say that this all sounds unfair, as Trump didn’t do these things. You’re right — but precisely because Trump didn’t do any of this, the next non-politician to run, be it Winfrey or someone else, will need to demonstrate some actual qualifications, capabilities and ethical standards.

If Winfrey were serious about a real run, she’d need to acknowledge that this is a long-term endeavor. That would mean to begin now to disentangle herself from financial conflicts and put together a game plan for launching a political career along the lines I’ve described above.

And if she is not up for all that, she might — as she did in 2008 — play the role of king- or queen-maker in helping to launch a more traditional candidate. A public role for her to rally support against Trump and Trumpism on behalf of another candidate would be fascinating and entertaining, to say the least.

If anyone can explain to the masses the threat Trump poses to our democracy, it’s Winfrey. As a bonus, her appearance on the national political scene could well send Trump (further) around the bend.