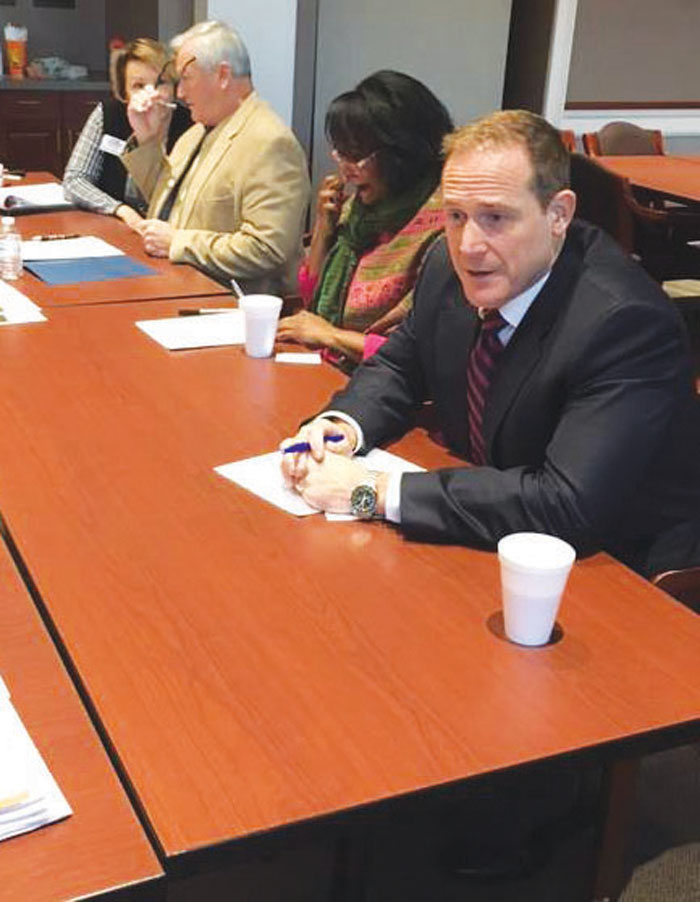 Congressman Ted Budd joins other elected officials at the Mayors' Roundtable meeting of the Rowan County Chamber of Commerce on Friday, Jan. 5.

The meeting was held in the Gateway Building with participants including Rowan County Commissioners Chairman Greg Edds, County Commissioner Judy Klusman, U.S. Rep. Ted Budd, N.C. Rep. Harry Warren, and other elected officials and business leaders from across the county.

The mayors’ roundtable used to be held quarterly as a way for community leaders to share common successes, issues and struggles, said Edds. Meetings dwindled as the commissioners began inviting city councils and school board members to monthly breakfasts.

Both Edds and Elaine Spalding, president of the Chamber of Commerce, said the mayors’ roundtable will be reinstated for 2018.

Kannapolis Mayor Darrell Hinnant said Friday’s meeting gave community leaders and legislators a chance to get to know one another.

“I think it was a good time for all of us to get together,” he said. “The meeting was well run in Rowan County, and I’m glad that I was there.”

“… (W)e discussed many ways that we can work together to start fixing the problems that face the families in our communities,” said Budd. “I really appreciated the time to discuss steps we can take to update our infrastructure, improve education in our community, and what we are doing to fight the opioid epidemic.”

Friday’s talks about infrastructure centered around changes to Interstate 85, including its widening and the construction of a new water main under certain sections. The water main comes as a resolution for Dukeville residents affected by coal ash, said Klusman.

Elected officials discussed goals to ready the workforce for coming job growth. In Kannapolis, Hinnant said, several million dollars of private investment from businesses is in the works.

Rockwell is already feeling the spillover, said Mayor Beau Taylor, with the construction of more than 100 homes and growing companies like FillTech.

FillTech, a local manufacturer of lip balm, has grown from eight employees to 100 in just eight years, Taylor said.

Hinnant said the potential for more investment and job growth hinges on Rowan’s ability to prepare workers to succeed.

For many in attendance of the roundtable, the biggest concern was the opioid epidemic.

“I don’t think (opioid use) … is the only issue. I think it’s maybe a subset of a bigger issue, and that is mental health,” said Hinnant. ” … Becoming addicted to pills is a part of a mental issue that we have not only in our state and around the country.”

Hinnant said changes will be necessary at the state and federal levels for long-term solutions. He said he enjoyed the opportunity to speak with Budd and Warren about the issue.

Klusman said she enjoyed the chance to hear what Rowan County cities and towns are doing.

“If I don’t know what Spencer or East Spencer’s doing, as a commissioner, how do we leverage ideas and resources?” she said. “That’s really the key as dollars seem to be shrinking from federal and state government. We’ve got to get smarter about how we’re spending our money and how we work together.”