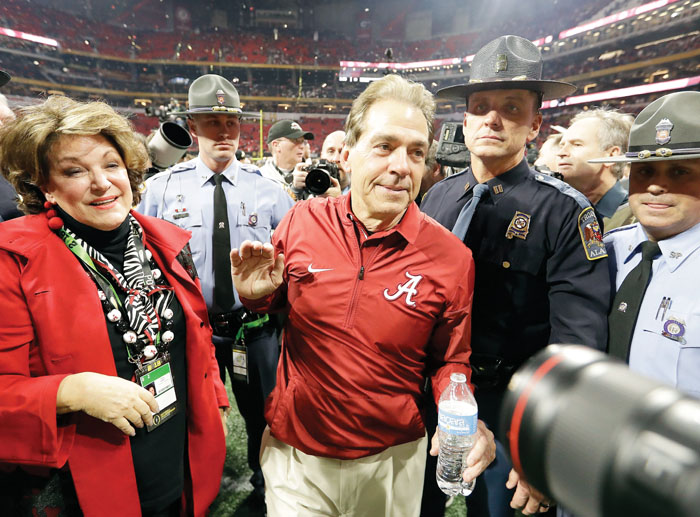 ATLANTA (AP) — Nick Saban wins one title and moves on to figuring out how to get the next.

It’s part of his famed Process.

But Saban’s sixth national title , and fifth in nine years, was different and not just because it put him in a tie with Alabama icon Bear Bryant for the most by any major college football coach. This time one quarterback, Jalen Hurts, led the Crimson Tide into the championship game and another, freshman Tua Tagovoila, directed a second-half comeback in Monday night’s 26-23 overtime win over Georgia .

But Saban has months to figure out which quaterback gives Alabama (13-1) the best chance for a repeat. He allows himself far less time to celebrate actually winning titles, even ones as dramatic as this one. That doesn’t mean he won’t remember it fondly.

“This will be a game that I’ll never forget” Saban said Tuesday morning.

Trailing 13-0 at halftime, Saban turned to Tagovailoa. The five-star lefty from Hawaii delivered in a big way , threading a fourth-down pass to Calvin Ridley for a tying touchdown late and then leading a drive for a potential winning field goal. Andy Pappanastos missed a 36-yarder to send the game into overtime.

After the Bulldogs (13-2) settled for a field goal, Tagovailoa was sacked. He responded with a 41-yard touchdown pass to fellow freshman DeVonta Smith to touch off the latest confetti-dripping celebration for Alabama a year after absorbing a last-second loss to Clemson in the championship game.

It set the stage for a quarterback competition between Tagovailoa and Hurts, who is 26-2 as a starter and has helped Alabama make two title game appearances.

Tagovailoa was named offensive player of the game, making plays running and passing. What he didn’t do: sleep much before attending a morning-after news conference.

“I couldn’t sleep because, if I slept, I would have never woken up to come to this thing,” he said. “Aside from that, it was a good team win. I still can’t believe that this is what happened. It just feels like another game.”

As usual, Saban sounded ready to get back to the business of pursuing another. The coach said he spoke to seven players who are considering leaving early to enter the NFL draft. The group of potential early entries includes All-America safety Minkah Fitzpatrick, tailback Damien Harris, wide receiver Calvin Ridley and defensive lineman Da’Ron Payne.

Saban believes several of them probably should leave and several should return and try to boost their draft stock.

Then Saban was on to planning things like Thursday’s team meeting. But he understands that championships create “a lifelong legacy that everybody lives with.” After all, he said there’s still a sign in Monongah, W. Va., celebrating the 1968 state championship team he played on.

He said someone even recently sent him a license plate saying “1968 state champs.”

“Everybody realizes the sacrifices and the adversity that you had to overcome to do it and the hard work you put in to do it,” Saban said. “And I think it’s something that you never forget. It becomes a part of the legacy of that team.

“But I also think that, if you’re a competitor and you’re a player, whether you’re a coach or a player or any part of the organization, in 24 hours you probably need to move on because there’s another challenge and basically you created a target for yourself in the future in terms of people who want to beat you.”

This team won despite losing four first-round draft picks and seven defensive players who were picked within the first four rounds. Alabama will lose quite a few key players again.

If Fitzpatrick and safety Ronnie Harrison turn pro, that means the entire starting secondary is gone, along with All-America linebacker Rashaan Evans and center Bradley Bozeman besides the underclassmen.

Alabama will certainly still be among the favorites again going into next season, regardless of how the quarterback situation shakes out.

As for his own legacy, Saban refused to rank himself even with Bryant. He helped his case , anyway, by gambling with a halftime quarterback switch with a national title on the line.

“I think Coach Bryant is probably the best coach of all time because of the longevity of his tenure as a coach and the way he changed,” Saban said. “I mean, he won championships running the wishbone. He won them with Joe Namath dropping back throwing when people never, ever did it. I just think that, for his time, he impacted the game and had more success than anybody ever could.”