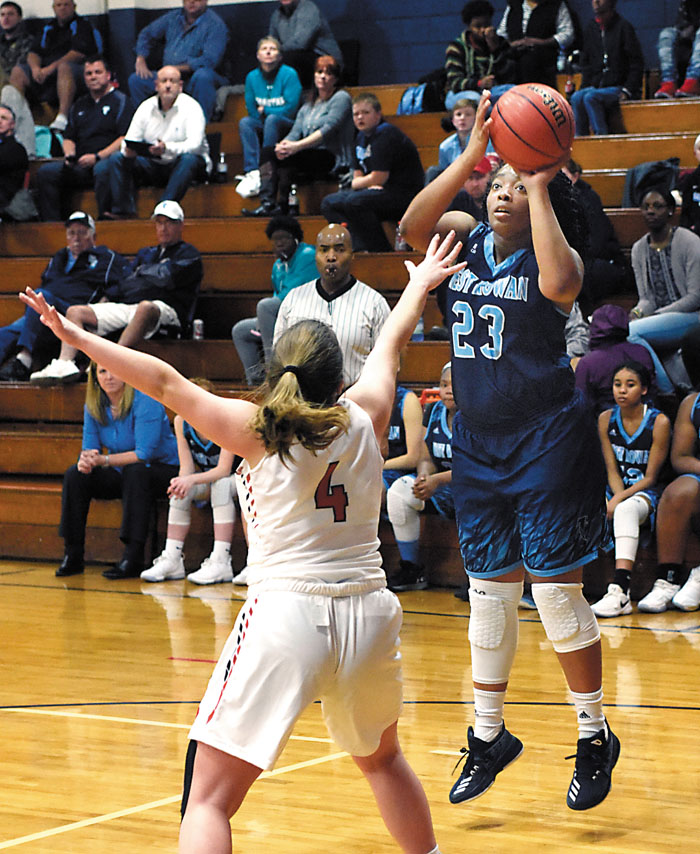 The 5-foot-10 sophomore scored a career-high 30 points and reeled in 10 rebounds as the Falcons drummed host East Rowan, 80-45, for their first NPC win.

“Every win is a good win,” winning coach Ashley Poole said, after West (11-4, 1-1) squared its conference record. “But it’s always good to get that first league victory under our belts, especially after we had such a tough game Friday night.”

“We were focused on team-work, trying to get everybody involved,” Poole said. “Finding their good spots.”

It worked. West nearly matched its season-high of 81 points scored against North Stanly in the Christmas tournament. Egypt Alexander added 23 points and six rebounds while teammates Shyann Vaughters and Mary Sobataka each had five assists.

“We played well in the first half, but really didn’t match up with them,” said East coach Kevin Holland. “Our tallest player is 5-6. They’ve got two 5-10 girls — one leading the county in scoring (Wilson) and the other a 1,000-point scorer (Alexander). Wilson was in the whole game. We didn’t have the personnel to deny her the ball.”

The game turned when West scored five points in the last eight seconds of the first half, turning a 31-25 lead into an 11-point bulge. When Wilson, Sobataka and Alexander hit layups to open the third quarter, East found itself down 42-25. West’s biggest lead was the final margin, accomplished when Wilson hit a put-back with 1:25 remaining and then took a pass from Gabby Blabon and converted a layup with a minute to play.

“I liked that we played hard all the way through,” Poole said. “Because we didn’t on Friday night. Maybe this is just what we needed.”