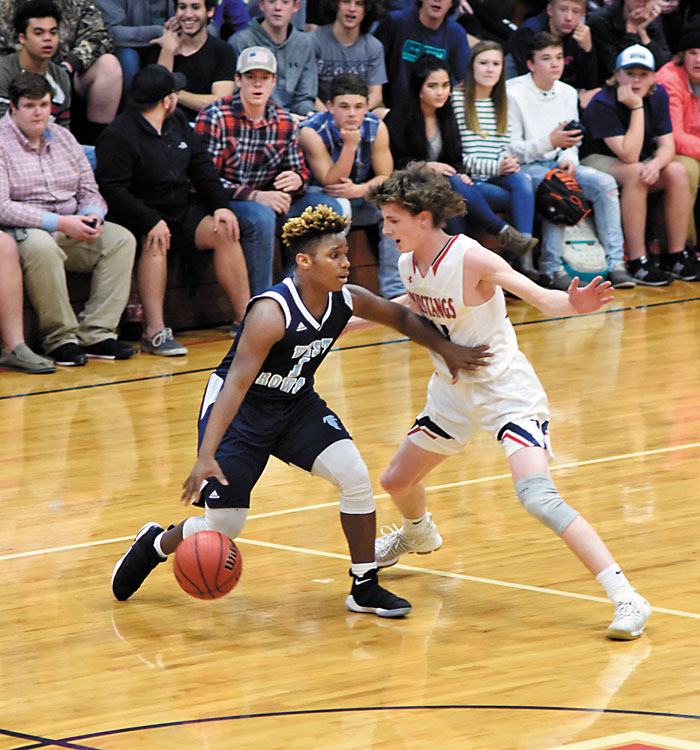 GRANITE QUARRY — West Rowan’s fourth consecutive victory may have looked, felt and sounded like the poem that doesn’t rhyme, but it kept the Falcons’ hearts beating.

They seemingly snuck out the back door Tuesday night when they converted nine of 10 free throws in the last two minutes and stammered past host East Rowan, 55-47.

“Never has been easy playing these guys,” coach Mike Gurley said, after West (8-7 overall) improved to 2-0 in the NPC. “When you’re up six or eight (points) in the fourth quarter and trying to control tempo, you can’t let them dribble right down the court and score in six or seven seconds. You would hope it would take them 15, 16, 17 seconds. We let them do that like two or three times in a row. That kind of hurt us.”

“A win is a win,” Mauldin said. “You take it how you get it. We didn’t expect a blowout tonight. We knew we’d have to come and play for it.”

Nothing was certain until the waning moments. East (6-9, 0-2 NPC) held West scoreless for more than five-and-a-half minutes in the final quarter and drew within 39-35 when junior forward Elton Hooper scored on a crossover layup down the lane, midway through the period — and then when he converted the first of two free throws with 3:12 remaining.

“It was closely contested, but we could have fought harder for the win,” Hooper said, after scoring a team-best 14 points. “It was one of our better games, but at the end of the day, they got us.”

They did — but not until East sophomore Brandon Jefferson was called for a technical foul just seconds after being whistled for an offensive charge with 2:07 to play. Martavio Rankin (15 points), who scored the first of West’s three fourth-quarter baskets on a floater down the lane, hit one of two free throws to push the Falcons ahead 42-35.

“We dug ourselves a hole with turnovers and bone-headed mistakes,” said third-year Mustangs’ coach Kurt Misenheimer. “We got a technical at the wrong time of the game. You shouldn’t get a technical at all, but that took the wind out of us.”

It was still a six-point West advantage entering the final minute. But fastbreak layups by Jay Joseph and Mauldin — each triggered by long, downcourt outlet passes — put the Falcons ahead, 53-43, with 20 seconds left.

“It wasn’t easy,” Joseph said, after contributing 13 points. “East Rowan turned it up in the fourth quarter and we had to adjust. We had to get back on defense, put our foot in the ground and make stops.”

The final period was characterized by missed opportunities from both teams. West never found its stroke and East missed five of nine free throws.

“At the same time, we made the executed plays,” Gurley said. “It just didn’t always look good. But, it’s East Rowan-West Rowan, and it’s a good win. We’re pleased.”

Gurley was particularly pleased when reminded the Falcons are 2-0 in conference play. “There’s a lot of basketball to be played, but it’s a start,” he said.

Misenheimer was content with East’s defensive performance — this marked the seventh straight game the Mustangs kept an opponent below 60 points — but its offense continues to struggle.

“We couldn’t throw the ball in the ocean,” Misenheimer said. “We’re not shooting a high percentage, and we took a lot of outside shots. We should have attacked more, gotten (Hooper) more touches. He’s a dangerous player with the ball. I mean, it’s easy to sit back and take the three. But if you’re not making them? Don’t shoot them.”

NOTES: East made six 3-pointers, including four by junior Mark Spry. … The Mustangs held an early 5-2 lead following an industrial-strength jam by the 6-foot-7 Hooper. … West sank 16 of 24 free throw attempts. … Both teams return to action on Friday. East lugs a four-game losing streak into its home game with Carson, while West hosts South Iredell.