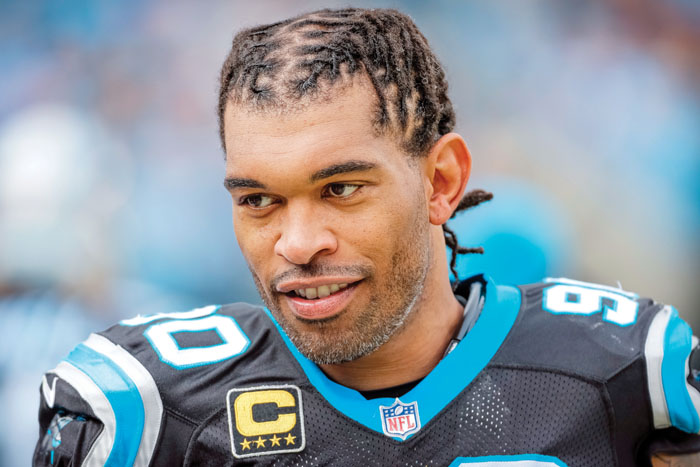 Carolina Panthers' Julius Peppers (90) on the sidelines against the Tampa Bay Buccaneers during the first half of an NFL football game in Charlotte, N.C., Sunday, Dec. 24, 2017. The Panthers won 22-19. (AP Photo/Bob Leverone)

CHARLOTTE (AP) — The Carolina Panthers enter an offseason of uncertainty unlike any other in the 23-year history of the franchise following their 31-26 wild-card loss to the New Orleans Saints on Sunday.

First and foremost, the team is officially for sale.

The end of the season means Panthers owner Jerry Richardson will begin actively accepting offers to purchase the franchise he brought to the Carolinas as an expansion team in 1993. The Panthers began play in 1995 but never won a Super Bowl under Richardson, despite his promise in 1993 to win a championship “within 10 years.”

The 81-year-old Richardson announced last month he was selling the team after reports of alleged sexual and racial misconduct in the workplace led to an NFL investigation. That investigation is ongoing.

“It will be an interesting offseason to see how things work out,” Panthers tight end Greg Olsen said as he cleaned out his locker on Monday.

“None of us have been through something like this, of course. It doesn’t happen often in the NFL.”

While the league will surely push to keep a franchise in Charlotte, where it has successfully sold out all but two games during its history, there is no telling if the new owners would consider moving the team. Rivera hopes the Panthers stay in Charlotte.

“I think this is a great area and I think we have shown that we (are) supported by the community,” Rivera said.

Panthers interim general manager Marty Hurney got emotional Monday as he shook hands with players as they left the locker room.

He tried to hold back tears when asked about the end of the Richardson era.

“Sure, it’s more emotional,” said Hurney, who previously worked for the Panthers from 1998-2012. “Anytime the finality of losing a playoff game is hard to take. And then when you have these other things it’s hard.”

The impending sale of the team is just one of many uncertainties surrounding the Panthers this offseason. Here are some others:

While Rivera received a two-year contract extension through 2020 last week, the Panthers front office remains up in the air. Hurney was re-hired by Richardson to serve on an interim basis last summer but his contract expires June 30.

Hurney said Monday he would like to stay on, saying “I love what I’m doing right now.” Rivera and several players also threw their support behind Hurney coming on in a full-time role again.

Rivera seems pretty certain he will lose a defensive coordinator for the second straight offseason with Steve Wilks scheduled to meet with the Giants, Lions and Colts for vacant head coaching positions.

Wilks is viewed as a favorite in New York, where former Panthers general manager Dave Gettleman is now calling the shots. Rivera said if Wilks leaves he’s leaning toward promoting an assistant from inside the organization.

“I feel really good about the guys that we have in place and being able to replace Steve,” Rivera said. That means linebackers coach Al Holcomb, defensive line coach Eric Washington and defensive backs coach Curtis Fuller would be the top candidates.

The future of defensive end Julius Peppers remains uncertain, too. Peppers, who turns 38 this month, said he will take some time before making a decision whether to return for a 17th season.

Peppers had a successful season with 11 sacks and two forced fumbles in a situational role and served as a valuable mentor in the locker room to players such as Mario Addison. “He can play as long as he wants, clearly,” said defensive end Charles Johnson.

While linebacker Thomas Davis said “the window is still open” for the Panthers to win a Super Bowl, the reality is this is getting to be an old football team. Peppers is not alone in the long-in-the-tooth category.

Safety Mike Adams will be 37 next season, Davis 35, Olsen and center Ryan Kalil 33, Johnson 32, running back Jonathan Stewart 31, and safety Kurt Coleman and nickel cornerback Captain Munnerlyn will have turned 30. All but Munnerlyn are starters. Olsen thinks the core of the team will remain.

“This is a team that has been very competitive and I don’t see why anyone would come in and mess with that,” Olsen said.

Clearly one of the biggest needs for the Panthers this offseason will be finding some help for Cam Newton, particular a deep threat at wide receiver.

While last year’s second-round pick Curtis Samuel and Damiere Byrd helped fill that role at times this season, neither could stay healthy leaving the Panthers without a player who could stretch the defense.