Leonard Pitts: This is not the book we needed 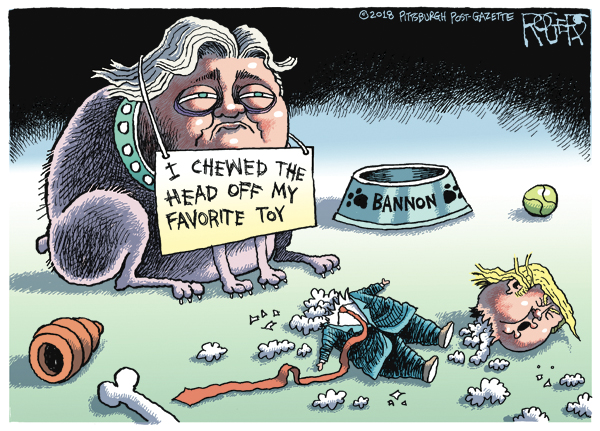 That’s why “Fire and Fury,” by journalist Michael Wolff, which purported to be a fly-on-the-wall, inside view of life in the Trump White House, shot to No. 1 on Amazon.com last week after Donald Trump’s lawyers tried to suppress it. It’s why bookstores had to back order.

Unfortunately, Wolff did not deliver the book he promised. Granted, “Fire and Fury” is juicy as a summer peach, filled with gossipy takedowns of pretty much every boldface name in Trump Land. Anthony Scaramucci emerges as “a shameless self-promoter,” Kellyanne Conway, as an antagonistic drama queen addicted to cable news cameras.

Trump himself, we are told, has a volcanic temper, a toddler’s restraint and likes to be in bed by 6:30, scarfing down cheeseburgers while monitoring cable news on three televisions and calling his billionaire friends to complain when CNN hurts his feelings.

And yes, Steve Bannon’s all over everything. He’s quoted on the record calling Ivanka Trump “dumb as a brick” and her brother, Donald Jr., “treasonous” (though he’s tried to walk back the latter assessment).

The book is entertaining. Too bad it’s not always true.

For example, Wolff reports a snub of the president by Senate Majority leader Mitch McConnell that a McConnell aide says never happened. Wolff has reporter Mark Berman breakfasting in a hotel restaurant Berman says he’s never been to. He misidentifies a nominee to Trump’s cabinet. There’s more, but you get the point.

Look, everybody makes mistakes. But this many of them suggests a reportorial sloppiness that cannot be wished away or ignored.

The sad part is, whatever his fact-checking failures, the consensus among Washington reporters seems to be that Wolff gets it exactly right in his overarching portrait of a chaotic, dysfunctional White House where the inept and the inexperienced are led by the unqualified. But because his credibility is so banged up, that bit of accuracy will be easy for Trump defenders to dismiss.

Yours truly had hoped this book would answer a nagging question about Trump’s White House: What should we make of these people? When they turn reality inside out like a sock, when they stand before calamity and assure us there is no calamity, when they insist Trump is a misunderstood genius whose only problem is our failure to see his greatness, are they lying to us — or to themselves?

The book America wanted and needed might have answered that question. The book America got gives a media-hating president a new cudgel with which to batter honest reporters seeking to unearth inconvenient truths.

But a book organizes what you know in linear form. There’s something about seeing it laid out in black and white, authoritatively analyzed and indexed, that affirms, confirms and makes it official.

Where have you gone, Bob Woodward? Our nation turns its lonely eyes to you.