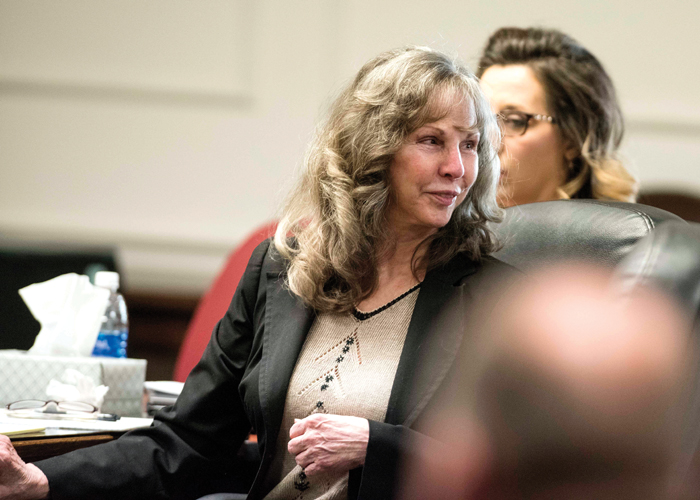 Defendant Marlene Johnson looks over at her family as they are seating the courtroom. Jon C. Lakey/Salisbury Post

SALISBURY — Just more than half the jurors were selected Monday on the first day of the first-degree murder trial for Marlene Postell Johnson, a Mooresville woman accused of beating and stabbing to death a woman she believed was having an affair with her estranged husband.

Johnson, 65, could face life in prison if convicted in the death of 62-year-old Shirley Goodnight Pierce, who Rowan County investigators said was not having an affair with Ervin Johnson.

Ervin Johnson was the chief financial officer and president of Tuscarora Yarns where Pierce was the administrative executive assistant to Chief Executive Officer Martin Foil.

Pierce was found dead in the bathtub of her Evandale Road home in Kannapolis by her fiance, Chuck Reeves. After discovering her body, Reeves left the home and called authorities.

Court documents show that a restraining order that banned Johnson from having any contact with Pierce had expired a few weeks before Pierce’s death.

It was one of several restraining orders and complaints Pierce had filed through the Rowan County court system. In those complaints, Pierce said Johnson repeatedly harassed her and even assaulted her at a restaurant and a fundraiser.

Detectives said in search warrants that Johnson had several pieces of mail that belonged to Pierce in her car and home. Johnson also had surveillance photos and aerial pictures of Pierce’s home.

According to court records, forensic scientists are expected to be called to the witness stand as well as computer experts and friends and relatives of both Pierce and Johnson.

Johnson, who arrived in court before prospective jurors, smiled at her family and sat between her attorneys, James Davis of Salisbury and Jay White of Concord. Superior Court Judge Stuart Albright has banned cameras in the courtroom, except for the first few minutes after Johnson’s arrival into the courtroom Monday. JON C. LAKEY / SALISBURY POST The murder trial of Marlene Postell Johnson, 65, started with jury selection in Rowan County Superior court on Monday morning. Johnson has been in the Rowan County jail since 2013 arrest for the stabbing death of Shirley Goodnight Pierce, 61, in Kannapolis. The trial is expected to take two months to complete. Monday, January 8, 2018, in Salisbury, N.C.

District Attorney Brandy Cook said at a 2013 hearing that she would seek the death penalty in the case, a decision that has since been reversed.

After that initial hearing and finding out that she could face the death penalty, Johnson flung herself off the top bunk of a bed in her jail cell. She had minor injuries including a gash on her head. She was evaluated at the hospital and returned to the county detention center, where she had been held since her July 24, 2013, arrest.

The trial will resume at 9:30 a.m. today with jury selection. The court will select 12 jurors and two alternates. As of Monday afternoon, only seven jurors had been chosen.