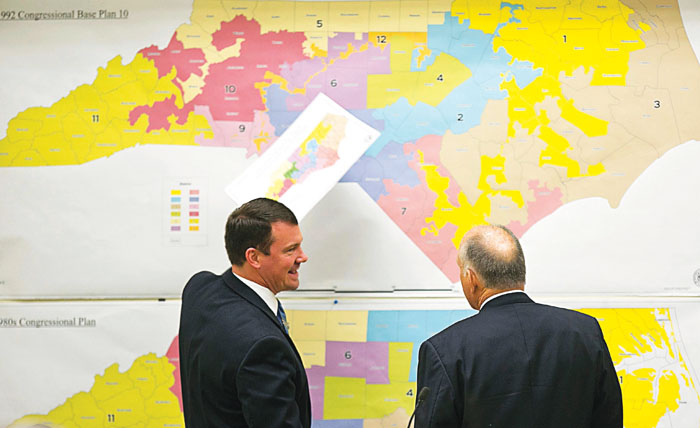 RALEIGH — Federal judges ruled Tuesday that North Carolina’s congressional district map drawn by legislative Republicans is illegally gerrymandered because of excessive partisanship that gave the GOP a rock-solid advantage for most seats. The judges said the map must quickly be redone.

The ruling marks the second time this decade that the GOP’s congressional boundaries in the state have been thrown out by a three-judge panel. In 2016, another panel tossed out two majority-black congressional districts initially drawn in 2011, saying there was no justification for using race as the predominant factor in forming them. The redrawn map was the basis for a new round of lawsuits.

Those who sued argued that Republican legislators went too far when they followed criteria designed to retain the party’s 10-3 majority in the state delegation.

Tuesday’s ruling marks the first time a congressional plan was struck down on partisan gerrymandering claims, according to Allison Riggs, an attorney representing the League of Women Voters of North Carolina and other plaintiffs.

All three judges agreed the “invidious partisanship” in the plan violates the Constitution’s equal protection provision and direction to the state to hold congressional elections because it took the power to elect their representatives away from the people.

“We find that the General Assembly drew and enacted the 2016 plan with intent to subordinate the interests of non-Republican voters and entrench Republican control of North Carolina’s congressional delegation,” U.S. Circuit Court Judge Jim Wynn wrote in the majority opinion. Wynn added that the evidence shows the “plan achieved the General Assembly’s discriminatory partisan objective.”

The judges ordered the General Assembly to approve another set of districts by Jan. 24. Candidate filing for the November congressional elections begins Feb. 12, with primaries set for early May.

A majority of the judges also agreed that the panel would hire a redistricting expert to draw replacement boundaries if the legislature won’t.

Through a spokeswoman, Senate Redistricting Committee Chairman Ralph Hise of Mitchell County said lawmakers plan to appeal. There’s a good chance Republicans will try to ask the U.S. Supreme Court to block enforcement of the ruling until the high court justices rule in a similar case from Wisconsin that they heard in the fall. That case involves legislative districts.

But Bob Phillips with Common Cause, which with other voters filed a lawsuit tried with the League of Women Voters’ case, said, “Politicians will no longer be allowed to use partisan gerrymandering in order to shield themselves from accountability to the public” if the ruling stands.

At the time of the 2016 debate, according to the order, House redistricting chief Rep. David Lewis tried  to justify the criteria by saying, “I think electing Republicans is better than electing Democrats. So I drew this map to help foster what I think is better for the country.”

Wynn and U.S. District Judge Earl Britt agreed that the map also violated the First Amendment rights of Democrats in each district where their favored candidate had little chance to win, burdening their freedom of speech and of association. In a separate opinion, District Judge William Osteen wrote that those who sued had failed to prove those rights were violated.

During a trial in October in Greensboro, attorneys for Republican mapmakers argued that the plaintiffs had blown the partisanship factor out of proportion, saying aspects like incumbent protection and district compactness were considered. But Wynn, in his 191-page opinion, gave lots of credence to the number-crunching of math and political science experts who testified that the only explanation for the 2016 map was partisanship.

Wynn is on a separate three-judge panel weighing whether to accept changes to two dozen state House and Senate districts completed by a special master. Lawmakers redrew legislative maps last August after boundaries originally drawn in 2011 were struck down as racial gerrymanders, but the judges were worried unconstitutional lines remain.

Woodhouse focused his critique on Wynn, a former North Carolina state judge nominated to the 4th U.S. Circuit Court of Appeals by President Barack Obama. Wynn, according to Woodhouse, is “waging a personal, partisan war on North Carolina Republican voters.”