The Pedal Factory will move to East Council Street 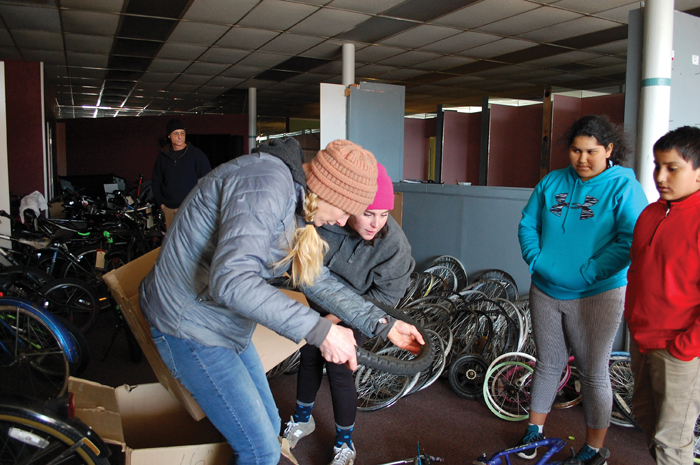 The Pedal Factory's executive director, Mary Rosser (left), helps a volunteer decide whether a tire can be salvaged. Nearly a dozen volunteers came to help Mary and her husband, Todd Rosser, organize bikes that will be moved to The Pedal Factory's new location on E. Council Street. (Jessica Coates/Salisbury Post)

SALISBURY — Todd and Mary Rosser have been running their nonprofit, The Pedal Factory, from an 800-square-foot rental unit for the last two years.

Now they say that it’s time for something bigger.

“This was a really good spot for us to start out with because it fit our budget very well,” Mary said, standing inside the narrow shop. “And, you know, we weren’t afraid to jump into it paying what we did for this. But the roof leaks. It’s not laid out great for a bunch of people to be in here working.”

The Pedal Factory — currently located next to the Empire Hotel at 218-B S. Main St. — helps get bikes into the hands of people who might not otherwise be able to afford them through its Earn-A-Bike program. Participants can volunteer to work on bikes at the shop for six to eight hours and can then earn a bike of their own.

Mary said that, since the nonprofit runs entirely on volunteers and donations, the small space has worked for them for a while.

“But now that this Empire development is kind of becoming more close to reality, it’s like, ‘Well, we need to figure something out.’ And we wanted to find a different space anyway, so it’s worked out,” Mary said.

The new space, located at 311 E. Council St., has two floors and more than 5,000 square feet. Todd said that the bottom floor, which is about 3,000 square feet, would serve as their workplace.

Both Todd and Mary are also hoping to use the larger space for more fundraising and community-oriented events and classes.

Mary said that last year the nonprofit hosted a company’s team-building event, where the company paid for the experience of building bikes together and The Pedal Factory donated the resulting bikes to foster children.

She’s hoping that The Pedal Factory can do more things like that in the future.

“Because when we have workdays it can be very chaotic, and it’s just focused on the Earn-a-Bike projects going on or people’s immediate need repairs. And so it’s really hard for somebody to come in and just learn,” Mary said.

She said that they are hoping to have classes specifically for women, children and veterans, though that list could expand in the future.

“We want to create a space for everybody,” Mary said.

Mary and Todd said that they are hoping the shop will be open in its new location sometime in February.