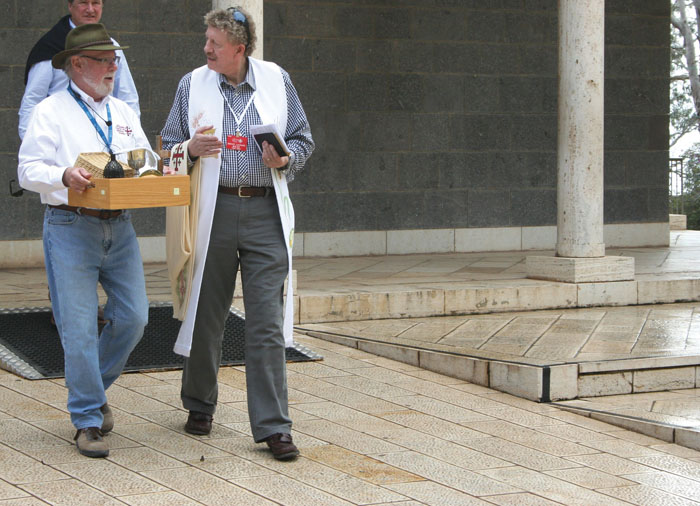 Despite the recent controversy and protests following the president’s announcement to move the U.S. Embassy in Israel from Tel Aviv to Jerusalem, a visit to the Holy Land hosted by the N.C. Synod remains on go.

The trip is led by Dr. Monte Luker of the Lutheran Theological Southern Seminary. Luker led a similar trip from Dec. 20-Jan. 3 with no problems whatsoever.

Still, Lenoir-Rhyne University — of which the seminary is now a part — pulled its endorsement of the trips in response to the violence going on in the West Bank. Even though seminarians will still make the trip, they will no longer get credit, says Bishop Tim Smith of the N.C. Synod.

“It is unfortunate,” Smith said, “but that’s standard procedure. Our plan is still to go.”

Luker has led trips to the Holy Land for 40 years, and has an apartment in Jerusalem at the Olive Tree Hotel, one of the places the group will stay. Luker is also academic dean for the Jerusalem Center for Biblical Studies, and lives in Jerusalem half the year.

The N.C. Synod group, paired with a group from the Florida-Bahamas Synod, leaves Jan. 9. The group will fly into Tel Aviv, then visit sites in Bethlehem, Jerusalem, and Galilee before its return on Jan. 20. The group is comprised of seminarians, members of the bishop’s staff, and travelers from throughout the Carolinas and Florida.

Julie Tonnesen, a graduate of Carson High School and Elon University, is a second-year divinity student at Duke University. She is the daughter of the Rev. Phil and Julie Tonnesen. Her father, a member of the bishop’s staff, will serve as acting bishop while Smith is away.

“I was a little nervous at first to intentionally put myself into a situation that could be potentially volatile,” said Tonnesen, 25. “But the longer I thought about it, I’m saddened by the blatant disregard of the history of Jerusalem by our president.”

Still, Tonnesen said, “I am excited to explore the places I’ve read about, and to interact with people who occupy and live in those spaces today. I’m grateful for the opportunity, and for the assistance from the Synod. I know this trip will inform my ministry. My grandfather is a Lutheran pastor, and his advice was for me to go right away. He did not visit until later in his ministry. So that was definitely encouraging for me to go as well.”

“I’m a rather adventurous soul,” Smith admitted. “When I lived in Berlin, I smuggled money to East German churches. But I am not anxious to be in danger’s way. What I’m more concerned about is taking other people who signed on because I invited them and they trusted me.”

Smith was heartened by the first group’s return without incident.

Luker has an intimate knowledge of the places they’ll visit.

“As always, I will be very careful and knowledgeable of our surroundings,” Luker said. “It’s the Middle East. I’ve been going there for 40 years. We always know we may need to make some changes because of violence, protests, or strikes. We know which areas not to go to.”

Luker said the time for a two-state solution for the Jews and Palestinians has passed.

“The Palestinian leadership has not served its people well,” he said. “I think it’s about time we recognize the inevitable. Jews will move the capital. That’s just the reality. I’m pro-Palestinian, but Jews have a right to have a state there, too.”

“I thought it was the correct decision at the wrong time,” said Dr. Sanford Silverburg, professor emeritus of political science professor at Catawba College.

Silverburg said the decision was made to satisfy the president’s Jewish base and evangelical base. “A lot of his political decisions are based on keeping his base. But it was a terrible decision. He knows so little of the politics of the region.”

The Christian connection to the area, of course, is that’s where Jesus’ ministry took place, Silverburg said. But it’s a small piece of the puzzle in which so much other unrest is taking place, in Syria, and in Iraq, he said. “It’s just going to continue on and on and on.”

Still, Silverburg said, controversy has never kept him from visiting the Middle East. He still lectures there.

“I’ll go anywhere as long as you give me a ticket,” he said.