Just say whoa to Oprah: Get a grip. She should not run for president. 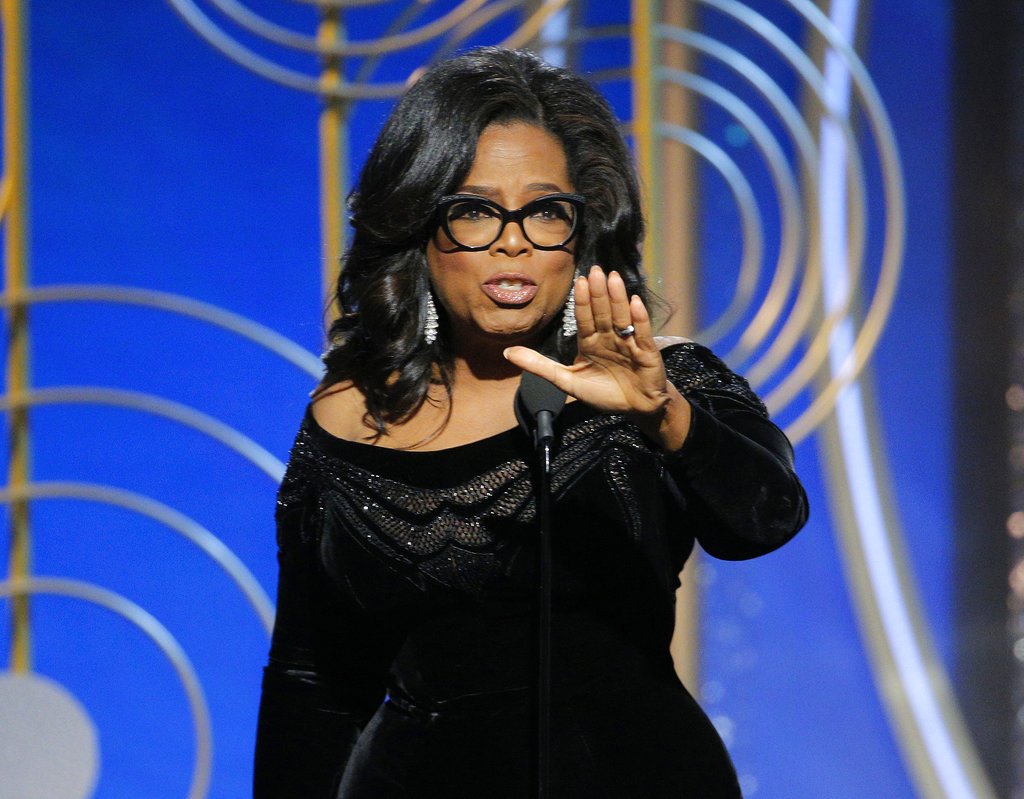 Sunday night at the Golden Globe awards, Oprah Winfrey received a lifetime achievement award and gave a very moving speech, which immediately led all kinds people to proclaim that she should run for president. NBC even tweeted, “Nothing but respect for OUR future president” with a GIF of Oprah. CNN reports that she is “actively thinking” about a potential run, according to friends of hers.

This is not the first time this suggestion has been made, nor is Oprah the first celebrity who has inspired that kind of talk (Dwayne “The Rock” Johnson has said he’s “seriously considering” running). But let’s all take a breath. If you watched her Golden Globes speech and said “She should run,” then the 2016 election and the first year of the Trump presidency have addled your brain.

That’s not to say Oprah didn’t give a great speech, because she did, and speech-making is indeed part of running for and serving as president. Oprah has spent a career talking on television and connecting with audiences, and she’s very good at it.

On the other hand, I could argue that she should be disqualified simply on the basis of her promotion of “The Secret,” a multimedia juggernaut that claimed that the entire universe and every moment of human experience are governed by “the law of attraction.” This is the idea that if you wish really hard for something – say, washboard abs or a new Birkin bag – it will, through the magical power created by your thoughts, find its way to you. With Oprah’s help, and because America produces an endless supply of gullible nincompoops, “The Secret” was a gigantic hit.

Politics has never been immune to other brands of magical thinking, and there are few more powerful ideas among voters than the notion that there’s really nothing to being an officeholder, whether it’s a member of Congress or the president.

An election never goes by without a healthy number of candidates claiming that they’re the best person for the job because they have no relevant experience and know nothing about it. “I’m a businessman, not a politician” they declare, to the nods of their future constituents. If you needed a new roof put on your house and somebody came to you saying, “I’m a computer programmer, not a roofer,” going on to explain that the roofing business is a mess and all you need is some outside-the-box thinking to make your roof better than ever, you’d be a fool to hire him. Yet somehow the same logic doesn’t seem to apply when people think about whom they should elect.

But look, I get it. Democrats have been traumatized by recent events, and one of the responses is to throw up your hands and say, “Fine then. If all voters care about is whether somebody puts on a good show, we’ll just come up with a celebrity of our own.” They look to the recent past and see a bunch of serious, experienced public servants with a deep understanding of policy who would have made fine presidents, but who lost in part because they failed to light up the TV screen: Dukakis, Gore, Kerry, Hillary Clinton. Adlai Stevenson, a two-time Democratic loser, purportedly responded to a voter who told him that he had the support of every thinking person in American by saying that was all fine and good, but he needed a majority. The story may be apocryphal, but it contains an important truth.

It’s true that Democrats have under-appreciated the importance of charisma in presidential politics. But the answer to those electoral failures isn’t to stop caring about substance. It’s to find candidates who are both charismatic and serious, who would be able both to win and do the job once they take office.

Guess what: Democrats have done this before! Bill Clinton and Barack Obama were fantastically compelling candidates who could also talk your ear off about policy. They knew how to work the political system, and they also knew how to sell. And it isn’t as though Democrats are going to have any shortage of choices in 2020. There will likely be at least a dozen people running, and if you’re a Democrat you’re probably going to like at least some of them.

It’s tempting to see all this attention paid to Oprah and say, “Hey, at least she’d be better than Trump.” That’s indisputably true, but it’s also beside the point. The question for Democrats is who would win and who would be the best president out of all the available options. Neither I nor anyone else really knows how she would respond to the challenges of that most challenging job. Being president isn’t like hosting a talk show or running a media brand. Oprah’s success in her field is no more indicative of her potential to be a good president than Trump’s success in real estate was. You can’t criticize Trump for having no relevant experience or evident understanding of public policy, then say that the solution for Democrats is just to throw up their hands and find their own celebrity to promote.

It’s a free country, and Oprah can run if she wants. If she does, she’ll have the chance to make her best argument for why she should be president. But if she ran, the idea of a Trump-Oprah throwdown would make the news media positively vibrate with glee. There’s a strong possibility that, just as Trump did in the 2016 primaries, she’d suck up every ounce of media attention, limiting the ability of the more experienced and serious candidates to make their case to primary voters.

Barack Obama’s route to the presidency started with a great speech, too. But over the ensuing years, he proved he was worthy of the outsize expectations that had been placed upon him. It’s possible Oprah could prove herself worthy of the attention being put on the idea of her running for president. But she certainly hasn’t done it yet, and we should all be extremely skeptical unless and until she shows us why, beyond just being rich and famous, she’d actually make a good president.

Paul Waldman is a contributor to The Plum Line blog, and a senior writer at The American Prospect.