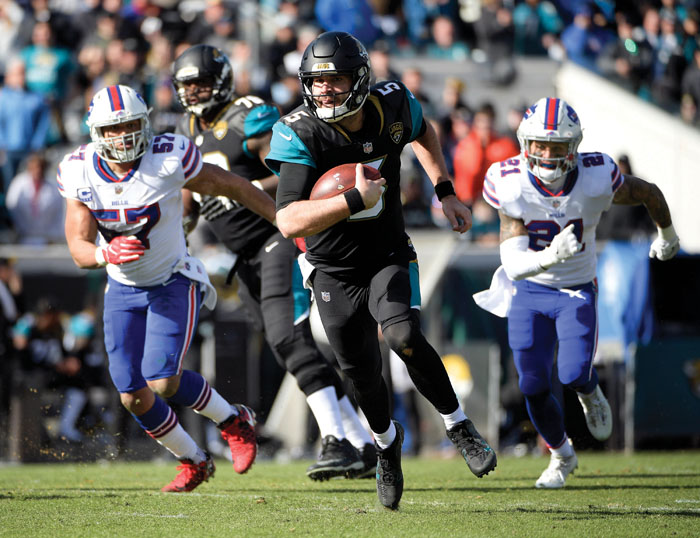 He also knew everyone else wanted to look back at that Week 5 matchup at Pittsburgh.

“I’m sure they’re thinking that game was a fluke,” Ramsey said.

The Jaguars (11-6) will try to prove it wasn’t when they return to the Steel City next week.

The Jaguars stunned Pittsburgh in the first meeting, a 30-9 win in which Ben Roethlisberger threw five interceptions, was sacked twice and finished with the lowest passer rating of his career.

“The game was a great illustration on if we play the way we’re capable of playing, then we can beat anybody like that,” Jaguars cornerback Aaron Colvin said.

“We know they’re going to be motivated. Ben said it earlier in the week or whenever that he wanted to see us again, so we know we’re going to get their best shot. But at the same time, they’re to get our best shot, too.

“Whenever somebody gets our best shot, it hasn’t turned out too good for people.”

The Bills experienced that first-hand in Sunday’s AFC wild-card game.

Tyrod Taylor completed 17 of 37 passes for 134 yards, with an interception, against the NFL’s best pass defense . LeSean McCoy carried 19 times for 75 yards, but a third of those came on one run . McCoy also had 44 yards receiving.

Jacksonville’s offense was even more inept.

Blake Bortles completed 12 of 23 passes for 87 yards, with a touchdown. Bortles was off all day, but made up for it with his legs . He ran for 88 yards, becoming the second starting quarterback in the past 25 years to win a playoff game with more rushing yards than passing. Atlanta’s Michael Vick also did it against the St. Louis Rams in the 2004 playoffs.

“That’s usually not ideal for a quarterback,” Bortles said.

It was enough Sunday, at least with a defense this stingy.

“I think we should hold every team to zero because that’s just the kind of defense we are,” Colvin said. “Teams are going to move the ball and make plays, but at the end of the day, we’re the most dominant defense in the league. We’ve got to hold teams to zero.”

They might need to if Bortles and the league’s top rushing offense don’t play better.

Leonard Fournette ran 21 times for 57 yards against a defense that had been giving up nearly 125 a game. It didn’t help that Bortles misfired early and often.

He put together one decent drive, making as many plays with his feet as his arm, and capped it with a 1-yard scoring pass to backup tight end Ben Koyack on a gutsy, fourth-and-goal call.

“Kind of reference it to a pitcher,” Bortles said. “You go out and something is not right, you don’t have a fastball, you don’t have a curveball. You have to find another pitch to be able to land and be successful and get guys out. That’s kind of the same thing playing quarterback.”

Here are some things to know about Jacksonville’s victory over Buffalo:

McCoy topped 100 yards from scrimmage for the first time in his playoff career. “I’m proud of the way LeSean rose to the occasion,” Bills coach Sean McDermott said. “He battled in there, and it wasn’t easy for him.”

The Bills had plenty of chances down the stretch, but a huge penalty against tight end Charles Clay, a dropped pass by Zay Jones and then a tackle that knocked Taylor out of the game ended any threat of a comeback.

Taylor’s helmet slammed hard against the ground after getting thrown down by Dante Fowler Jr. He had to be helped off the field, forcing backup Nathan Peterman into the game with 1:27 remaining. Ramsey picked off Peterman’s third pass, and the Jaguars ran out the clock.

The Jaguars enjoyed a rare packed house for the franchise’s first home playoff game in 18 years, and thousands of Bills fans tailgated outside EverBank Field and crowded into nearby bars. Coach Doug Marrone gave a game ball to the fans. “It was incredible,” Bortles said.

“There’s not a lot of people outside of Marcedes (Lewis) that have ever seen the stadium like that. … Everyone knows it hasn’t been done in a long time so it was really special to be able to do that.”