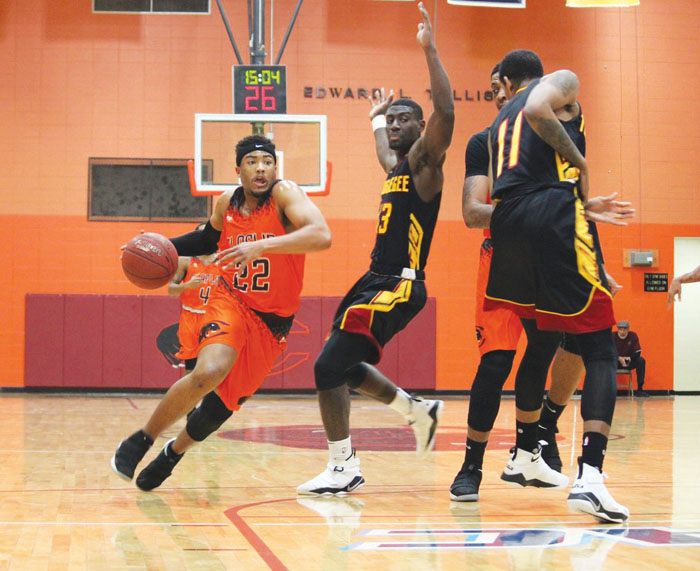 ORANGEBURG, S.C — Benjamin “Tre” Williams is the starting shooting guard for Division II Claflin University, a fact that should provide inspiration for every overlooked, under-recruited high school senior in the country.

The Jesse Carson High graduate didn’t grow up dreaming about playing for Claflin, a 2,000-student HBCU school in Orangeburg, S.C., that is known more for academics than basketball, but as a senior he’s helping the Panthers pursue a dream season. After romping over Tuskeegee on Saturday, Claflin is 16-1 overall and 9-0 in the Southern Intercollegiate Athletic Conference.

Williams ranks second on the team in scoring (13.5 points per game) and steals. He’s third in rebounding, first in assists.

A former high school point guard who has re-invented himself as a college player, Williams has worked to make himself a deadly shooter. In Claflin’s last two games, he’s poured in 35 points, mostly with 9-for-12 accuracy on 3-pointers.

“We’ve all come far together and we all want to win very badly,” Williams said. “We’re fortunate to have one of those teams where everyone is willing to do whatever it takes.”

Williams is playing college basketball mostly because he’s always done whatever it takes. He scored 1,265 points for coach Brian Perry’s Carson program as a three-year starter and led the Cougars to 34 wins his last two seasons.

“He was so good scoring the basketball and he was so good running point guard,”  Perry said. “And he was one of the best leaders on the court we’ve ever had here.”

But Williams barely made a ripple in the recruiting pond. He was under 6 feet and close to 200 pounds, so he didn’t fit the height-and-weight mold college coaches were seeking.

He didn’t check many boxes. He was too short, too stocky and too slow. In high school, he looked physically more suited for the gridiron, and there are small colleges where he probably could’ve made the football squad. A spur at Carson, his interception return for a touchdown propelled the Cougars’ only victory — ever — against West Rowan. That’s still one of the two or three biggest plays in Carson football history.

His strength — as a senior, Williams placed sixth in the shot put and seventh in the discus in the 3A state track and field championships — was seen as more of a burden than an asset by basketball people. Sure, Williams had a nice bench press, but could a guy that stout break a press?

One of the few college coaches who gave Williams the time of day was Davidson County Community College’s Matt Ridge. Even Ridge was lukewarm. Ridge’s school was only 30 miles from Carson, so he he’d seen Williams play, but a chance was all he offered Williams in the spring of 2014. A chance to compete for a uniform. A shot at being on the team. DCCC was good. At best, Ridge figured that Williams might provide depth and competition in practice.

Ridge is a shrewd judge of talent, but Williams has things you can’t appreciate until you see him every day and see him interact with teammates. His heart and head are off the charts. He’s clutch. His unselfishness makes everyone else on the team better, so his teams win a lot. Basically, his teams win games they shouldn’t win.

After a few weeks of practice, Ridge realized all that and became Williams’ biggest advocate. Williams sparked the Storm to a 54-6 record in his two seasons and. He averaged 15.4 points, 7.1 rebounds and 5.4 assists as a sophomore. At 5-foot-11, he led DCCC  in rebounding, and DCCC had recruitable 6-5 studs. A guy who initially had to scrap for a jersey finished his career at DCCC as first team all-region and runner-up for region player of the year.

“He became the backbone of our program,” Ridge said.

Focused exclusively on basketball for the first time, Williams transformed his body during his two years at DCCC. He re-arranged his weight. He got leaner and quicker without losing any toughness. Still, coaches at four-year schools didn’t hammer down Ridge’s door trying to recruit him. Opportunity didn’t arrive until Claflin assistant coach Jonathan Charles was in the house the night Williams logged 24 points and eight rebounds against a talented Sandhills Community College team.

Orangeburg was about 175 miles from home, but Claflin’s academics were appealing to Williams and his family. The school, founded in 1869, was ranked as one of the top 10 HBCU schools nationally. At least one major survey ranked Claflin as the top liberal arts college in South Carolina.

In his junior season, his first at Claflin, Williams played 23 minutes per game for a 17-10 team. He scored in double figures 13 times and averaged 9.1 points and 3.7 rebounds.

“It was kind of up and down for me last season,” Williams said. “I think the change this season is due to  knowing my teammates better, knowing the system better and knowing the expectations of the coaching staff.”

As a senior, Williams has put together a season filled with shining moments.

When Claflin played at Limestone in mid-December, Williams scored Claflin’s last six points in a 70-67 win. He made a go-ahead 3-pointer with 1:41 left. After Limestone came back to tie, Williams put Claflin back on top with two free throws. Then he rebounded a Limestone miss and hit another free throw.

Even Williams’ big finish at Limestone wasn’t close to what happened at Winston-Salem State on Dec. 4.

Claflin looked beaten with 15 minutes left, trailing 51-31. Williams hit two jumpers, a layup and a free throw as part of a terrific rally by Claflin that tied the game at 67-all with 3:48 left. The Rams tied the game at  73-all with 11 seconds left, and Claflin used a timeout.

“We didn’t draw up a play for me,” Williams said. “The plan was just to make sure that whoever had the ball at the end would look to drive, draw defenders and find the open man.”

That open man turned out to be Williams. Claflin had made only one 3-pointer all night, but Williams stroked the game-winner from deep on the right side with 2.8 seconds left. He made the shot with  Xavier Mills, the Rams’ best defender, bearing down on him.

“Making a game-winning shot like that was exciting,” Williams said. “Because of how far we had to come back, that was our best moment of the season. It felt like old times. It reminded me of a game-winner I hit in high school against South Rowan.”

Williams said he doesn’t miss being the point guard, doesn’t mind having the ball in his hands most of the time.

“I really like being the 2 guard,” Williams said. “It’s meant more opportunities for me offensively and defensively.”

Williams still keeps in touch with the Carson program  because his brother, Jailen, who is third in Rowan County in scoring with 17 points per game, is the current point guard for the Cougars. The team was ranked fifth in 3A last week and won its first 13 games — including its first Sam Moir Christmas Classic — before finally losing on Saturday to A.L. Brown.

Tre didn’t get to witness this year’s high school tournament because Claflin was playing in Ohio on the same day of the Christmas Classic championship game. Jailen connected on the game-winning shot against Salisbury in the final.

“I was in Ohio, but my parents were calling me to let me know about Jailen two minutes after the game was over,” Tre said with a laugh. “I’ve seen the video of his shot since then. I’m really happy for Jailen and for all those guys. I watched them grow up. I’ve known them since they were little kids, and I knew Carson would have a great team when they were seniors. They do good stuff. They get along. They’ve got the chemistry you need to win championships.”

Jailen, a slim 6-footer who was an all-county cornerback in football, has something in common with his older brother. He hasn’t attracted an avalanche of recruiting attention, at least not yet. Perry said Division III schools Pfeiffer and Roanoke, and of course, DCCC, have shown the most interest.

“Jailen is having a great year, and I’m sure he’ll hear from more schools as the year goes on,” Perry said. “Someone is going to get a special player.”

Tre doesn’t mind giving advice to his younger brother, who can lead, score, rebound, defend and distribute the ball, but only when he’s asked.  Tre defers to his parents and Carson’s coaches when it comes to guiding Jailen’s future.

Tre is on track to graduate from Claflin next December with a degree in business administration and with a concentration in management. He’s always been a solid student. His time in the junior college ranks wasn’t a matter of pulling up his grades. It was a matter of preventing the door of basketball opportunity from slamming prematurely.

“I don’t have that many basketball games left,” Tre said. “So every one of them is very important.”

Claflin has won 15 contests in a row, hasn’t lost since Nov. 11 and is perfect on the road.  The Paine Lions will visit Claflin’s Jonas T. Kennedy Health and Physical Education Center on Saturday.

Claflin plays in the rugged Eastern Division of the SIAC. Six showdowns will be coming up before the end of the regular season, two games each against Morehouse (13-0), Clark Atlanta (14-1) and rival Benedict (14-3). Claflin will count on Williams to keep doing whatever it takes.

“It’s been great to see Tre having such a good senior year,” Perry said. “He’s one of those kids that you know will be successful regardless of what he decides to do.”