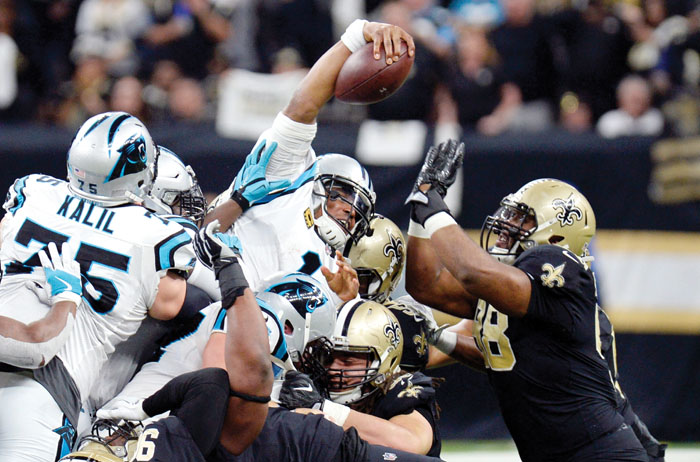 Carolina Panthers quarterback Cam Newton (1) reaches over the pile for a first down in the first half of an NFL football game against the New Orleans Saints in New Orleans, Sunday, Jan. 7, 2018. (AP Photo/Bill Feig)

NEW ORLEANS (AP) — Saints All-Pro defensive end Cameron Jordan grinned playfully as he glanced up at a bottle of red wine in the top shelf of his locker and asked if anyone knew Carolina quarterback Cam Newton’s address.

A bottle with the name “Jordan” on the label — even if it isn’t made by the Saints star’s family — might be the last thing Newton wants right now.

Drew Brees and his receiving corps came through when Carolina stifled New Orleans’ prolific backfield, and a relentless Jordan spearheaded a late defensive stand to seal a 31-26 an NFC wild-card round victory on Sunday.

“You can’t be more happy about the way we played in terms of how we finished the game,” Jordan said. “We almost let them back in the game, but here I am standing as winner. Here I am, as a Cam Jordan, sending Cam Newton a bottle of Jordan wine.”

Brees passed for 376 yards and two touchdowns, but one more completion would have considerably lowered the stress level on the Saints’ sideline. Coach Sean Payton kept the offense on the field on fourth-and-short with two minutes remaining and Carolina out of timeouts, hoping for one more first down that would have allowed New Orleans to run out the clock.

But Brees couldn’t find an open receiver, was flushed out of the pocket and decided his best option was to throw it up for grabs. It was intercepted by safety Mike Adams, which turned out better for New Orleans than an incompletion because it meant the Panthers had to start from their own 31 instead of mid-field.

“I’m frustrated,” Newton said. “I hate that I couldn’t do enough to get a win today for a lot of guys that I think so highly of.

“I just have to be better,” he added. “I’m not going to take the cowardly way and point somebody else out.”

The comeback bid began to fizzle when Jordan induced an intentional grounding penalty on Newton, making it third-and-25 on the Saints 34 and a requiring 10-second runoff that left 20 seconds on the clock.

After an incompletion in the end zone, Vonn Bell sacked Newton on a safety blitz , ensuring the Saints (12-5) swept all three meetings with Carolina (11-6) this season, in addition to winning the first postseason game they’ve played in four seasons.

“The coaches wanted to get the ball out of the quarterback’s hands fast,” Bell said. “They dialed it up and I said, ‘Go make a play.’”

“What we’ve shown offensively is we have a lot of ways to be effective,” Brees said, mentioning clutch first-down catches by Brandon Coleman and Willie Snead in addition to the big plays by Ginn and Thomas. “The ball was spread around quite a bit and guys were making plays when they had the chances.”

Thomas caught eight passes for 131 yards on a day when the Saints needed the passing game to compensate for a ground game that struggled to get going. Thomas said when he noticed the Panthers playing with one safety deep instead of their usual two, “you’re licking your chops with a quarterback like Drew Brees and the talent we have. We knew what we had to do and it was on the receivers.”

Ginn, a former Panthers receiver, celebrated the sweep of his former team by holding up a broom in the locker room.

Helped by the presence of tight end Greg Olsen — who did not play in the teams’ previous two meetings — Newton marched Carolina into Saints territory more often than not. But the Panthers stalled four times inside the New Orleans 25 in the first three quarters. They settled for four field goal attempts on those drives, one of which kicker Graham Gano surprisingly missed from 25-yards.

“Had half of those been touchdowns, we’d be sitting in a different spot,” Jordan said.

Olsen had eight catches for 107 yards and a touchdown.

Newton finished 24 of 40 passing for 349 yards and two touchdowns, including a 56-yard scoring strike to Christian McCaffrey that pulled the Panthers within a touchdown with 4:09 left.

Saints running backs Mark Ingram and Alvin Kamara, who combined for more than 3,000 yards from scrimmage this season, were held to 68 total yards.

Newton was sacked four times, once each by Bell, Jordan, Jonathan Freeney, and David Onyemata. The sack by Onyemata came as Newton tried to spin away from Tyeler Davison and slammed his head into Onyemata’s chest. Newton appeared to be checked for a concussion, but missed only one play before returning to the game on Carolina’s next possession

Newton sat on the field near the sideline after the play, and while a new NFL rule calls for players to be taken to the locker room to be evaluated for concussions if they appear to be struggling to stand, Newton said part of his helmet got pushed into his eyelid. Panthers coach Ron Rivera offered a similar explanation and added that Newton only sat down to give backup Derek Anderson more time to warm up.

The NFL said it planned to discuss the matter with the Panthers medical staff before commenting further.

Panthers: Cornerback Daryl Worley briefly was placed in the concussion protocol but also cleared to return during the game.

Saints: Starting left guard Andrus Peat was carted off the field with a broken left fibula.

Panthers: Begin the offseason after their fourth trip to the playoffs in five years lasted on game.

Saints: Move on to play at Minnesota in the NFC Divisional playoffs.