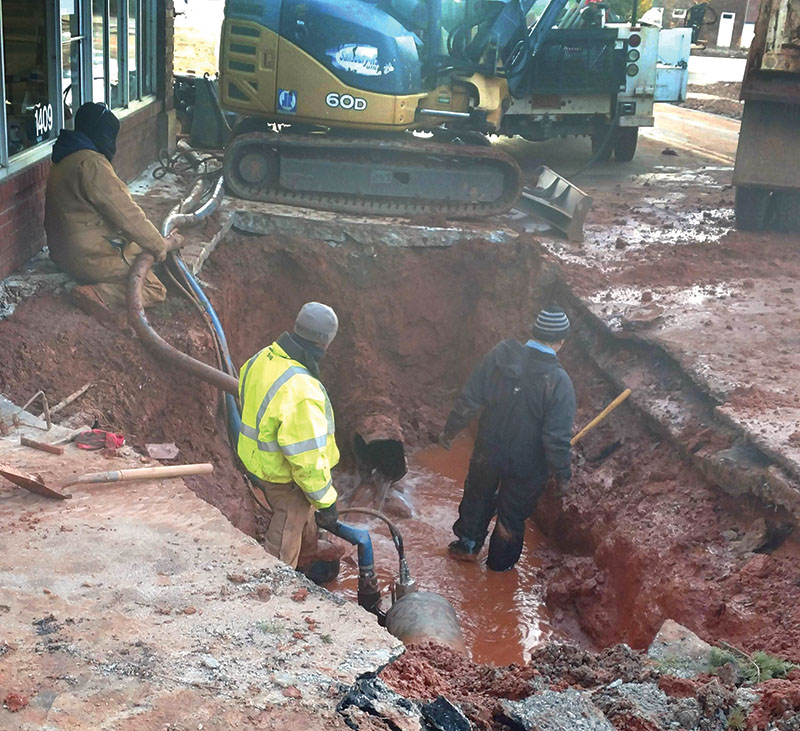 Fulton Street will be closed between S. Main Street and Maupin Avenue until at least Monday

SALISBURY — A water main break at the intersection of Main and Fulton streets Saturday morning led to a sinkhole forming in a neighbor’s driveway and a temporary closure of Fulton Street.

Magen Stewart, who lives in the 1400 block of Fulton Street, said that at approximately 10:30 a.m. Saturday she felt her house shake.

“I guess with that water tower (nearby), the pressure, it was almost like a geyser when it started going,” Stewart said. “Even my walkway from my front door shifted.”

Stewart said that, as the day went on, a sinkhole formed in her driveway and continued to get bigger and deeper.

“It looks like my yard was lifted and dropped back down. It lifted the asphalt on the street completely up,” Stewart said. “…I don’t mean to be dramatic; I really don’t. But it’s really bad.”

Stewart said that the crews from Salisbury-Rowan Utilities had been “awesome” and had been working from 10:30 a.m. — when the pipes burst — until well into the evening.

Salisbury-Rowan Utilities Director Jim Behmer said that Stewart’s house was the only house that lost water service because of the Fulton Street water line break.

Behmer also said that the front of the business next to Stewart, Downtown Graphics, was partially flooded.

Stewart and Downtown Graphics share the driveway where the sinkhole formed.

“You can’t really point a finger with something like this. These kinds of things happen,” Stewart said. “I’m just glad the city’s taking care of it.”

Behmer said that Fulton Street would be closed between S. Main Street and Maupin Avenue until at least Monday. He said that the eastbound lane of the stretch “appears to be compromised,” but that there was a “good chance” that the westbound lane might be open earlier than the eastbound.

Behmer said that his team would work with the city’s public services team today to clean up the street and fill gaps with stone.

From there, Behmer said that the city’s street department team would take over, likely on Monday.

Behmer said that a number of municipal water lines have broken in the last several days, as temperatures continue to hover in the 20s and teens.

Two other water lines broke after the one on Fulton Street Saturday, with one being in the 400 block of Grove Street and the other being near the intersection of Richmond Road and Confederate Avenue.

Temperatures are expected to rise into the 30s today and into the 40s and 50s this week.

But Stewart still has a piece of advice for anyone who wants to be prepared.

“I definitely recommend that people always keep several gallons of water,” she said. “You don’t realize when you’ll need them.”

Stewart and her family got their water turned back on at 7:30 p.m. Saturday.