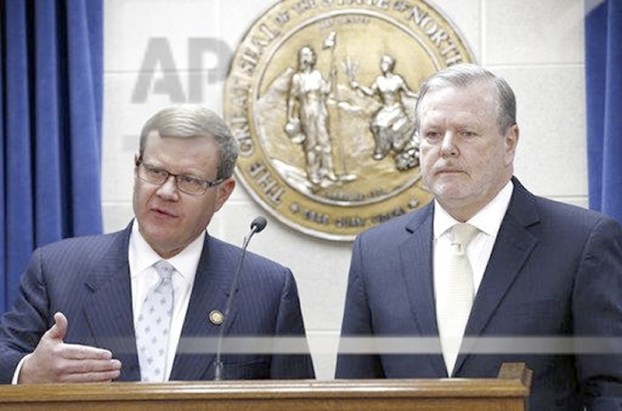 Tom Campbell: A dozen people to watch in NC this year At least a dozen leaders are likely to play a big role in public policy issues in 2018. In order to avoid criticism for any partiality we listed them in alphabetical order.

Phil Berger: Many acknowledge that Senate President Pro Tem Phil Berger is the most powerful politician in the state, but 2018 could be a challenging year for his leadership. In addition to court decisions and an ambitious agenda for the May short session, Berger will be challenged to keep Republicans in charge of the Senate in 2018 elections and also face stiff opposition in his own re-election. How will he respond?

Richard Burr: Our senior U.S. senator rose to national prominence and received accolades for his even-handed leadership of the Senate Intelligence Committee’s investigation of 2016 Russian election interference, but both Burr and the committee went dark in the closing months of 2017. Will Burr re-emerge in 2018 even if the evidence concludes Trump collusion?

Bill Cobey: The former congressman was appointed by Governor McCrory to head the State Board of Education and was given good marks in a challenging environment, but since early 2017 Cobey has become the voice of opposition to a legislature determined to take power from the board, as well as opposing a new superintendent who doesn’t want to work with the board. Will Cobey continue the fight in 2018, grow tired and resign or be replaced as chair?

Mandy Cohen: Dr. Cohen was appointed secretary of the N.C. Department of Health and Human Services after serving as chief operating officer for the Centers for Medicare and Medicaid Services in Washington. She has impressed most everyone with her understanding of healthcare issues, common sense problem-solving approach and her considerable people skills. All eyes will be on her and the department as they initiate Medicaid reforms.

Roy Cooper: Governor Cooper took office facing a hostile legislature that delayed confirmation of his cabinet and key appointments, while also passing legislation designed to change the balance of power in the state. Cooper struggled in his first year as governor and many are waiting to see how he might emerge in 2018.

Dale Folwell: The former Winston-Salem CPA and legislator won election as state treasurer in 2016. Folwell immediately reduced management fees charged on state investments and focused on billions in unfunded liabilities for the State Health Plan and retirement system. He has demonstrated a willingness to face challenges, but can he build consensus for solutions to fix them?

Dan Forest: Re-elected as lieutenant governor, Forest is emerging as the new leader of the Republican Party and is odds-on favorite to oppose Cooper in the 2020 gubernatorial election. Forest is young, articulate, a proven fundraiser and politically astute. Can he build a political platform that will appeal to most elements of the GOP while also attracting unaffiliated voters?

Wayne Goodwin: Former Insurance Commissioner Goodwin took control of a Democratic Party desperately in need following the 2016 elections. If Democrats hope to reduce the state’s majority-Republican delegation in Congress and overturn or reduce veto-proof majorities in the legislature, it falls to Goodwin and party leaders to attract electable candidates, raise money to support them and build grassroots organizations. Even more essential is whether they can put together a message that will energize and turn out more than just their base in 2018.

Mark Martin: The chief justice of the N.C. Supreme Court usually abstains from taking sides in political discussions but Martin faces big challenges from a legislature intent on reforming the judicial process without much input from those impacted by the reforms. Martin previously assembled a group that addressed modernizing courts but most of their findings haven’t gained traction. Will 2018 be the year our chief justice takes a vocal stand on judicial reform?

Mark Meadows: Emerging as a congressional leader in 2017 during the “repeal and replace” Obamacare debate, Meadows’ leadership of the House Freedom Caucus demonstrated the big fracture among GOP members of Congress. Will Meadows’ significance continue to grow in 2018 or will Congressional leadership sideline him?

Margaret Spellings: Former Bush secretary of education, now UNC system president, Spellings faces challenges from all sides, but none more significant than the new UNC Board of Governors. Spellings is nationally acknowledged for understanding today’s challenges in higher education but many question whether she will go head to head with her challengers in 2018 or simply wait out the end of her three year contract.

Beth Wood: Re-elected to a third term in 2016 state auditor Beth Wood has demonstrated a bulldog-like willingness to investigate and report fraud and mishandling of state funds. Republicans and Democrats acknowledge her even-handed pursuit of inappropriate conduct and will be awaiting further reports in 2018.

I dare say that at least one of your family members, friends or acquaintances has either been over-prescribed and is now... read more