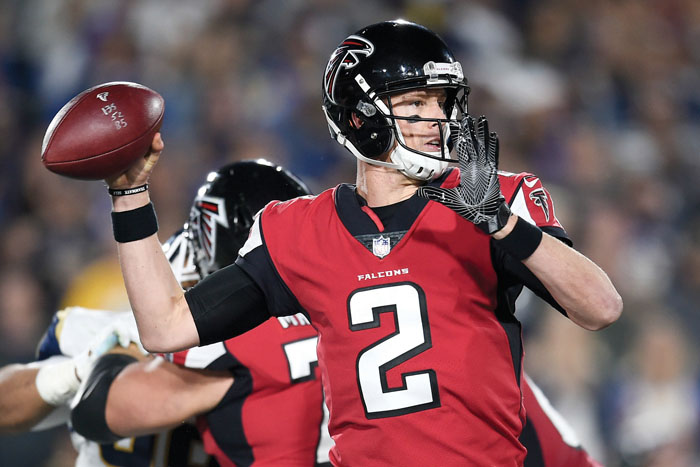 LOS ANGELES (AP) — Matt Ryan and the Atlanta Falcons showed the upstart Los Angeles Rams what playoff poise is all about.

Ryan passed for 218 yards and hit Julio Jones for an 8-yard touchdown with 5:48 to play, and the defending NFC champion Falcons advanced from the wild-card round with a methodical 26-13 victory over the Rams on Saturday night.

Devonta Freeman rushed for an early score and Matt Bryant kicked four field goals for the Falcons (11-6), who spoiled the Rams’ first playoff game in 13 years while showing off the postseason poise they earned from last season’s journey to the Super Bowl.

“This game’s kind of the way our season’s been, tough,” Ryan said. “We had to grind it out. Defense played really well. Offensively, we’re going against a great defense tonight. We ran the football, our guys played up front so hard, and then in the second half we started to get it going a little bit. So, I’m just proud of it.”

Atlanta never trailed at the Coliseum while winning playoff games in consecutive seasons for the first time in franchise history.

The Falcons advanced to face the top-seeded Eagles on Jan. 13 in Philadelphia.

Jones caught nine passes for 94 yards as Atlanta’s offense chewed up the clock and field position. The Falcons jumped to an early 13-0 lead while capitalizing on two early mistakes by Pharoh Cooper, the Rams’ Pro Bowl kick returner.

The Falcons’ defense did more than enough to slow down the NFL’s highest-scoring offense, harassing Jared Goff into a 24-for-45 performance in his playoff debut.

“We knew it was going to take all four quarters,” Falcons linebacker Deion Jones said. “All my guys were ready to fight ‘til the end, and it was great.”

Robert Woods caught nine passes for 142 yards for the NFC West champion Rams (11-6), but rookie Cooper Kupp scored the Rams’ only touchdown late in the first half.

The Falcons ruined a celebratory night for the Rams, who rebounded from a rough homecoming season in 2016 with an outstanding debut year under 31-year-old Sean McVay, the youngest head coach to reach the playoffs in NFL history.

A raucous crowd of 74,300 packed the Coliseum on a crisp evening for the first NFL playoff game in the nation’s second-largest city since early 1994. Los Angeles went 21 years without pro football before the Rams returned last season, and the franchise emphatically ended a 13-year streak of non-winning seasons this fall with an inspiring run to the Rams’ first division title since 2003.

But the Falcons have been here before, and they showed it.

Although the Falcons’ offense took a step back in production this season, Atlanta chipped away at the Rams’ defense throughout the Coliseum return of offensive coordinator Steve Sarkisian, who coached USC here until 2015.

Ryan was methodical under relentless pressure from All-Pro lineman Aaron Donald, repeatedly avoiding trouble and making big throws. Freeman rushed for 66 yards, and Mohamed Sanu had a key 52-yard gain on a fourth-quarter screen pass while finishing with four catches for 75 yards.

Cooper is headed to the Pro Bowl after his outstanding regular season as a kick returner, but the second-year pro’s misadventures in his playoff debut cost the Rams dearly.

He muffed a punt that bounced off teammate Blake Countess in the first quarter, and Bryant subsequently hit the Falcons’ first field goal. After Bryant’s second field goal later in the quarter, Cooper got stripped by Damontae Kazee during a kickoff return at the Rams 32, and the Falcons drove for Freeman’s short TD run.

The Rams’ offense struggled to get moving, but finally figured it out late in the first half. Goff made several sharp throws on a 79-yard drive ending in Kupp’s TD catch.

Los Angeles then got the ball back and mounted another quick drive, but settled for Sam Ficken’s first field goal and a 13-10 halftime deficit.

The Falcons’ offense got back to its methodical work in the second half, mounting two clock-chewing drives ending in field goals by Bryant. The Rams’ defense simply couldn’t get off the field, whether due to missed tackles or clever playcalling by the Falcons.

Los Angeles trimmed the lead to 19-13 with 10:49 to play, but the Falcons made another drive highlighted by that beautiful screen pass from a blitz-avoiding Bryant to Sanu.

Jones then caught the sixth playoff TD pass of his career. Goff drove the Rams deep into Falcons territory, but L.A. turned it over on down at the Atlanta 5 with 2:05 to play. The Falcons stopped the Rams again on downs at midfield with 1:08 left.

After the Falcons’ defensive performance against Goff, they look like a potential problem for the powerful Eagles without quarterback Carson Wentz in the early Saturday divisional playoff game.