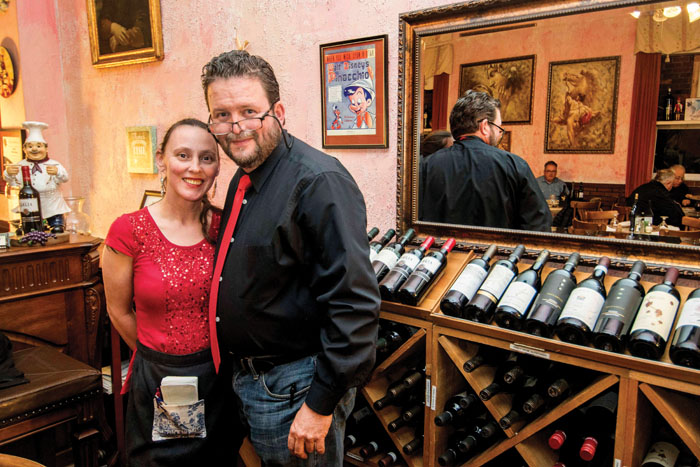 Pinocchio’s Ristorante in Spencer has new owners and new hours, but the same menu that chef Giuseppe Lopriore created.

Michael and Faith Phillips now own the small restaurant, but have kept familiar personnel, such as Rebecca Connell, who was Lopriore’s sous chef. She has has learned all of the recipes and will be the new chef. Anthony Nero, former server, will be back Tuesday-Friday and help manage the dining room.

Lopriore and wife Tracy Aitken are moving to Florida to be closer to her aging parents, and to allow him to go to Italy to help his parents who grow cherries, for four months a year. His mother has been diagnosed with Parkinson’s disease, and his father needs help at harvest time. Giuseppe will work at a restaurant in Florida that will allow him to take the time off.

“We tried to take care of everything last year,” Tracy said, “and Giuseppe was gone for seven weeks. The restaurant was fine, but we decided it was all too much. We both need to be able to do what we need to to take care of our parents. As much as we love our jobs, our customers and the community, it’s time for us to be caregivers.”

Michael and Faith have been regular customers of the restaurant for 10 years and were looking for something that could be a legacy for them.

Both have experience with the corporate restaurant world. “My wife was tired of working for everyone else,” Michael said. He is a veteran and Faith is a firearms instructor in the Lake Norman area. “I wanted to make sure if something happened to me, my wife would have an income.”

Giuseppe has been in the building housing Pinocchio’s for 22 years, first as chef for Uncle Louie’s, owned by Joseph and Leslie Cataldo. He bought the restaurant in 1999 and renamed it La Dolce Vita, then in 2002 changed the name to Pinocchio’s, because he wanted people to know it was child friendly and he hoped it was a name people would remember.

In 2005, Tracy bought part of the business and later the two were married.

“Our children are grown, so now it was time to make the transition,” she said.

They wanted to find someone who would not change Pinocchio’s into “a beer and pizza joint.”  Michael and Faith approached them and said “We’d like to buy your restaurant.”

“It could not have been a better solution,” Tracy said. “We didn’t want to close it. We feel like we have something special here that’s not offered anywhere in our area, so we’re thrilled someone is going to keep it up.”

Tracy and Giuseppe still own the building, but Michael and Faith hope to be able to buy it eventually.

When Tracy and Giuseppe announced the change, they had a surge of customers for a farewell day of food and drink on New Year’s Eve. “It was our biggest sale day ever,” Tracy said.

She collected emails and plans to stay in touch. “This place was my social life.”

“We’re really going to miss the community, how special the community has been to us and how loved we feel. There has been an outpouring of cards and letters and we appreciate all the love and support over the years.”

Michael said he learned a lot in the seven weeks before the official change, and joked that his head was a sponge that was leaking a little because he had absorbed so much.

For brunch, they will bring back favorites from the last time the restaurant served brunch — eggs Benedict, French toast, some sort of quiche or fritatta.

The new sous chef, Monique Woodbury, is well-versed in pastry, so she will prepare special pastries for brunch. Monique has worked for Carowinds in food service, and knows the intricacies of health and food regulations.

Michael and Faith are looking for a server to work all day Saturday and at Sunday brunch.

“We hope to continue a tradition of over 20 years in the making,” he says. People have told them how glad they are the restaurant will continue.

“People are so open-hearted, so big-hearted. We’re both pleasers, personality wise, so we’ll try to be as accommodating as can be. We don’t want people to be disappointed.”

Michael said having Rebecca and Anthony in place has been a big help. “Everyone here is vested in this,” he said.

The new owners will continue to make gelato, a favorite dessert, and they are keeping the special $14.95 menu on Tuesday and Wednesday nights, as well as half-price wine on Thursdays.

Pinocchio’s is located at 518 S. Salisbury Ave., Spencer. The phone number is 704-636-8891. Reservations are always a good idea, the owners say, and are recommended for parties of six or more.