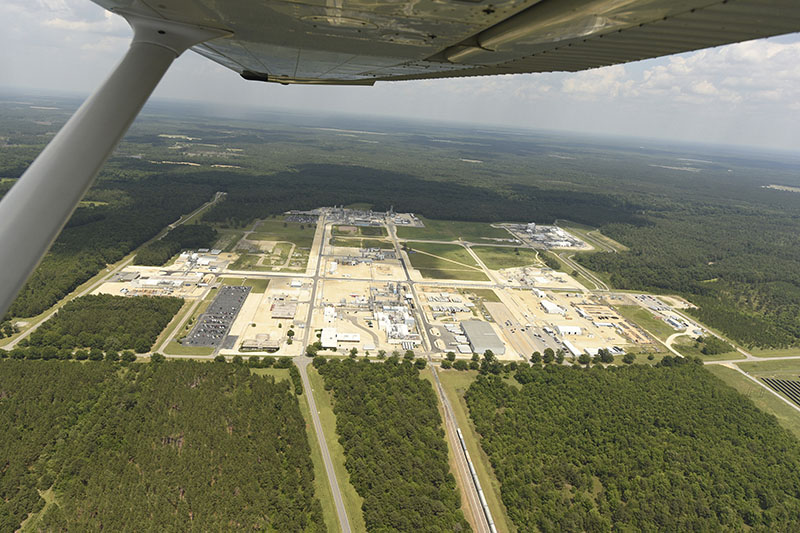 Aerial view of Fayetteville works. The area is a sprawling, 2,150-acre manufacturing site along the Cape Fear River about 100 miles upstream from Wilmington. Three companies have operations there -- Chemours, DuPont and Kuraray America. (Ken Blevins/The Star-News via AP)

As testing reveals an ever-widening web of pollution around the Chemours plant on the Cumberland-Bladen county line, it appears that the General Assembly will soon consider legislation that addresses what could be a major environmental and health threat.

But so far, that legislation doesn’t include what the state needs most as it discovers more pollution with every passing week. It doesn’t include funding. And that’s ridiculous.

The General Assembly’s House Select Committee on River Quality — initially formed in response to discovery of GenX and other “emerging contaminants” in the Cape Fear River — plans to present legislation addressing the growing threat when the General Assembly convenes for a brief session this week. Fayetteville state Rep. Elmer Floyd, a Democrat, says the legislation includes some good provisions, including directing the state Department of Health and Human Services to work with a science advisory board to develop recommended safety recommendations for the chemicals related to GenX. It also orders a review of the permitting process and tells the state Department of Environmental Quality to share its information about GenX and other contaminants with neighboring states.

But what it doesn’t do is provide any money for testing, research, permitting staff or other responses to the extensive pollution problem. This follows on the heels of last September’s showdown between lawmakers and Gov. Roy Cooper. The governor vetoed the first bill responding to the GenX crisis because it didn’t provide any money for the state’s response. Instead, it only appropriated $435,000 for Wilmington-area utilities and UNC-Wilmington to study the problem. The Republican-led legislature promptly and easily overrode the governor’s veto.

Since then, officials have learned that the problem is far more extensive than they knew in late summer. GenX and other chemicals from the Chemours-DuPont complex have been found in lakes and in public and private wells. It appears that the chemicals are also airborne, being blown from the plant across the neighboring countryside. GenX most recently has been found in wells on the east side of the river and state officials have several times expanded the area being tested for the pollutants. GenX and other compounds have been found in about two-thirds of the 350 wells tested so far. That includes several municipal wells serving the Bladen County water system. In about half of the wells where it is present, the state found GenX levels above recommended safety levels. The others were below it. But those guidelines are at best a public-health guess, because there is no definitive research on GenX’s effect on the human body. Research has shown, however, that the chemical causes cancers in laboratory animals and it is a suspected human carcinogen.

Chemours has agreed to stop dumping GenX into the river, but after on-site spills that the company didn’t report to the state, DEQ has moved to revoke the company’s discharge permit.

And yet, the state continues to depend on Chemours to test the wells in a widening radius around the plant. That hardly inspires faith in the residents who live around the plant. Cumberland County is considering ways of extending public water lines to residents in the vicinity of the Chemours plant. That will be an expensive endeavor and we hope the state will provide emergency funding to help make the project happen quickly. As a DEQ spokeswoman said last week, “We do not think this legislation is even a short-term solution without increased funding.”

But at this stage, money isn’t part of the state’s solution, and that’s a worrisome sign that our political leaders aren’t taking this public-health threat seriously. We suggest that they research what happened when similar chemicals were spilled over a broad area around the Chemours-DuPont plants in Parkersburg, West Virginia. It’s a sobering saga.

Meanwhile, there is still plenty of time to add funding to the legislation that will be filed shortly. Until they show us the money, we can’t believe the state is serious about this large, growing and dangerous problem.