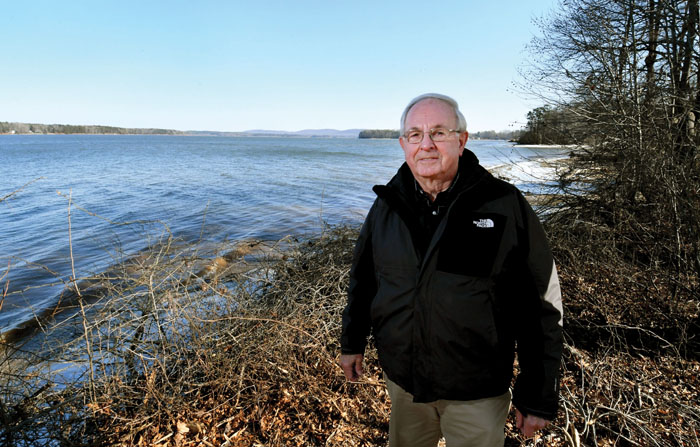 On a blustery January afternoon, Larry Jones stands in his High Rock Lake-front home and enjoys the view.

His home appears built for the purpose. The back wall of is covered in spanning and tall windows, each giving him a view of the deep blue and active waters being churned by the winter wind.

“It’s a beautiful place to be. It really is,” he said, taking in the view. “You wouldn’t get that at Lake Norman. Lake Norman is covered up with really big boats.”

The plan is to turn the lake, currently a “hidden gem” according to Edds, into an economic driver for the county.

In November, Edds assembled a group of individuals called the High Rock Lake Committee to discuss how to bring about this change.

The committee includes representatives from the Rowan Chamber of Commerce and the Rowan Economic Development Commission, as well as members of the High Rock Lake association and area business owners.

Lake Norman, North Carolina’s largest lake, is a routine reference as members of the committee speak. It’s used as a standard for desirable and undesirable aspects as development is considered.

“We’re not Lake Norman, and we don’t want to be,” said Joyce Caron-Mercier, a member of the association and a lakeside resident for years.

“This ties into the Rowan County brand exactly: be an original,” Spalding said. “We are this unique community … . There has been limited development in the past, but there’s certainly the capacity to have some additional development.”

Ideas for the lake include infrastructure updates such as roads and ramps, a new public access point, safety buoys and upscale housing developments.

Step one in the High Rock Lake Committee’s plan to encourage county and resident participation in their revitalization efforts? Address some longstanding myths associated with the water.

“High Rock Lake falls into the category of a lot of other things around Salisbury and Rowan County,” said Jones. “People are very interested in the past and the history of the area.”

But, he said, High Rock Lake has been somewhat stigmatized because of the role it has played to Alcoa with its aluminum smelting operation.

Concerns about the lake are many, said Jones, but recent federal relicensing and the loss of Alcoa have resulted in High Rock Lake being “one of the most beautiful lakes in North Carolina.”

High Rock Lake was built in the 1920s as a reservoir to capture water and maintain water levels of Badin Lake, located downstream on the Yadkin River.

Alcoa’s aluminum smelting pots would need a constant supply of the hydroelectric power provided by turbines at Badin.

Therein, Jones said, the pull from High Rock Lake was near constant. This, Jones said, left the lake with nearly unpredictable levels up until the 1960s.

Alcoa’s end and new federal regulations have changed that. Since 2007, Jones said High Rock has seen more consistent water levels than many other lakes in the area.

Mark Gross is vice president of operations with Cube Hydro, a hydroelectric plant that bought out Alcoa. He said these regulations put limits on how much the company is allowed to draw down water levels and when.

More of a draw down is allowed in winter when more power is needed to keep homes warm. This, he said, is why levels may look particularly low during this period of extreme cold.

“We do our part to generate as much power as we can but stay within our licensing agreement,” said Gross. “ … Our goal is to remain in compliance 100 percent of the time.”

To do this, the company always leaves a buffer, said Gross. Cube Hydro is only allowed to draw down 5 feet between April and November.

Gross said operators try to keep a foot below this maximum, at 4 feet. This, said Larry Jones, is a hardly noticeable difference on the lake’s main body.

According to the North Carolina Department of Environmental Quality, High Rock Lake is impaired on water quality parameters including chlorophyll-a, turbidity and pH.

Chlorophyll-a is an indicator of algae, responsible for the algal blooms and fish kills in High Rock’s past.

Fish kills come when an overabundance of algae reduces the level of oxygen in the water, effectively suffocating marine life.

Recreational uses of the water — boating, fishing and even warm-weather swimming — are not impacted by these levels.

In January of 2017, the division’s Science Advisory Council declared there was no clear evidence that uses aren’t supported.

Jim Hawhee, with the Division of Water Resources, said strategies to measure and reduce levels of algal-supportive nutrients happen every two years.

For High Rock, modeling efforts were concluded in 2016. Strategies for managing nutrients entering the lake from neighboring industries and farms are in talks with stakeholders among the watershed.

“We’re interested in and advocating for clean water,” said Gross with Cube Hydro. “We’re completely engaged in doing whatever we can do as well as providing information to help determine what can be done.”

But, Jones said, these advisories are not unique to High Rock Lake. They also don’t discourage consumption: they merely limit it.

“That fish advisory applies to every body of water in North Carolina,” he said.

Looking toward the future

As public officials and land developers look away from past misconceptions and toward the future, two structural needs become apparent.

Namely, the lake is lacking in Rowan-located public access and safety measures.

“It’s one thing to have the lake,” said Commissioner Edds, “but, if the public doesn’t have a good place to enjoy that lake or to get access to that lake then it’s not helpful.”

As part of the federal relicensing in 2007, Alcoa was required to fund a public access point on Rowan County’s side of the water.

Cube Hydro inherited this requirement with a 10-year timeframe, and they have talks to act soon, said Jones.

The land has already been set aside for the development: a 100-acre track of land accessed off of Leonard Road.

Edds said that public access talks between county managers (Davidson and Rowan) and Cube Hyrdo will take place the second week in January.

Edds said that he would also meet soon with the Davidson County commissioners, discussing the purchase of lighted navigation buoys.

These buoys will help visitors locate themselves in the event of an emergency.

High Rock Lake remains the second largest lake in North Carolina, with over 15,000 acres in surface area and 360 miles of shoreline.

Only a mere 30 percent of that shoreline is developed, said Jones. Therein, there’s much room for growth without danger of interrupting scenic views or creating Lake Norman-like overcrowding, he said.

Chamber president Spalding said that limited development shows that many are unaware of the lake’s presence in our county.

She said the committee is still seeking “volunteer champions” as they work to increase awareness and draw in new residents and businesses.

“We have this wonderful resource right here in our county,” she said. “We want invite folks to come and enjoy it and to encourage people who are already here to access it.”

“I think the overriding sentiment is that High Rock Lake is a jewel of Rowan County,” he said. “It is underappreciated, undervalued and underdeveloped. It’s one of many that the county has.”