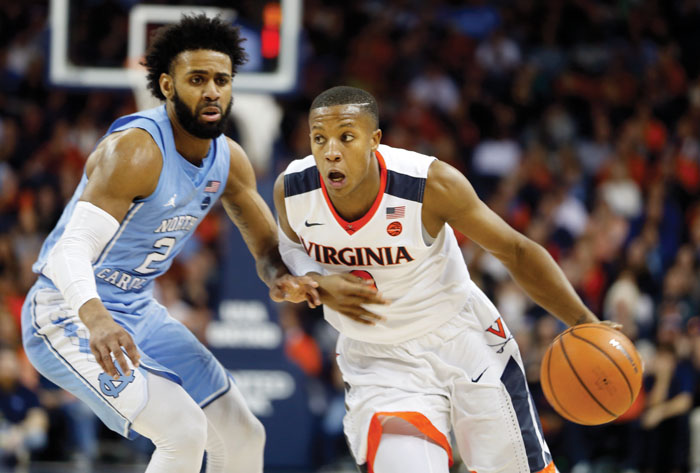 “It was a big ole butt kicking. That’s all it was,” Williams said. “Their defense was a million times stronger than our offense. We didn’t have very good movement.”

Devon Hall scored 16 points and the Cavaliers held the Tar Heels to 29.6 percent shooting (16-54) and scored 25 points off 19 UNC turnovers. The point total was the second-lowest of the season for UNC, which scored fewer only in a 63-45 loss to No. 1 Michigan State on Nov. 26. The offensive struggles for Williams’ team included converting 19 offensive rebounds into just a dozen points.

“Sometimes you recover well, sometimes you get lucky,” Hall said. “The guys might have missed open shots.”

“He seems to have found his groove right now and I’m really happy for him,” Isaiah Wilkins said of Hunter, who led Virginia with 14 points on Wednesday night at Virginia Tech.

The Cavaliers won their sixth in a row and sent the Tar Heels to consecutive losses for the first time since February 2016. North Carolina lost 81-80 at Florida State on Wednesday night.

“I didn’t want him to score,” said Wilkins, who guarded Maye much of the game. “I was just trying to frustrate him and things like that.”

Virginia trailed only briefly and led 35-28 at halftime. The Tar Heels closed it to 54-48 on a tip-in by Cameron Johnson with 7:17 remaining, but Virginia scored the next seven points on baskets by Hunter and Wilkins and a 3-pointer by Ty Jerome. UNC scored only one more point on a free throw by Luke Maye with 3:35 to play. Maye’s make came after he airballed the first attempt, drawing jeers.

“I told Tony (Bennett) that’s about as good a defensive game as anybody has played against us, maybe ever, but definitely in a long time,” Williams said.

Virginia had three takeaways near midcourt, which particularly irked Williams, who compared it to giving the Cavaliers a 6-0 lead to start the game.

The Cavaliers also forced North Carolina into three shot-clock violations, among the moments the crowd at John Paul Jones arena has taken to celebrating wildly.

Hall had one of the breakaways, which he finished with a dunk, and joked about what he thinks about on such breakaways.

“Most of the time I’m thinking about which dunk I’m going to do,” he said as Wilkins scoffed next to him. “I try to keep it simple and make sure I don’t miss it.”

North Carolina: The Tar Heels had a 15-0 disadvantage in points off turnovers in the first half after turning it over 10 times, compared with just four for the Cavaliers. They stayed close with a 23-15 rebounding edge that included 10 on the offensive end, but they scored only eight points off those additional opportunities before the break. They finished with 18 turnovers and were outscored 25-3 off giveaways.

Virginia: Jack Salt doesn’t typically have an eye-popping stat line, but the junior center made several hustle plays that coach Tony Bennett always references when asked about him. The plays included a steal that led to a run-out basket for Virginia, a block and several tip-outs to keep offensive possessions alive. Salt finished with four points and three rebounds.

Virginia is at home for the sixth time in seven games when it hosts Syracuse on Tuesday night.