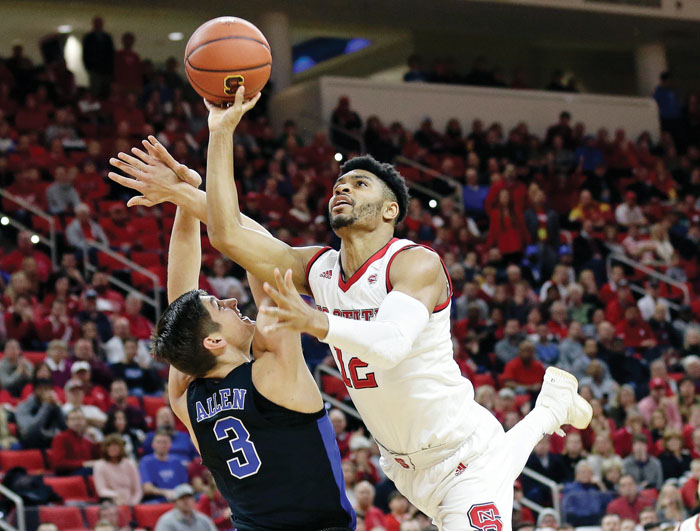 RALEIGH (AP) — North Carolina State coach Kevin Keatts saw his team respond to a pair of double-digit Atlantic Coast Conference losses with a fearless style and aggressive play. And for the second time this season, it was good enough for the Wolfpack to take down the nation’s No. 2-ranked team — this time instate neighbor Duke.

It came roughly six weeks after his team beat then-No. 2 Arizona in an early season tournament.

“I don’t know what my team learned, I know what I’ve learned,” Keatts said. “Every team that we play, I’m going to tell them they’re ranked No. 2 in the country.”

Much like that Arizona win, the Wolfpack (11-5, 1-2 ACC) played with confident control. N.C. State erased an 11-point first-half lead to take a 43-41 lead at the break, then shot 55 percent after halftime and never trailed.

Quite a performance for a team that was coming off an 88-58 loss at Notre Dame on Wednesday, and a 78-62 loss at Clemson before that.

Yurtseven and Dorn (16 points) led six players in double figures for N.C. State, which finished with a 34-32 advantage on the boards against a team that came in ranked second nationally in rebounding margin.

Duke’s offense didn’t have much trouble against the first wave of the Wolfpack’s fullcourt pressure. Star freshman Marvin Bagley III had 31 points and 10 rebounds, and Duke shot 52 percent. But Duke (13-2, 1-2) made just 3 of 15 3-point attempts and committed 16 turnovers leading to 22 points for N.C. State, which celebrated this one with its rowdy red-clad fans charging to midcourt at the horn.

“We did not play with much poise,” Duke coach Mike Krzyzewski said. “I thought we were frantic. Think they made us that way. Obviously they deserved to win.”

Duke: The Blue Devils have encountered plenty of trouble after making the 25-mile drive from campus in Raleigh in recent years. They had lost three of their last five here against the Wolfpack dating to 2010 — including a double-digit loss in their national-championship season in 2015 — and also suffered a first-round NCAA Tournament upset loss to Mercer in PNC Arena in 2014. Now they can add another frustrating moment to that growing list, this one dropping the Blue Devils to 0-2 on the road in league play.

N.C. State: The Wolfpack had managed a big-stage moment once this year with its Arizona win to start the Battle 4 Atlantis in the Bahamas in easily the best win of Keatts’ brief tenure. His team sure found a way to top it.

“We were undefeated when we came to the Arizona game, but we came to this game with a 30-point loss and a 20-point loss before that,” Yurtseven said. “So I think it was just us keeping our heads together and sticking in.”

While the Wolfpack played from in front throughout the second half, it wasn’t until Dorn knocked down those huge 3s that the Wolfpack finally had firm control.

Dorn first hit a 3 from the corner over an oncoming Bagley with 2:02 left and N.C. State protecting a four-point lead. Then Dorn hit one to beat the shot clock on an inbounds pass while being fouled by Javin DeLaurier and ending up on the court, a four-point play that pushed the Wolfpack to a 91-80 lead with 1:06 left.

“The first one definitely felt good leaving my hand,” Dorn said. “The four-point play, when it left, I got hit and it felt good, too. But I couldn’t see it go in because I fell.”

N.C. State repeatedly scored on drive-and-dish plays to go with a 23-for-25 performance at the foul line. To listen to Duke freshman Trevon Duval, the problem was poor communication.

“We didn’t have any communication,” Duval said. “And when we did talk, we did get stops. We just have to do it more consistently.”

The Blue Devils didn’t have sophomore big man Marques Bolden due to a sprained knee.

N.C. State: No. 25 Clemson visits the Wolfpack on Thursday night.