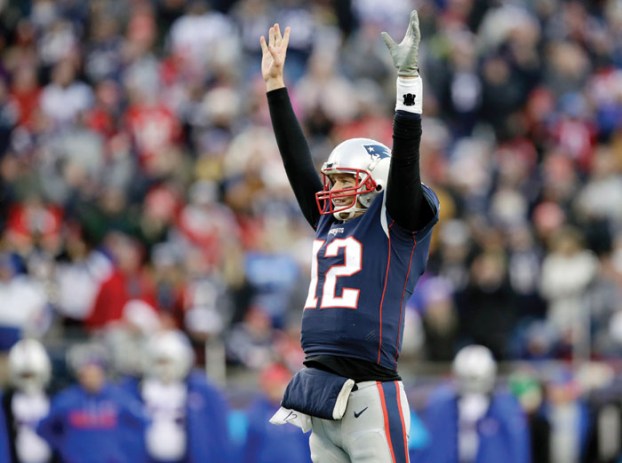 FILE - In this Sunday, Dec. 24, 2017, file photo, New England Patriots quarterback Tom Brady celebrates a touchdown by running back Dion Lewis during the second half of an NFL football game against the Buffalo Bills,, in Foxborough, Mass. Brady and the Patriots again top the AFC playoff field. (AP Photo/Charles Krupa, File)

In a year when two-thirds of the NFL playoff field is new, the AFC still features fixtures Tom Brady and Ben Roethlisberger , who have seven Super Bowl rings between them, and Alex Smith, who is coming off his best season of his 13-year career.

The trio of graybeard QBs led their teams to division titles again this year, and for the second straight season they won’t have to worry about Von Miller wrecking their Super Bowl hopes. The Broncos missed the playoff party again along with the Texans, Raiders and Dolphins, who were here last year.

The AFC gets wild-card weekend started Saturday with the Titans visiting the Chiefs, who haven’t won a playoff game at Arrowhead Stadium in 14 years. On Sunday, the Bills visit the Jaguars.

New England has its customary bye week — its seventh straight — and Pittsburgh earned its first bye since 2010.

Hope: Tom Brady still plays like he’s 30, not 40. He’s a leading MVP candidate again with a league-leading 4,577 yards passing and 32 TDs. He got hit a lot more than he did last season (32 sacks in ‘17 after just 15 in ‘16). But it hasn’t stopped the Patriots from having the league’s second-ranked offense, averaging 28.6 points. A healthy TE Rob Gronkowski , who missed last year’s playoffs, has given the Patriots a huge lift with 69 catches for 1,084 yards. WR Brandin Cooks added 65 receptions for 1,082 yards.

Hope: The “Killer Bs” are in full flight for the AFC North champions. Roethlisberger, WR Antonio Brown, RB Le’Veon Bell and K Chris Boswell are all headed to the Pro Bowl — if the Steelers aren’t playing in the Super Bowl — and rookie WR JuJu Smith-Schuster has given Pittsburgh a youthful jolt. The Steelers averaged 29.9 points a game during the second half of the season and appear plenty comfortable when things get tight. They went 9-2 in games decided by six points or less.

Hope: Defense wins championships. The Jaguars have one of the best D’s in the league — they rank second in points allowed (16.8), interceptions (21), sacks (55) and yards (286) — and they gave up 10 or fewer points in half of their games. Defensive linemen Calais Campbell, Malik Jackson and Yannick Ngakoue, cornerbacks Jalen Ramsey and A.J. Bouye, and linebacker Telvin Smith are the cornerstones of a unit that gives Jacksonville a chance in every game.

Hope: Smith had the best season of his 13-year career , helped along by the best supporting cast he’s ever had. WR Tyreek Hill is a game-changer not only on offense but as a punt returner, RB Kareem Hunt led the league in rushing as a rookie, and TE Travis Kelce has arguably supplanted Gronkowski as the best in the game at his position. And should anything happen to Smith, rookie Patrick Mahomes II proved a capable starter and reliever in K.C.’s 27-24 win at Denver last week, when he returned to lead the team’s successful 2-minute drill to beat the Broncos.

Hope: QB Marcus Mariota has found his running mojo again . Mariota ran a career-best 10 times for a season-high 60 yards last week against Jacksonville in helping the Titans clinch their first playoff berth since the 2008 season, his best performance running the ball since breaking his right leg on Christmas Eve 2016. Mariota showed some serious swagger on the key third-and-5 run for 13 yards that featured a stiff arm on Jaguars safety Barry Church befitting the 2014 Heisman Trophy winner.

Hope: It took 17 years for the Bills to get back to the playoffs after losing to the Titans on the “Music City Miracle” on Jan. 8, 2000. The Bills have exceeded expectations during a season in which they overhauled their roster under the first-year tandem of HC Sean McDermott and GM Brandon Beane. They’re a resilient bunch, overcoming a QB shuffle in which McDermott benched Tyrod Taylor over his pedestrian passing numbers but went right back to him after rookie Nathan Peterman threw five first-half interceptions in a 30-point loss to the Chargers in November.

Nope: Muting their excitement over ending their playoff drought is the uncertain status of RB LeSean McCoy (ankle), who leads the team in yards rushing, receptions and TDs. The Bills are seeking to end another embarrassing drought: they haven’t won a playoff game since 1995.  They don’t have a lot of grizzled veterans to lean on, either, after losing CB Stephon Gilmore in free agency and trading WR Sammy Watkins (to the Rams) and CB Ronald Darby (to the Eagles) in August. Then, they traded their highest-paid player, DT Marcell Dareus, to Jacksonville in October.

The Dope: “I’m the forever optimist, and I know that. But when everyone was talking about us tanking, I was looking around and saying, ‘Man, we better get rid of a whole lot more guys because this team is going to win some ballgames.’ We were able to get hot early, sustain a bad run and make the playoffs at the end.” — C Eric Wood.