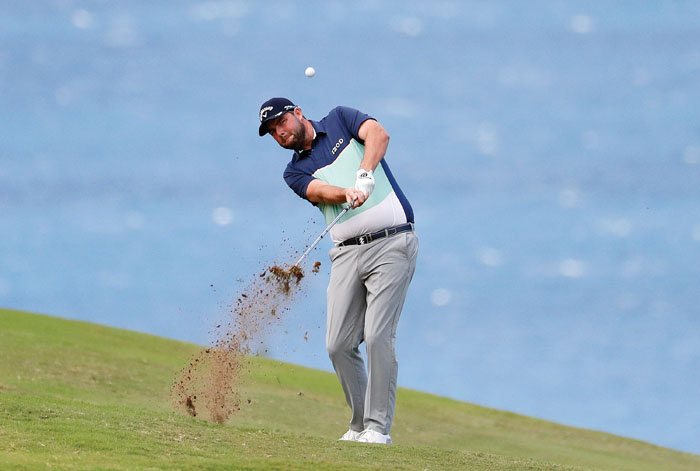 Marc Leishman hits from the fourth fairway during the first round of the Tournament of Champions golf event, Thursday, Jan. 4, 2018, at Kapalua Plantation Course in Kapalua, Hawaii. (AP Photo/Matt York)

KAPALUA, Hawaii (AP) — Marc Leishman picked the wrong bar and wound up with the right girl.

He was a young Australian trying to make his way in American golf. That meant spending most of 2007 driving from one city to the next for Monday qualifiers on the PGA Tour’s developmental circuit. He rolled into Williamsburg, Virginia, one weekend and decided to go for a beer.

“There weren’t many people in the bar,” he said, smiling at the memory. “It wasn’t a great bar.”

But he saw a young woman across the way, walked over to her and asked her where the best places were in town. They hit it off. And when Leishman missed out on qualifying for the tournament, he chose to stay in town because of Audrey Hills, a student at William & Mary.

“I lived out of hotels,” he said. “I’d be in a Motel 6 or a Super 8. You spend as little as possible. If you miss the qualifier, if it was a good town you’d stay there. If it was not a great town, you’d go to the next one and look for the party scene. I stayed there because of that first date.”

They married three years later, and now she is a big part in his mission away from golf.

The Leishmans have started the “Begin Again Foundation,” created to help families who are experiencing medical and life crises. They already have helped 700 families from a foundation that began when he nearly lost the girl he found in a bar.

Leishman was at the 2015 Masters when he left abruptly because his wife was hospitalized with toxic shock syndrome, acute respiratory distress syndrome and sepsis. She was put in a coma and managed to survive, and it was a long road back.

“We were lucky we were in a situation where the medical bills didn’t break us,” Leishman said. “It can break you as a family. And a lot of families don’t have that. When you’re going through something like that, you don’t want to be thinking about money, you’re thinking about your loved one.”

A year after they started the foundation — www.beginagainfoundation.com — Leishman brought more attention to it through his own play.

He had one victory in 206 starts over eight years on the PGA Tour, and while 2017 was a special year for his victories at the Arnold Palmer Invitational and the BMW Championship during the FedEx Cup playoffs, he also remembers it for the timing.

When he won at Bay Hill, his pregnant wife was there with his two sons. The BMW Championship was even more special.

September was “Sepsis Awareness Month,” and Leishman thought about doing something at the TPC Boston until the country was consumed over relief efforts for Houston from Hurricane Harvey. So they waited two weeks for the BMW Championship, handing out ribbons for the players to wear on their caps. Everyone went along.

And then he opened with a 62 on his way to a wire-to-wire, five-shot victory.

It led to Leishman finishing at No. 6 in the FedEx Cup, a breakthrough for someone who had never finished better than 20th. And when the new year started, his two victories enabled him to reach a No. 12 ranking, the highest in the world for an Australian.

“To play like I did, to win the BMW with everyone wearing ribbons, it was impeccable timing,” he said. “It raised awareness, not just for the foundation for us to raise money, but to get the word out there. People might not have heard of sepsis. And if you don’t know the symptoms, you can’t treat it.”

His boys, ages 5 and 4, were with him at the BMW Championship along with their infant sister, Eva. And they have accompanied him to Hawaii, where he began his second Sentry Tournament of Champions by opening with a 67 for a one-shot lead after the opening round.

His next target is to crack the top 10 in the world, perhaps even break through in a major. He came close in 2013 at the Masters when Adam Scott became the first Aussie in a green jacket. Not long after his wife was home from the hospital and headed for a recovery, he lost in a playoff in the 2015 British Open at St. Andrews.

For now, life has never been better.

Leishman is at Kapalua for the tournament reserved only for PGA Tour winners, and the foundation already has helped more than 700 families and is growing.