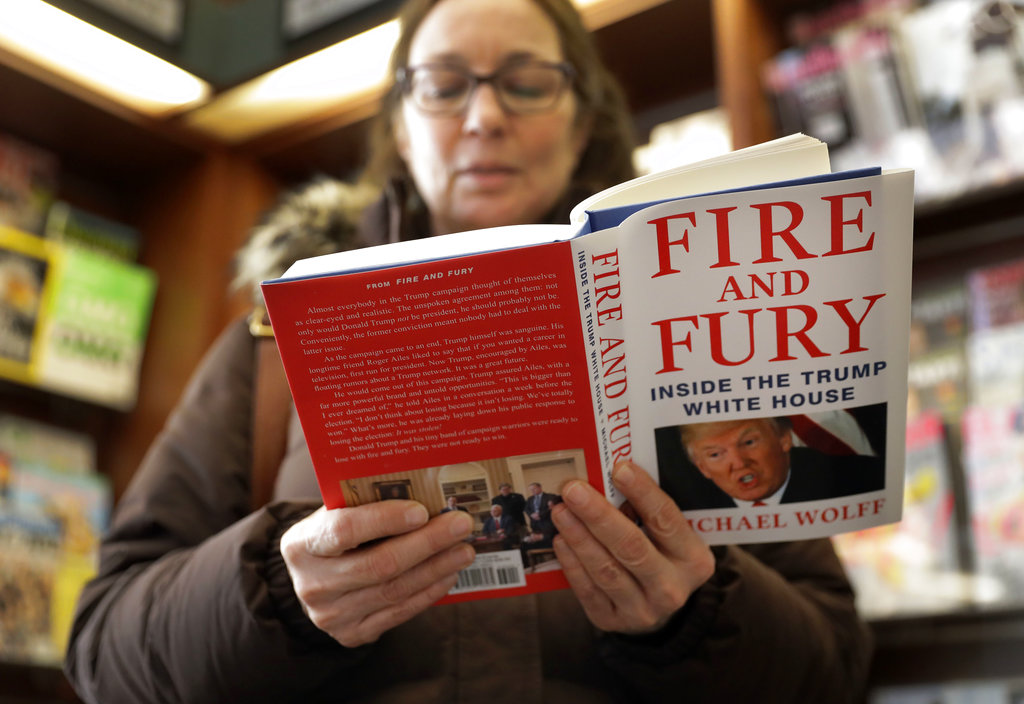 Kathy Mallin, from Glenview, Ill., looks over a copy of the book "Fire and Fury: Inside the Trump White House" by Michael Wolff at Barbara's Books Store in Chicago. (AP Photo/Charles Rex Arbogast)

By David N. Bossie
Special to The Washington Post

At about 2:20 a.m. the morning after Election Day, Kellyanne Conway’s cellphone rang. It was the Associated Press calling the 2016 presidential election for the ultimate political outsider, Donald J. Trump. When the call came there were about a dozen of us, senior campaign staff, along with Indiana Gov. Mike Pence, R, his wife and the Trump family in the residence atop Trump Tower. I remember standing near Melania Trump after Conway shared the news. Mrs. Trump was ecstatic that her husband had just been elected the 45th president of the United States. All of us were. I don’t remember Michael Wolff being in the room.

This week’s effort to undermine President Trump and his administration comes in the form of Wolff’s trashy, headline-grabbing book, “Fire and Fury,” which first lady Melania Trump correctly said belongs in the “bargain fiction section.” The explosive allegations in the book attributed to former White House chief strategist Stephen Bannon are disappointing to many, including me. Bannon must have realized the distraction that such inflammatory rhetoric would do to the momentum of the Trump agenda that’s finally being achieved for the American people. It is inexcusable.

In our own recent book, “Let Trump Be Trump,” Corey Lewandowski and I offered a firsthand account of a campaign the likes of which this country had never seen. From the Mobile, Alabama, “Trumpmania” event in August 2015 to our last stop in Grand Rapids, Michigan, early on Election Day, Trump’s rallies were the driving force of his campaign. Millions of people packed arenas around the country, often standing in line for hours, to see their candidate.

And their candidate did not disappoint. Candidate Trump traveled hundreds of thousands of miles, visiting more than 200 cities over the course of the campaign. He worked 18-hour days, seven-day weeks, for months. At 71 years old, he is a machine. If you couldn’t keep up with him, he’d leave you standing on the tarmac. Trump was motivated, driven and focused on one goal – defeat “Crooked Hillary” and “Make America Great Again.” The idea that he didn’t think he could win, or never wanted to become president, an assertion made by Wolff in his book, is ludicrous on its face. I know because I was there.

By the end of October, our data and poll numbers showed us pulling even with Hillary Clinton. We also knew we had the momentum. Anything can happen on Election Day – we knew that, too – but to say we were shocked by the outcome is nonsense. This is a narrative the mainstream media continues to push in an obvious attempt to delegitimize Trump’s election and his 304 electoral votes.

By the time Bannon, Conway and I took leadership roles in the campaign in mid-to-late August 2016, the president had already steamrolled through his primary opposition and secured the Republican nomination. While we worked incredibly hard for him, no one won the election but him. The truth is, Trump, through sheer will and hard work, was responsible for 99.9 percent of his victory; the rest of the campaign team together accounted for something like 0.1 percent.

Though the president often confronts fake news, of which there is plenty, he now has to contend with a fake book that reads like the National Enquirer on steroids. In the introduction to “Fire and Fury,” Wolff concedes that many of the accounts in the book “are in conflict with one another” and that many “are baldly untrue.” Respectable journalists don’t take liberties like these. Lewandowski and I certainly made sure we took no liberties in our book. We didn’t need to. The facts of Trump’s rise to the presidency are compelling enough without them.

While I can’t know for sure whether Bannon said all of the outrageous things that Wolff alleges, he publicly stated this week that he wants Trump and his “America first” agenda to succeed.

Make no mistake, from the beginning, long before the campaign officially began, Trump himself decided on the agenda to Make America Great Again and he has worked to make his agenda a reality.

That goal is shared by all of us who work for and support Trump and by the 60-million-plus Americans who voted for him. Over the past year, Trump has enacted historic reforms that are making America safe and prosperous again. Bannon should clear the air so that we can all get back to the business of Making America Great Again.