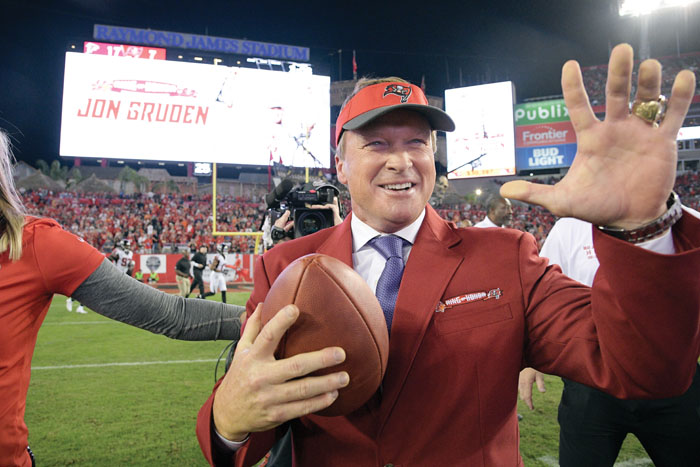 FILE - In this Dec. 18, 2017, file photo, former Tampa Bay Buccaneers and Oakland Raiders head coach Jon Gruden reacts after being inducted into the Buccaneers Ring of Honor during halftime of an NFL football game against the Atlanta Falcons, in Tampa, Fla. The Oakland Raiders are set to bring Jon Gruden back for a second stint as coach. A person with knowledge of the team's plans said the Raiders are planning a news conference Tuesday to announce that Gruden is leaving the broadcast booth to come back to coaching. The person spoke on condition of anonymity because the team has made no formal announcement.(AP Photo/Phelan M. Ebenhack, File)

There was a Super Bowl trip the following season when Oakland lost to Gruden’s Buccaneers and another playoff appearance in 2016 under Jack Del Rio that garnered little optimism because quarterback Derek Carr was injured.

But there has been mostly a run of losing seasons under nine coaches as only the Cleveland Browns had lost more games during Gruden’s 16-year absence than the Raiders.

Owner Mark Davis hopes that will all change now that he has finally lured Gruden back for a second stint as the team’s coach.

A person with knowledge of the team’s plans said the Raiders are planning a news conference Tuesday to announce that Gruden is leaving the broadcast booth to come back to coaching. The person spoke on condition of anonymity Friday because the team has made no formal announcement.

The Raiders fired Del Rio following a disappointing six-win season and talk immediately turned to Gruden, who has been out of coaching since being fired by Tampa Bay following the 2008 season. Gruden has spent the past nine years as the lead analyst for ESPN’s “Monday Night Football” telecast. He is scheduled to work his final game Saturday in Kansas City when the Chiefs take on the Tennessee Titans in a playoff game.

Then after that he will head to Oakland with the task of resurrecting Carr after a down year and getting the Raiders back to the postseason.

Oakland won 12 games in 2016 to earn Del Rio a four-year extension but the team fell flat this season. The offense regressed after the decision to fire coordinator Bill Musgrave and replace him with untested Todd Downing. The defense struggled mightily before a late-season switch from fired coordinator Ken Norton Jr. to play-caller John Pagano.

That led to the decision to fire Del Rio following his third season and go hard after Gruden.

ESPN reported that Gruden will receive a 10-year deal that could be worth close to $100 million. Gruden has already started putting together a staff with Cincinnati defensive coordinator Paul Guenther among those expected to join.

Gruden told ESPN earlier this week that he had a good talk with Davis about returning to the organization and believed there was a “good chance” it would happen.

His tenure ended shortly after the “Tuck Rule” loss to the New England Patriots when he was traded the following month to Tampa Bay for two first-round draft picks, two second-rounders and $8 million.

Gruden’s younger brother, Jay, is headed into his fifth season as coach in Washington. Jay was an assistant on Jon’s staffs in Tampa Bay and now the brothers will be competing against each other. Washington and Oakland are not scheduled to play again until 2021. This is not the first time two brothers have been head coaches in the NFL simultaneously. Jim and John Harbaugh were active for four seasons from 2011-14 in San Francisco and Baltimore, respectively. John’s Ravens beat Jim’s 49ers in the Super Bowl following the 2012 season

A second person with knowledge of the team’s plans said one of the minority candidates who interviewed was tight ends coach Bobby Johnson. The person spoke on condition of anonymity because the Raiders were not releasing the names of candidates.

This would not mark the first time the Raiders brought back a coach for a second stint. Late owner Al Davis hired Art Shell in 2006, 11 years after firing him the first time. Shell went 2-14 that season and was fired after one year.

Other teams have also done it, with one of the most recent notable coaching hires being Joe Gibbs in Washington. Gibbs stepped away following the 1992 season with three Super Bowl titles in his career. He came back in 2004 and had a 30-34 record in four seasons, leading Washington to two playoff berths.

The timing of the news conference was first reported by the Raiders Snake Pit website.