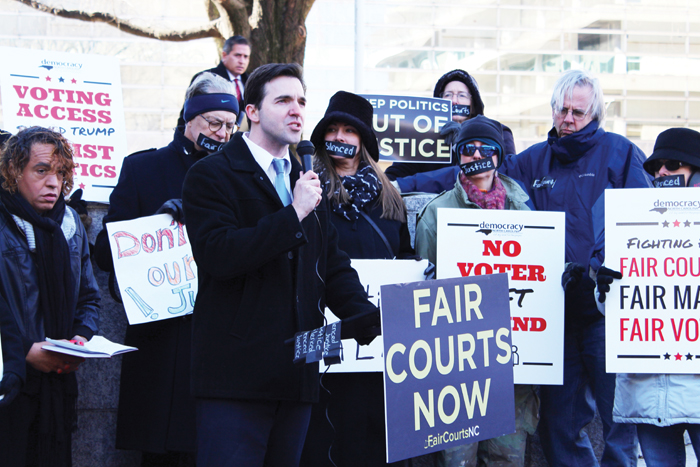 CHARLOTTE — A “silent march” protesting proposed judicial redistricting and changes to the way judges are seated was held in Charlotte on Thursday.

It was held a week before a special session of the General Assembly.

Protesters said the changes would move control of judicial choices into the hands of lawmakers rather than voters.

Some 42 people participated in the march, despite late-morning temperatures that hovered around 30 degrees.

Gail Young, director of Citizens in Action NC, said the march was an effort to speak out about legislators trying to “stack the deck in their favor.”

“We’re here today because we’re frustrated with what the General Assembly is trying to do to the judiciary system in North Carolina,” Young said. “… We’re trying to keep from having the death of democracy here in North Carolina.”

Protesters walked two by two from Romare Bearden Park to the Mecklenburg County Courthouse, where a news conference was held at noon.

Delores Hurt, president of the League of Women Voters Charlotte-Mecklenburg, called the proposed legislation “the General Assembly’s attack on an independent judiciary.”

“The goal is not to improve the condition of the judiciary of the state, but … (to) destroy the pillar of the separation of powers we have long cherished in this country,” said Hurt.

Both Hurt and Young said the proposed changes are in response to recent rulings that blocked illegal actions and laws that would have hindered minority voters. Young said lawmakers are trying to rig the system in their favor.

“It’s kind of like ‘We can’t win the game, so let’s hire all the referees in our favor,'” said Young.

Whether or not the General Assembly will address judicial redistricting in the special session that starts next Wednesday remains uncertain.

House Speaker Tim Moore said redistricting should take precedence over judicial reform and should be handled in the House on Wednesday.

The maps need to be settled upon before filing, which is slated for June after February primaries were canceled last October.

In contrast, Senate leader, Phil Berger, said that there is too much work to be done on redistricting maps for them to be considered next week.