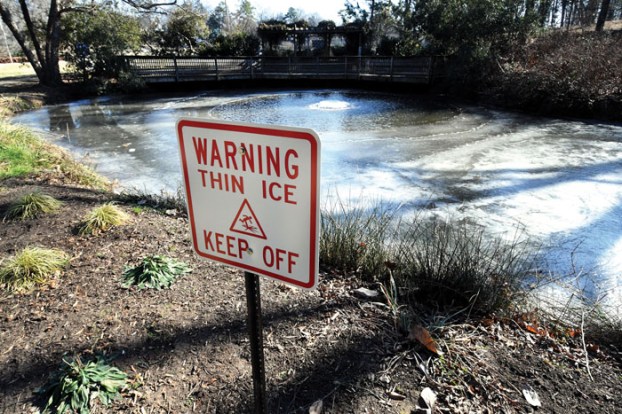 Ice covers a pond at Hurley Park. The city of Salisbury is warning residents and user of city parks to be mindful of thin ice that covers the surface of the creeks,ponds and lakes. Three years ago, an 8-year-old Salisbury boy fell through thin ice and drowned in Hurley Park Jon C. Lakey/Salisbury Post

SALISBURY — With temperatures plunging below freezing for days on end, ponds, lakes and creek edges are beginning to wear a thin coat of ice.

While most adults know better than to trust the treacherous surface, emergency and fire personnel warn that the thought of slipping and sliding across the ice can be a siren call for children.

It’s a fact they learned through harsh experience. On Jan. 11, 2015, 8-year-old Kymello McLane, a second-grader at Overton Elementary School, fell through thin ice at Hurley Park and drowned.

Kymello was with two friends who called for help and pointed firefighters to the place he went under. But by the time firefighters located him — by using poles to poke holes in the ice — it was too late.

Kymello’s friends, both 11, said he was walking on the iced-over pond and fell back, breaking through the ice.

Salisbury Fire Department Battalion Chief Jay Baker encouraged parents to keep an eye on children and to resist the temptation themselves.

Temperatures in North Carolina are rarely cold enough for long enough to create a solid base of frozen ice. Baker said that in order for water to freeze solid, the temperature has to be consistently below 32 degrees for a “sustained period of time.”

And even then, he said, a pond or other body of water may not be frozen all the way across.

“It’s going to seem solid, but as you get out toward the middle you’re going to have warmer water,” he said.

That water wouldn’t freeze as hard — or at all — and the ice around it may be thinner.

There are some situations in which people may feel they need to risk the ice — like if a pet runs out on a pond and gets stuck. In that case, Baker’s advice is simple: “Call the professionals.” Fire or rescue personnel are better equipped to handle ice-related emergencies and know how to do so safely, he said.

If you or a loved one does fall through ice, there are some things you should do. If you’re on shore, call 911 immediately. But if you’re the one who’s fallen through, “Get out the best way you can,” Baker said.

In some cases, you may be able to grab the edge of the ice and use that to haul yourself out of the water.

If you’re with a friend who falls through the ice, make sure to mark the place where he went under for rescue personnel.

And once you’re safe from harm, get warm as soon as possible and keep an eye out for signs of hypothermia, including violent shivering, slurred speech, confusion, weak pulse, shallow breathing or progressive loss of consciousness. If these signs appear, call 911 immediately.

SALISBURY — More than 100 Livingstone College students were forced to move house because of a broken water pipe at the school’s Honors... read more