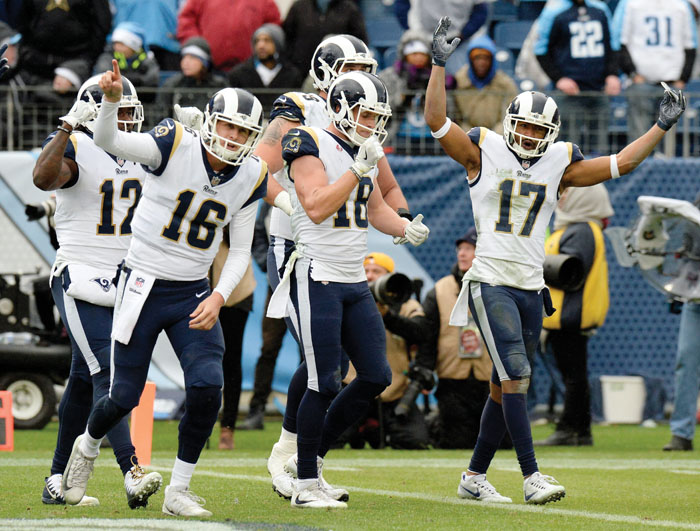 FILE - In this Dec. 24, 2017, file photo, Los Angeles Rams quarterback Jared Goff (16) and celebrates with wide receiver Cooper Kupp (18) after Kupp scored a touchdown against the Tennessee Titans in the second half of an NFL football game in Nashville, Tenn. The Rams, who are in the playoffs for the first time since 2004, host the Falcons on Saturday in the showcase of wild-card weekend. (AP Photo/Mark Zaleski, File)

In the topsy-turvy NFC playoffs, only the Falcons return from last year, and they sneaked in as the sixth and final team. They narrowly avoided the same fate as the Cowboys, Seahawks, Packers, Giants and Lions — all sitting this one out.

The top five seeds are newcomers, led by the Eagles. They are going with a backup quarterback and are making their first trip to the postseason party since 2013. The Vikings are back after a year away, hoping to become the first team to ever play a Super Bowl in its home stadium .

The five new teams went a combined 32-48 in 2016 but 59-21 this season, providing hope to all those franchises and fans who are already preparing for free agency and the draft.

The field features just two Super Bowl winners, the Rams at the turn of the century when they were based in St. Louis, and the Saints in 2010, when they upset the Colts and Peyton Manning.

The Rams, in the playoffs for the first time since 2004, host the Falcons on Saturday in the showcase of wild-card weekend. The Saints, who ended a four-year playoff drought, host the Panthers on Sunday.

Strength and weakness of each team:

Hope: The Eagles have the NFL’s third-ranked rushing offense with three productive backs: Jay Ajayi, LeGarrette Blount and Corey Clement. They’ll have to rely on them more to take pressure off QB Nick Foles and a passing attack that has struggled since second-year sensation Carson Wentz tore his left ACL in December, a major blow to the Eagles’ bounce-back season .

Hope: The defense , with all due respect to QB Case Keenum and the job he’s done. The Vikings ranked second in the league in both fewest rushing yards and fewest passing yards allowed, so there’s not really a one preferred way to attack them. No team gave up fewer points, either. With Pro Bowl picks at each of the three position groups yet a selfless attitude that’s kept individual players from chasing splashy plays or padding statistics at the expense of the scheme, coach Mike Zimmer’s unit will be a challenge for any opposing QB, especially in Minnesota at raucous U.S. Bank Stadium.

Hope: Although Brees passed for his fewest yards (4,334) since joining the Saints in 2006, he was as efficient as ever, setting a single-season record with his 72 percent completion rate. And Brees didn’t need to throw as much because the Pro Bowl running back tandem of Mark Ingram and rookie Alvin Kamara combined for 1,852 yards rushing. They also performed well as receivers, particularly on screens, each gaining more than 1,500 yards from scrimmage.

Hope: They have one of the league’s best defenses behind LB Luke Kuechly, LB Thomas Davis and DE Julius Peppers. They also have more playoff experience than any team in the NFC playoffs — by a wide margin — and a versatile former league MVP at quarterback in Cam Newton . Carolina has three times run for more than 200 yards in a game this season, and that bodes well for the playoffs where the ground game is magnified.

Nope: Despite an 11-5 record in the toughest division in football, the Panthers don’t match up well against first-round foe New Orleans and could be one and done. The Saints beat them twice in the regular season by a combined score of 65-34. If Carolina can get by the wild-card round, it has the potential to make a deep run. But the pressure will be on Newton to perform because Carolina’s wide receivers aren’t going to scare anyone.

The Dope: “We all know what they say about pressure, that it does one of two things. We’re hoping to shine like diamonds on Sunday.” — Newton.