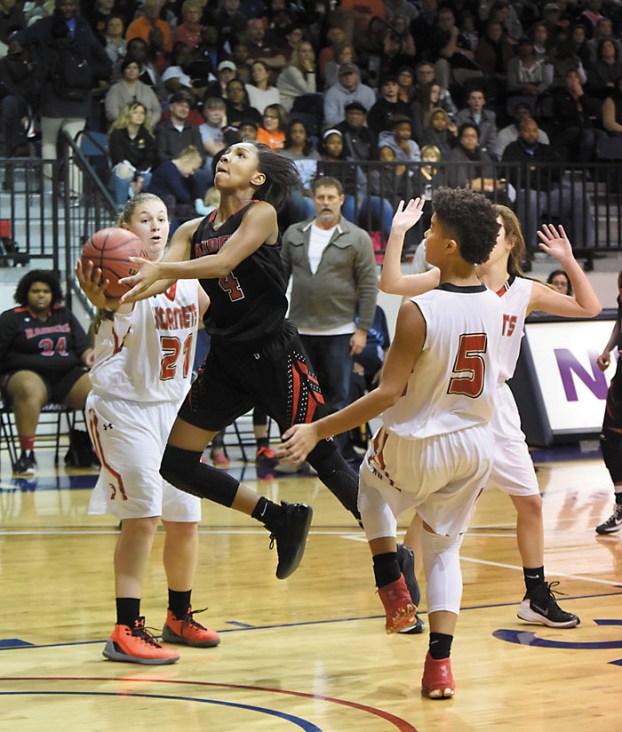 The Raiders did it again on Friday, this time winning in ninth-ranked Salisbury’s gym. Despite missing two injured starters, South prevailed in overtime, 65-58.

“The girls did everything I asked them to do,” South coach John Davis said. “We’re beat up right now, really banged up without Tazah Hardin and Brooke Lowery, but the girls went out and executed the game plan on offense and defense. I couldn’t be prouder of this team than I am right now.”

South junior Janiya Downs scored 26 points and pulled down 20 rebounds, coming back strong from a bruising fall that knocked her out of South’s loss at West Rowan on Wednesday. Senior Riley Corriher scored 13, including nine in the fourth quarter. Making her first start of the season replacing Hardin, senior Jalee Rollins had the biggest game of her career with 12 points. She’d scored nine all season prior to Friday’s Central Carolina Conference game.

“When people are hurt, other members of the team have to come through, and then when those injured players come back, the team can make a strong run,” Davis said.

The road win elevated South, competing in 2A for the first time in school history, into the thick of the conference race. Salisbury and Ledford are 8-1, with East Davidson at 7-2 and South at 6-2.

South (9-5) took a 30-23 halftime lead on the strength of Downs’ dominant second quarter.

Downs nearly won the game for the Raiders at the end of regulation, but her put-back try in the lane rolled around the rim several times before spinning out.

“It just wasn’t meant to be — well, at least not in regulation,” Davis said.

South controlled the overtime with defensive effort, shutting down the high-powered Hornets.

“Everyone just played really well, carrying out their assignments, and Riley (Corriher) did a heck of a job against (sophomore point guard) Anayia Fulson,” Davis said.

Bryanna Troutman scored 19 to lead the Hornets. Jinika Glenn, coming off a big Christmas tournament, shined again with 14 points. Lexi May scored 10, but the Raiders held Fulson and high-scoring senior Maria Capito to a combined 10. Those two usually get close to 30.

Salisbury gets a chance to bounce back right away against North Rowan tonight at Catawba College.

NOTES: Lowery is expected to miss a few weeks with a stress fracture. Hardin, South’s No. 2 scorer and a second team all-county player last season, has been diagnosed with a knee injury and may be out for an extended period.