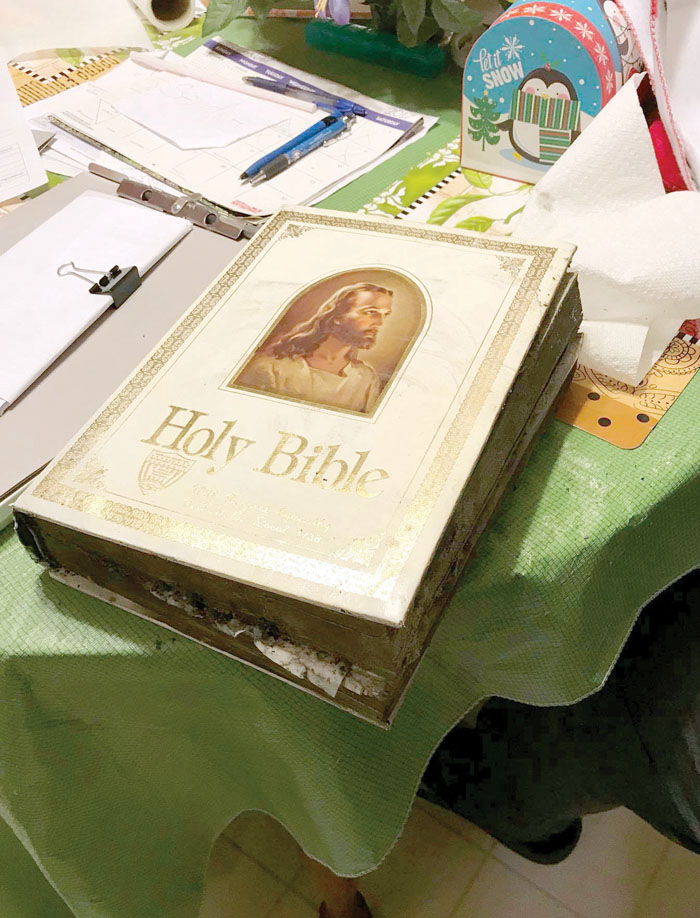 This family Bible is the only item that survived a Wednesday house fire where homeowners Roy and Chi Chi Leazer lost everything they owned. The fire occurred at 418 Robinson Road, just beyond Royal Giants Park in East Spencer. Submitted photo

EAST SPENCER — A veteran firefighter returned a priceless item to a local couple after a devastating fire at their Robinson Road home — their family Bible.

The fire occurred Wednesday afternoon at 418 Robinson Road. It destroyed the house and the belongings of Chi Chi and Roy Leazer — except for the Bible.

Investigators said the fire began in the garage near a water heater.

The Leazers ran from the brick home with only the clothes on their backs and their two dogs, Coco and Lady. Initially, they thought a tree had fallen on their home. When they ran outside to see the damage, they saw the garage and the rest of the house on fire.

Large plumes of black smoke could be seen from Interstate 85. It took multiple firefighters from several departments hours to extinguish the fire. The fire reignited later Wednesday night.

Miller’s Ferry firefighter Ken Womble found the white Bible in a hallway near the front of the house. He said he saw the Bible lying on top of debris and rubble.

“It looked like the fire burned around it,” Womble said.

The Bible had water damage, and the edges of the pages were blackened. But Womble said he was surprised to see the Bible in relatively good condition.

Womble, who has been a firefighter for 20 years, is the safety officer at the Miller’s Ferry department.

The Red Cross has been assisting the Leazers.