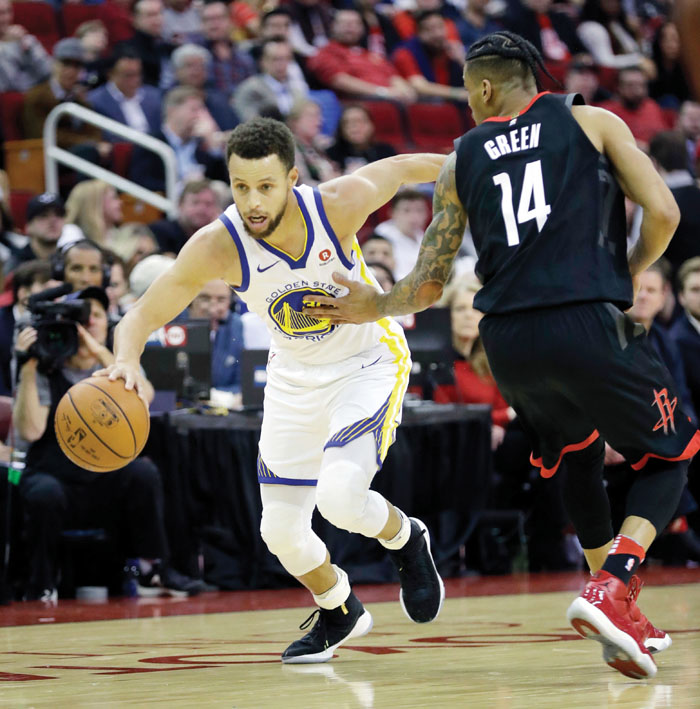 HOUSTON (AP) — Stephen Curry had 29 points, and Klay Thompson added 28 and the Golden State Warriors pulled away late in the fourth quarter for a 124-114 victory over the Houston Rockets on Thursday night.

The Warriors extended their road winning streak to nine games and have won an NBA-best 16 road games this season.

The teams stayed close through most of the game, but the Warriors had a seven-point lead with about 3 1/2 minutes left. They scored the next five points, highlighted by a 3 from Curry, to make it 120-109 and send many of the home fans streaming for the exits.

The Rockets got 30 points from Eric Gordon, and Gerald Green came off the bench to score 29 and tie a career high with eight 3-pointers as they played their second game without James Harden, who is out for at least two weeks with a hamstring strain.

The Warriors were short-handed, too, playing without Kevin Durant, who missed the game with strained right calf. But Andre Iguodala returned after sitting out Wednesday night with back and hip strains and had 10 points and eight assists.

The Warriors were up by 3 after three and opened the fourth quarter with an 8-1 run to make it 101-91 with about 10 minutes left.

Chris Paul re-entered the game after that and he helped get things going when he found Gordon for a 3-pointer which started a 7-2 run that cut the lead to 103-98. Paul finished with 28 points, nine assists and seven rebounds.

Green’s second 3-pointer in less than a minute put Houston up by two midway through the third quarter. The Warriors scored the next seven points, with a 3-pointer from Thompson, to take a 79-74 lead about a minute later.

They didn’t stay on top for long though as the Rockets scored the next 11 points to go up 85-79. Green delighted the crowd when he knocked down a 3 from the corner before being fouled Iguodala and crashing to the ground. He also made the free throw.

The Warriors ended a 2 1/2 minute scoring drought on a dunk by Kevon Looney before Curry added a layup.

But Green pushed the lead to 88-83 when he banked in another 3-pointer.

The Warriors closed out the quarter with a 10-2 spurt, capped by 3s from Nick Young and Curry, to take a 93-90 lead into the fourth quarter.

Warriors: Omri Casspi missed his second straight game with a strained back. … Curry played in his 600th career game with the Warriors, making him the 10th player in franchise history to reach that mark.

Rockets: Nene normally doesn’t play the second game of back-to-back games but was also dealing with a bruised right knee that coach Mike D’Antoni could cause him to miss more time. … Paul received a technical foul in the fourth quarter.

Rockets: At Detroit on Saturday.