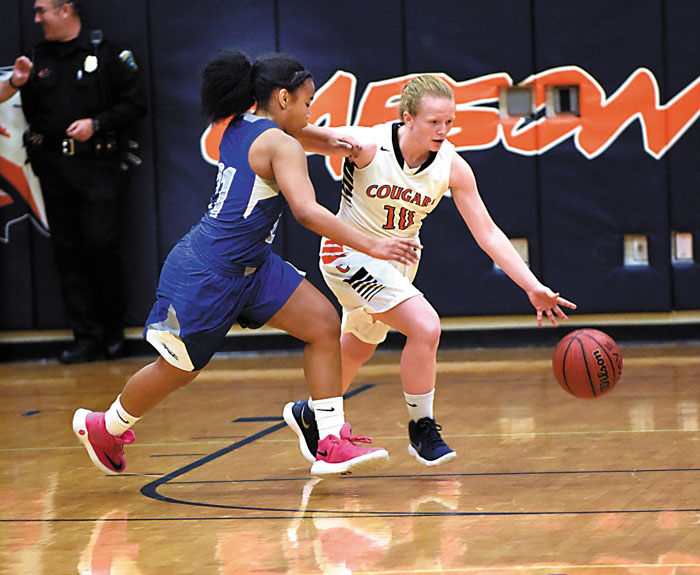 The Cougars (13-1, 1-0 NPC) had to endure their worst quarter of the season to open the game before flipping the switch and winning by a wide margin. The Greyhounds (9-5, 0-1 NPC) came out like a buzz-saw in the first period to rack up a 21-9 lead with hot shooting, rebounding dominance and a tight defense.

“That was awful,” said Cougars’ coach Brooke Stouder of the first-period performance. “That was the worst start we have had in a game all season. We haven’t given up 21 points in a quarter — that’s for sure.”

Carson, which prides itself on great defense, was victimized early by the inside scoring of Statesville’s Danasia Gray and a couple of 3-pointers by Tyaysia Sharpe. The Greyhounds got most of the offensive and defensive rebounds during the quarter and won the battles for the loose balls.

“We really jumped on them early,” said Greyhounds’ head coach Greg Stewart, “but we couldn’t weather the storm. We got into a little bit of foul trouble in the second period and that changed everything.”

The Cougars started chipping away in the second quarter behind point guard Olivia Gabriel and forward McKenzie Gadson, getting within 25-23 at the 2:08 mark of the period. Gabriel’s steal and two free throws tied it at 25-25. The rally was complete when sophomore Maci Cooper came off the bench to nail a long 3-pointer, just seconds before halftime, to put Carson ahead for good, 28-25.

“I didn’t feel any extra pressure to score,” said Gabriel, who nailed 10 of her game-high 18 points in the second quarter. “Me and McKenzie are the people our teammates look to for scoring. But I knew if I didn’t have my shot, I could dish it to my teammates. It is all about trusting each other.”

Any hopes the Greyhounds had for making a comeback of their own was quickly dispelled in the third period, as the Cougars went on an 11-2 run to take control, 39-27. Six points by center Maren Shumaker and five by freshman guard Colbie Perry led the surge.

“We wanted to keep up the intensity in the third quarter and keep doing what worked,” said Shumaker, who scored 10 points and grabbed six rebounds for the game. “I am upset we started so poorly, but I am also happy we won the game by coming back from being down.”

Carson expanded the lead to 46-30 after three quarters, then got 10 points from Gadson down the stretch, to push the margin to as many as 22.

“We were a lot more active from the second quarter on,” said Stouder. “Because we were very, very passive to open the game.  The challenge from there was to win every other quarter and I thought we responded well.”

Stouder also credited the comeback to a switch to a half-court pressure defense in the second quarter that kept the ball away from Statesville’s leading scorer Gray. The defense also produced six steals. After its big 21-point start, the Greyhounds were limited to just nine total points in the middle two quarters by the Cougars’ defense.

Carson returns to action quickly, with an afternoon tilt today at A.L. Brown High School. The non-conference makeup game begins at 1:30. A stiffer challenger awaits next Tuesday, when the Cougars travel to take on NPC power North Iredell (13-2) in Olin.