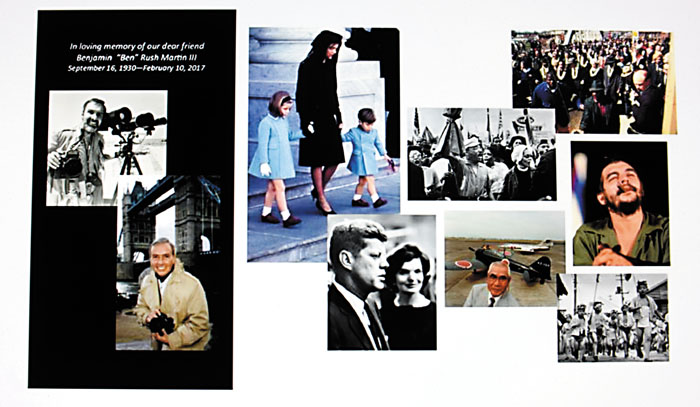 In December on Time Magazine’s “Lightbox” blog, Liz Ronk wrote a recap of the great photographers who passed away in 2017. The title of the article was “In Memoriam: Remembering the Photographers We Lost in 2017.”

She wrote, “These photographers helped shape and define nearly every area of our world, from rock music to civil rights to fine art. Here, Time celebrates the lives and work of some of the great photographers we lost in 2017.”

Among the 18 photographers listed was Ben Martin, who was from Salisbury. The blog included one of his photos of Martin Luther King Jr. and Coretta Scott King taken during the Selma civil rights march at the Pettus Bridge on March 21, 1965.

The photographers on the Time list are some of the most accomplished in their field.

It is interesting to see Ben Martin included on this list of greats. All of us living in Salisbury who have seen Martin on somewhat of a regular basis around town will find it is easy to forget or not recognize how special his work was on a worldwide level.

This is the paragraph honoring Martin on the Time blog:

Ben Martin (1930-2017):  “Ben Martin came to photography young: He received his first camera at the age of 8 and became the youngest member of the National Press Association at 17. But when he joined Time magazine it was as a copy boy, after a promised job in the photo department of Life was eliminated. Carrying a camera around with him everywhere had its advantages, however, and he quickly went from copy boy to one of the magazine’s first staff photographers, shooting alongside many of the great Life photographers. He died on Feb. 10 in Salisbury, N.C., at the age of 86.

Martin is responsible for many of the memorable images that ran in the pages of Time and Life during that era, including photographs of the 1960 presidential debate between Richard Nixon and John F. Kennedy and JFK’s funeral in 1963.

In 1965, he joined civil rights leader Dr. Martin Luther King Jr. on his march from Selma to Montgomery, Alabama. As the photographer spent much of the march walking backward, Assistant U.S. Attorney General John Doar said Martin was “the best shield Dr. King could have.”

Speaking with Time, Martin’s former wife, Kathryn Leigh Scott, fondly remembered that he always said he would never retire. In fact, he never did and continued to work right until the year before his death.

The Waterworks Gallery in Salisbury has photos by Martin on display until Feb. 3. The show is titled “A Slice of History: Commemorating the Life and Times of Ben Martin Selected Photographs.”