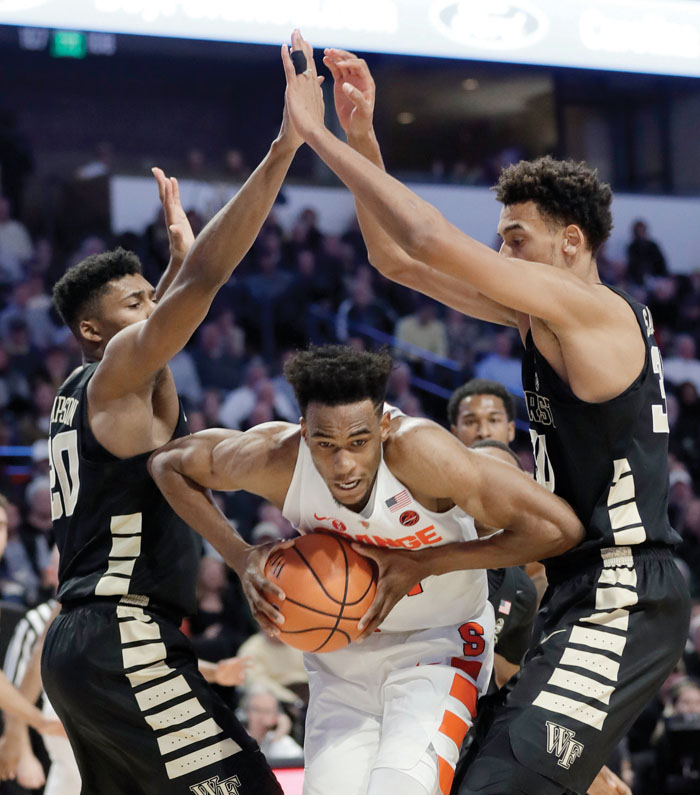 WINSTON-SALEM (AP) — Wake Forest did just enough to reverse its recent late-game struggles and hang on for its first Atlantic Coast Conference win.

Doing it with the Demon Deacons’ top scorer sidelined most of the night can only help their confidence, too.

Bryant Crawford scored 19 points to help Wake Forest beat Syracuse 73-67 on Wednesday night, hanging on down the stretch after late fades in losses to two ranked teams in the past two weeks.

“Our league is tough with no easy nights,” Wake Forest coach Danny Manning said. “And you want to hold serve at home. We were able to do that for our first home (league) game. That’s got to be our mindset from here on out.”

The Demon Deacons (8-6, 1-1) played most of the way without top scorer Keyshawn Woods, who came in averaging 15.7 points but left in the first half due to a knee injury. Still, Wake Forest managed to outrebound one of the nation’s best on the boards and came up with a couple of big late baskets to break a tie game in the final 2½ minutes.

They went ahead for good on Terrence Thompson’s scooping layup with 1:56 left, then shook off five missed free throws in the final minute of a tight game to earn their first win in six tries against the Orange (12-3, 1-1).

“I think our guys did a good job of sticking together,” senior Mitchell Wilbekin said. “It wasn’t always pretty but we got the win and we won’t apologize for that.”

Frank Howard scored 23 points to lead Syracuse, including two free throws to tie the game at 61 with 2:27 left. But the Orange had four straight empty possessions after Howard’s free throws and couldn’t get the game tied again.

“They have some good guards who made some big plays, experienced guards,” Howard said. “We didn’t contest shooters and we weren’t as active on defensive as we could’ve been and have been in the past. And we didn’t control the glass like we usually have. If we don’t do those two things, we’re going to be in trouble. That’s our identity.”

Syracuse: The Orange had a chance at their first 2-0 ACC start since the 2014-15 season and entered ranked fifth nationally in rebounding margin (plus-9.5). But Syracuse was beaten on the glass (38-29) for the first time this season while shooting just 39 percent after halftime.

“We just didn’t get some balls that were right there that you have to get,” Syracuse coach Jim Boeheim said.

Wake Forest: The late-game fades had stood out, first by surrendering a game-ending 13-0 run against Tennessee followed by a game-closing 8-0 run last weekend at North Carolina. Wake Forest hung on this time, though not until freshman Olivier Sarr went 4 for 4 at the foul line in the final 16.1 seconds to steady a finish that was threatening to turn wobbly.

Woods checked out at the 11:52 mark after a 2-for-2 shooting start. The severity of his injury and what caused it were unclear, so much so that even Manning said he wasn’t sure.

“Usually when I take him out of the game, I get some type of look that, ‘I’d like to stay out there a little bit longer,’” Manning said. “But he didn’t have that look today so I know he was hurting a little bit.”

Thompson had 13 points and seven rebounds. … Wilbekin had a career-best eight assists. … Syracuse leading scorer Tyus Battle had 13 points on 4-for-12 shooting. … Wake Forest finished with 18 points off turnovers. … Syracuse had no bench points, with Howard and Oshae Brissett each playing 40 minutes. … Wake Forest made 14 of 24 free throws (58 percent), with all but three attempts coming after halftime. … Wake Forest had assists on 20 of 25 baskets, the team’s second-best percentage (80 percent) in a game since the 1997-98 season.