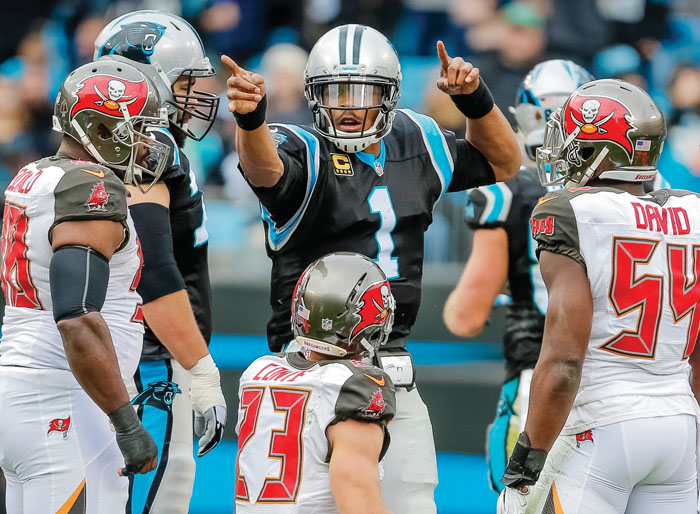 FILE - In this Sunday, Dec. 24, 2017, file photo, Carolina Panthers' Cam Newton (1) signals his first down in the middle of the Tampa Bay Buccaneers defense during the first half of an NFL football game in Charlotte, N.C. Carolina has three times run for more than 200 yards in a game this season, and that bodes well for the playoffs where the ground game is magnified. (AP Photo/Bob Leverone, File)

CHARLOTTE (AP) — When it comes to the playoffs, the Carolina Panthers have been there, done that.

The Panthers are unquestionably the most battle-tested team in the NFC playoffs with a roster consisting of players who have participated in 187 career postseason games. That’s quite a few more than the Atlanta Falcons (143), and more than double that of Carolina’s first-round opponent, the New Orleans Saints (90).

Philadelphia players have played in 74 playoff games and Minnesota’s 69, while the Los Angeles Rams are the least experienced NFC playoff team with 21.

Whether or not that experience pays off for the Panthers (11-5) remains to be seen. Carolina enters Sunday’s game at New Orleans having lost both previous regular season matchups to the Saints (11-5) by a combined 31 points.

“We’ve had guys who have been there before, so I feel like we should be ready and more prepared,” Peppers said. “I feel like guys have been around and know how to approach this thing. I think it will help us keep our poise a little bit too.”

The Panthers learned that the hard way in 2013.

They played host to the San Francisco 49ers in a divisional playoff game, but several players lost their cool — and their focus — on different occasions when calls didn’t go their way. It turned out to be a valuable lesson, as the Panthers lost the game.

“Guys were a little too excited, too rambunctious and got away from ourselves early in the game and we weren’t able to bounce back from that,” Panthers linebacker Luke Kuechly said.

Kuechly and the Panthers did a better job of managing that emotion in 2015, although there were a few hiccups in the Super Bowl loss to Denver.

Experience, he said, helps that.

Panthers coach Ron Rivera said last week’s 22-10 loss felt a little like the 2013 playoff defeat to the 49ers. The Panthers had three key calls go against them in the first half against the Falcons and never recovered. They not only wound up losing the game, but a chance to capture the NFC South division title and host a playoff game.

“One of the things I said to the guys: ‘We got a little caught up in not being happy about some of the calls that weren’t made.’ I think we got a little distracted by that,” Rivera said. “It was a little bit of a lesson (for younger players) and a little bit of refresher (for veterans), a reminder that, ‘This is playoff time. You can’t lose your focus. We’ve got to keep it on the game.’”

While the Panthers have never won a Super Bowl, this is their fourth trip to the playoffs in the last five seasons.

Panthers tight end Greg Olsen said playoff experience does matter, not only on game day but also in the preparation leading up to it.

“If you haven’t played in one, it’s really hard to anticipate it,” Olsen said. “That level of intensity keeps going up. It’s like when you first play in the preseason in the NFL and then all of sudden the regular season opener comes and it’s like, well, this is a little different. It’s kind of a similar transition to the playoffs. Every play, every move, every inch is so important. The margin for error is very small.”

Said Saints coach Sean Payton: “I think playing in big games matter. The experience of doing that, a lot of these younger players kind of played in this BCS series, it is that same type of environment. … I think it can be a factor and yet I think the preparation and the attention to detail, those type of things are most significant.”

He said just as much as experience, the playoffs after about having “smart players, players that a conscientious of the situation at hand” is equally as important.

The Panthers certainly have that in players like Peppers, Kuechly, Thomas Davis, Charles Johnson and Mike Adams on defense, as well as Newton, Olsen, Ryan Kalil and Jonathan on offense.

NOTES: Panthers running back Jonathan Stewart (back stiffness) and guard Trai Turner practiced for the second straight day, although Turner remains in the concussion protocol. But starting left tackle Matt Kalil did not practice because of an illness.