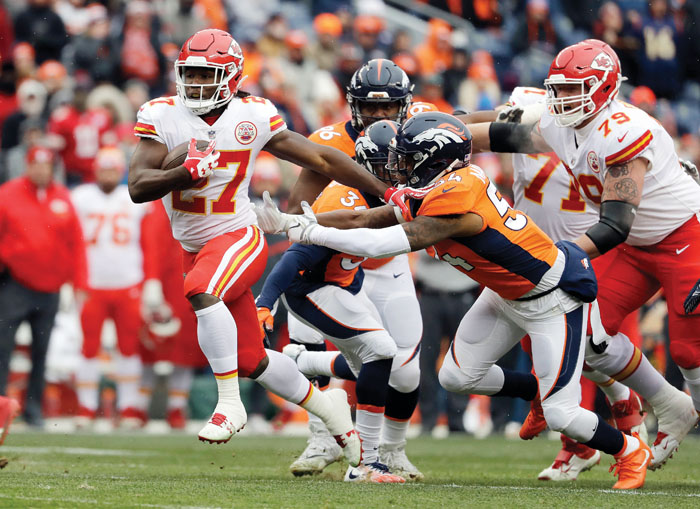 AP Photo/Jack Dempsey Kansas City Chiefs running back Kareem Hunt (27) runs for a touchdown past Denver Broncos inside linebacker Brandon Marshall during the first half of last Sunday’s game in Denver. The 35-yard run clinched the league rushing title for Hunt with 1,327 yards.

KANSAS CITY, Mo. (AP) — Kareem Hunt has been running through challenges all season.

First, there was the challenge of taking over the starting job in Kansas City when veteran running back Spencer Ware, who was supposed to form a two-headed monster with him, went down with a season-ending injury during a preseason game against Seattle.

Then there was the challenge of living up to expectations, which soared after Hunt ran roughshod over New England in the season opener and kept climbing after a string of incredible performances.

There was the inevitable challenge of breaking through the rookie wall, too. Hunt struggled along with the rest of the Chiefs during a midseason swoon that saw them lose six out of seven, putting their once-iron grip on the AFC West in jeopardy with a few games left in the regular season.

The next challenge: The Titans’ bruising rush defense, now that Hunt has led the Chiefs to their second straight division title and into a wild-card game on Saturday at Arrowhead Stadium.

“I always believe in myself. I always think I’m going to make something happen,” said Hunt, a third-round pick out of Toledo. “When Ware went down, I had an opportunity to step in and fill a role.”

He filled that role in record-setting fashion, too.

Hunt successfully persuaded coach Andy Reid to let him play last week against the Broncos, even though the division had been decided and playoff position set, so that he could take aim at the league rushing title.

Hunt only needed one carry to scamper 35 yards for an early touchdown, enough yardage to send him past the Rams’ Todd Gurley with 1,327 yards in just over 15 games.

Hunt is the second straight rookie to win the rushing title, following the Cowboys’ Zeke Elliott, and the sixth to accomplish the feat in the Super Bowl era.

The only other Chiefs to lead the league in rushing are Priest Holmes and Christian Okoye.

All of that seemed possible when Hunt eclipsed 100 yards rushing in four of his first five games, including a 172-yard performance against the Chargers.

THOUSAND OAKS, Calif. (AP) — The Los Angeles Rams haven’t been to the playoffs in 13 years. Their roster has only six players with NFL postseason experience, and they’re led by the youngest head coach ever to earn a playoff berth.

They’ve also got Wade Phillips, who has done, seen and counter-schemed just about everything that can be accomplished on a football field during 40 NFL seasons with 10 teams.

“He’s a guy that you love having on your side when you’re going into any situation,” said Sean McVay, the Rams’ 31-year-old head coach.

The Rams’ 70-year-old defensive coordinator in the NFL postseason for the 20th time after putting together yet another solid defense in his first season with a new team. Phillips has been a head coach, a defensive mastermind and a steady mentor to generations of football talent during an all-encompassing career, and he shows zero signs of slowing down.

When the Rams (11-5) face the Atlanta Falcons (10-6) on Saturday night at the Coliseum, Phillips will be going after his second championship in three seasons after winning his first Super Bowl with Denver just two years ago. That title was a long-awaited reward for decades of hard work, but Phillips is visibly energized by the chance to contend for another ring with the NFC’s No. 3 seed.

For the eighth straight time since 1989, Phillips has accepted a new job and immediately taken a team to the playoffs in his first season.

The quarterback brushed aside a safety with a stiff-arm on his way to a big run.

When Mariota is running, the Titans are usually all smiles because their offense shows signs of life.

Mariota ran a career-high 10 times for a season-high 60 yards to help the Titans earn their first playoff berth since 2008. Better yet, teammates saw a swagger in Mariota as he got off the ground and stared down a defender to make them confident their quarterback is feeling good, possibly even as he did before a broken right leg ended his 2016 season a game early.

“That’s old Marcus, before the injury,” Pro Bowl defensive lineman Jurrell Casey. “That’s him. This is the Marcus I been waiting to see — him using them legs and making things happen. We need to see that more out of him going forward.”

“We’re at that point right now when every man needs to do whatever he can, whatever it takes, to make this thing go,” Mularkey said. “It was good to see what he did the other night. Obviously, it helped us win the football game. I think it helped him gain a little confidence too that he can do more.”

An NFL quarterback needing a confidence boost sounds unusual, but Mariota’s third season with the Titans has easily been his worst statistically with a career-low 13 touchdowns and 15 interceptions. Mariota has a career-high five TDs rushing, but the quarterback who missed six quarters in October with a strained left hamstring had his lowest average per carry yet at 5.2 yards per attempt.

The Titans dropped from third in the NFL in rushing last season to 15th this season.

MORE OF THE SAME: BENGALS STICK WITH MARVIN LEWIS

CINCINNATI (AP) — The assistant head coach is gone, but head coach Marvin Lewis is coming back for a 16th try at a playoff victory.

And so it goes in Cincinnati.

In a what-have-you-done-lately league, the Bengals remain the outlier. Lewis met with the media on Wednesday, a day after getting a two-year extension through 2019, and talked in general terms about how his team needs to change.

All the things he’s said many times during the second-longest active coaching tenure in the NFL, behind only Bill Belichick. Unlike the New England coach, who has five Super Bowl titles, Lewis has yet to win a playoff game.

But owner Mike Brown hates change and was willing to give Lewis yet another chance after yet another futile season.

The 82-year-old owner didn’t attend the news conference — he rarely addresses the media — so it was left to Lewis to explain why he was still there.

“Everybody can always look at what’s negative from it, but the only way we can go about it and do it positive is to get back to work and go about it.”

One change: Lewis wanted more control over the coaching staff and evidently got it. Paul Alexander, the assistant head coach and offensive line coach for 23 seasons, was let go.

ALAMEDA, Calif. (AP) — Jon Gruden says he had a good talk with Oakland Raiders owner Mark Davis about returning to the organization for a second stint as coach and believes there is a “good chance” it will happen.

Gruden gave an interview to ESPN Radio on Wednesday to discuss his pursuit of the Raiders job that opened when Jack Del Rio was fired after a disappointing six-win season.

“It’s been a long couple of weeks,” Gruden said. “I know they’ve gone through their process of interviewing candidates and until they’re done I won’t know. I did have a good meeting with Mark. I’ve known him a long time and got a lot of respect for the Raiders football organization.”

Gruden has been out of coaching the past nine years while serving as ESPN’s analyst for “Monday Night Football.” He is scheduled to work the network’s playoff game Saturday in Kansas City between the Chiefs and Tennessee Titans and could come back to the Raiders as soon as next week.

“I think there’s a good chance,” he said. “I’m excited about where I’m at in terms of studying the game and preparing to come back and coach. I just don’t want to sit here and speculate.”

Gruden apparently is already trying to put together a staff. Bengals coach Marvin Lewis said he expected defensive coordinator Paul Guenther to interview with Oakland “at some point.”

His tenure ended shortly after the “Tuck Rule” loss to the New England Patriots when he was traded the following month to Tampa Bay for two first-round draft picks, two second-rounders and $8 million.

The Raiders will be required to comply with the “Rooney Rule” and interview at least one minority candidate or otherwise face discipline from the NFL. The team has not commented on the search and might have already conducted that interview.

Gruden dismissed speculation raised in a report by ESPN over the weekend that he would get an ownership stake as part of his contract.

This would not mark the first time the Raiders brought back a coach for a second stint. Late owner Al Davis hired Art Shell in 2006, 11 years after firing him the first time. Shell went 2-14 that season and was fired after one year.

Other teams have also done it, with one of the most recent notable ones being Joe Gibbs in Washington. Gibbs stepped away following the 1992 season with three Super Bowl titles in his career. He came back in 2004 and had a 30-34 record in four seasons, leading Washington to two playoff berths.