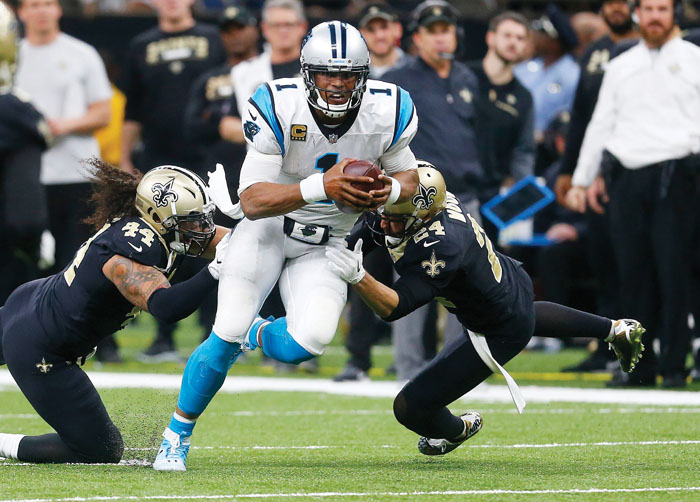 FILE - In this Sunday, Dec. 3, 2017 file photo, Carolina Panthers quarterback Cam Newton (1) tries to avoid the tackle by New Orleans Saints outside linebacker Hau'oli Kikaha (44) and cornerback Sterling Moore (24) in the second half of an NFL football game in New Orleans. Cam Newton knows the Panthers will be walking into a pressure-packed environment Sunday, Jan. 7, 2018 when they face the New Orleans Saints at the Superdome in an NFC wild card game. (AP Photo/Butch Dill, File)

But so far the Panthers seventh-year quarterback has been mediocre in the postseason, something he hopes to improve upon when the Panthers visit the Saints on Sunday in the NFC playoffs.

Newton is 3-3 all-time in the postseason, with his last playoff game culminating in an emotionally devastating 24-10 loss to the Denver Broncos in Super Bowl 50.

Outside of a riveting performance in a 49-15 win over the Arizona Cardinals in the 2015 NFC championship game, Newton’s statistics in the postseason have been average. He has completed just 59.7 percent of his passes for eight touchdowns and seven interceptions. He’s run for only two TDs, both of those coming in the playoff rout of the Cardinals.

“This is when the real football starts,” Newton said after Wednesday’s practice. “This is where you’re made or you’re broke — and I look forward to these moments because it brings out the best in the individual because there is so much pressure. And we all know pressure does one of two things. We’re hoping to shine like diamonds on Sunday.”

But that doesn’t bother the NFL’s 2015 league MVP, who is expecting to bounce back from the worst statistical game of his game of his career in a 22-10 loss last Sunday at Atlanta.

His quarterback rating of 31.5 in a 22-10 loss to the Falcons was the worst of his 109 career starts. He misfired on his first nine passes and had three second half interceptions. Yet he believes the problems in that game are easily fixable and the Panthers can rebound and rediscover the mojo that helped them win seven of eight games before the Falcons fiasco.

“It just wasn’t clicking,” Newton said. “And it was internal. So self-inflicted things and that’s never good for you. … Protecting the football is important and I have to do a way better job of doing that.”

This isn’t first time the Panthers have battled adversity, which isn’t lost on the former Heisman Trophy winner who won a national championship at Auburn.

Even Panthers coach Ron Rivera referred to this as a “tumultuous” season.

The Panthers endured the off-field distractions from get go with the firing of general manager Dave Gettleman on the eve of training camp. That was followed by the midseason trade of No. 1 wide receiver Kelvin Benjamin, the negative feedback from Newton’s sexist comments to a female reporter and the alleged sexual and racial misconduct surrounding team owner Jerry Richardson, who now plans to sell the team.

And that doesn’t even include the injuries which kept three-time Pro Bowl tight Greg Olsen and two-time All-Pro center Ryan Kalil out of most of the season.

Newton said the Panthers have learned to “weather the storm,” which has brought them closer together as a team.

Carolina’s wide receiving corps remains a muddled mess and the Panthers still don’t appear to have a defined role for rookie running back Christian McCaffrey. But Olsen will play against the Saints for the first time this year giving Newton more options, and running back Jonathan Stewart (back stiffness) and guard Trai Turner (concussion) are expected back from injuries this week.

But the reality is the Panthers will only go as far as Newton can take them in the postseason.

Not only is he the Panthers’ leading passer, he’s also their leading rusher.

“We’ve got to keep Cam from trying to run all over the field, try to make him be more of a pocket passer,” said Saints defensive tackle Tyeler Davison.

Saints defensive lineman Sheldon Rankins said the Saints have been able to throw Newton off the last two games by disguising coverages and giving him multiple looks. Newton has two TD passes and three interceptions in two games against the Saints which the Panthers have lost by a combined margin of 65-34.

“Not allowing him to get a bead on where the coverage is rolling down to, who’s coming, who’s not, different stunts up front,” Rankins said. “If you can always keep Cam on his toes, it definitely gives you the best chance to win.”

“He’s a guy that tends to bounce back after a tough outing,” Rivera said. “We had a tough outing. He’s going to prepare, be ready. We, as a football team, will prepare and be ready.”