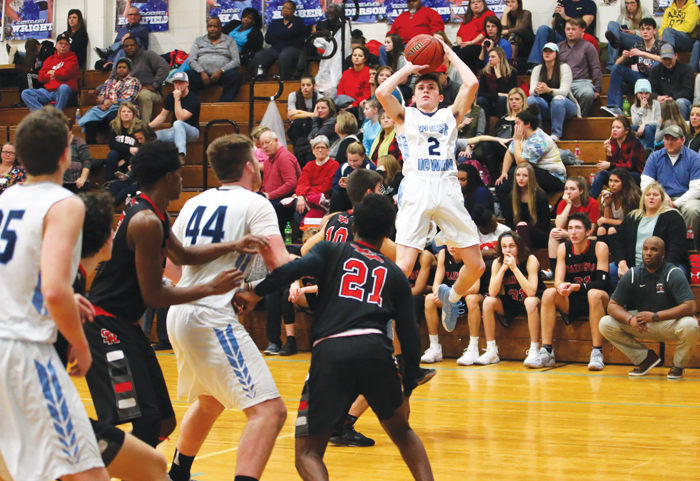 But the Falcons are heading there with a two-game winning streak following Wednesday’s 52-43 non-league victory against visiting South Rowan.

“I don’t mean to go into my Bob Huggins repertoire,” winning coach Mike Gurley said, “but if we’re not ready, we’ve still got to play them. I think we’re headed in the right direction.”

At least West’s defense is. The Falcons are 6-7 overall, largely because they limited South (4-9) to 17 points and five baskets in the second half.

“Well, our offense didn’t come up big in the second half,” South coach Andre McCain said, after the Raiders lost their fifth straight game. “Our shots didn’t fall and we didn’t stay aggressive. Once they got up on us, we had to come out of our zone, and that hurt our game plan.”

So did Caleb Mauldin, West’s 6-foot-8 forward. The senior was a presence at both ends of the floor — snagging rebounds, swatting away shots and scoring a game-high 24 points. He was front-and-center during a 15-2 scoring spree, when the Falcons turned a 31-26 third-quarter deficit into a 41-33 lead. Mauldin netted 15 second-half points, nine during the decisive spurt, and drained a 3-pointer from the beyond the top of the key with 3:11 remaining in the third period.

“That’s part of his arsenal,” Gurley said. “He hit five against Cox Mill two years ago. I don’t mind him shooting it — but if you’re gonna shoot a second or third one, one of the first two better go in. But that whole streak got started when Payne (Stolsworth) took two or three good misses — and those shots were rebounded by Caleb for easy baskets.”

“We respect Bailey Graham so much that we wanted to give him attention,” Gurley said. “And we really took that guy out of any of the team man-to-man defense. Bailey went off on us last year in China Grove, so we tried to neutralize him. It was mainly Josiah Dixon and Jay Joseph who did that.”

South’s only fourth-quarter field goals were recorded by ex-West product Zach Powers and Graham — who rifled in a 3-ball with 1:20 to play.

“We’ve got to play for 32 minutes, not 16,” McCain lamented afterward. “You can’t win any ballgame playing half the game.”

South remains 4-3 in Central Carolina Conference play and visits Salisbury on Friday. “This wasn’t the middle (portion) of the season we were hoping for, but we’re still fine in our conference,” McCain said. “We’re still OK.”

NOTES: Gurley is closing in on a couple of milestones. The win was his 499th as a varsity head coach and his 397th at West Rowan.