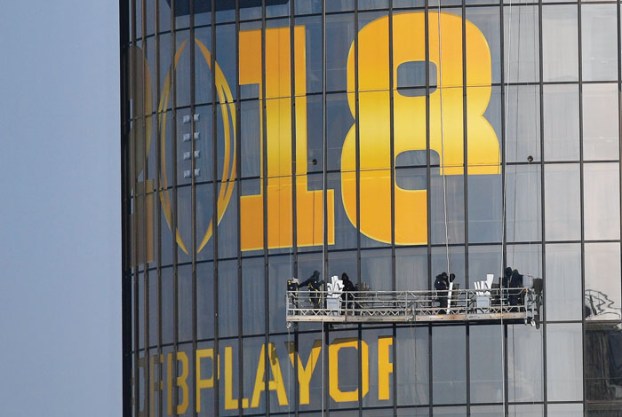 Legit gripes? Maybe, but no change to college playoff format

ATLANTA (AP) — Unlike the Bowl Championship Series, the College Football Playoff was built to withstand criticism instead of shifting to respond to yearly griping.

That structure is standing strong despite some blowback.

Two Southeastern Conference teams playing for the championship on Monday night in Atlanta? Not a problem. Two Power Five conferences left out of the final four, including Big Ten champ and bluest of blue bloods Ohio State? That’s OK. Undefeated UCF never getting serious consideration for spot in the playoff? Congratulations on a great season, but that’s just the way it goes, Knights.

Despite this storm, the playoff is what it is for the foreseeable future. No one in position to fight for changes has given any indication tweaks are coming. Especially not expansion.

“The CFP was built on a more long-term foundation than the BCS was,” College Football Playoff executive director Bill Hancock said Wednesday.

The playoff management committee is made up of the FBS conference commissioners and Notre Dame’s athletic director, but the architects were mostly the commissioners of the Power Five conferences. Final approval was given by a panel of university presidents representing each conference. The system was locked into place with a 12-year television contract with ESPN. This is year four of that agreement.

“The BCS contracts were four years,” Hancock said. “After two years of every agreement it was time to begin thinking about the next agreement.”

The reality is if the commissioners wanted to expand, ESPN would not stop them, but the contract showed a commitment to the CFP that was often lacking in the BCS. Frequently with the BCS, debates about which teams did or did not make the championship game or the other BCS bowls led to changes to the selection process.

Good intentions, but not good optics.

Hancock said when reacting to complaints the goal was to make the BCS better, but “in hindsight that was not the best approach because it contributed to the public not understanding how it worked or the perceived mystery about it. And also led people to believe that the people who owned and operated it weren’t really confident about it.”

A month ago, on selection Sunday, after Georgia and Alabama (which did not even play in the SEC title game), were chosen by the selection committee to play in the semifinals, Big Ten Commissioner Jim Delany expressed full confidence in the playoff and the committee. Pac-12 Commissioner Larry Scott, whose conference was also left out, said he believed there was no reason to begin talking about expansion.

Auburn beat both Georgia and Alabama in the regular season.

“At this point I still don’t favor expansion,” Aresco said. “I do think our teams need to get a better shake, but that’s a separate issue.”

White said he does not question the selection committee’s integrity, but he does believe it has a bias against teams from outside the Power Five. UCF was never ranked higher than No. 12 in the selection committee’s rankings. White wants a return to the BCS selection process, which used a combination of media and coaches’ polls and computer ratings. The BCS rankings were usually kinder to teams from outside what at the time was six automatic qualifying conferences.

“You look at a Utah and a TCU and Hawaii. Boise. They had years like we had they were somewhere near the top five. And we’re 12th,” White said. “I just think that’s a disservice. Because it doesn’t solve the second part that I think needs to change and that’s I think the playoff needs to be at least eight teams if we’re going to call it a true national champion, because it’s not inclusive enough.”

And since White does not believe the playoff crowns a true champion, UCF has declared itself national champs . UCF football’s official Twitter account has the title 2017 National Champions. School officials plan to hang a championship banner and have a parade in nearby Disney World for the team. White even said he planned to pay former coach Scott Frost, who is now coach at Nebraska, and his staff their championship bonuses.

“I look at schools all across the country that are hanging national championship banners for years they had that weren’t even close to the year we just had,” White said.

For now, though, White’s calls for change to the CFP are just shouts into an empty room. He speaks for many fans, but no one is listening.

KANSAS CITY, Mo. (AP) — Kareem Hunt has been running through challenges all season. First, there was the challenge of... read more