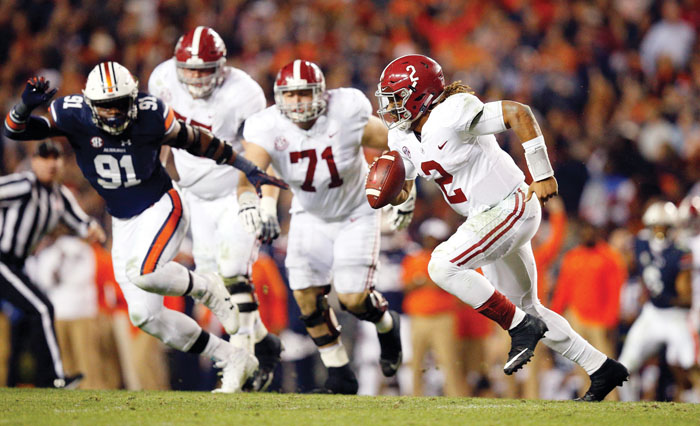 FILE - In this Nov. 25, 2017, file photo, Alabama quarterback Jalen Hurts runs the ball during the second half of the Iron Bowl NCAA college football game Auburn in Auburn, Ala. Hurts gives Alabama a dual-threat and especially powerful runner. He was second on the team with 945 yards rushing and eight rushing touchdowns. (AP Photo/Brynn Anderson, File)

ATLANTA (AP) — Alabama and Georgia should know a lot about each other when they meet in the College Football Playoff national championship game Monday night, even though the teams have not played in a few years.

With Nick Saban on one side and his former defensive coordinator, Kirby Smart, leading the Bulldogs, the teams competing in the national championship game have a lot in common, especially the way they play defense, using a 3-4 scheme that often looks like a 4-3 with outside linebackers providing pass rush like defensive ends. Tight coverage on outside receivers and a mix of well-disguised blitzes can be hard to decipher for a quarterback.

Some of the matchups that could decide the national title.

A case can be made that Smith has been the best defensive player in the country this season. He is an instinctive linebacker and Georgia will move him around in the tackle box to free him to run to the ball. Even in a wild Rose Bowl with more than 1,000 yards of offense, the All-American Smith was a force against Oklahoma, making several pivotal third-down stops.

“He doesn’t miss many tackles,” said Appalachian State coach Scott Satterfield, whose team lost to the Bulldogs to open the 20017 season.

Satterfield said Georgia’s length on the edges with outside linebackers Davin Bellamy (6-foot-5) and Lorenzo Carter (6-6) makes it difficult to attack the edges against the Bulldogs.

Hurts gives Alabama a dual-threat and especially powerful runner. He was second on the team with 945 yards rushing and eight rushing touchdowns. If Georgia needs someone to spy Hurts, it could be Smith.

“Don’t be in a hurry to get a sack, more than making sure you’re maintaining rush lanes and force him to be a pocket guy with the pocket collapsing around him,” Florida coach Dan Mullen said.

This is a different kind of matchup than Hurts-Smith, because Fromm is not a running threat. The challenge for the freshman quarterback will be identifying where Fitzpatrick is lined up from play to play because Alabama uses the All-American everywhere: safety, cornerback and linebacker. He is even used as an edge rusher. Defensive coordinator Jeremy Pruitt does not call a lot of blitzes, but when he does Fitzpatrick is often the guy Alabama brings. Or he can show blitz with Fitzpatrick and have him back out and seamlessly drop into coverage.

Fromm has shown the poise of a veteran all season, but Saban’s defenses have been known to fluster even experienced quarterbacks and Fitzpatrick is an extension of Saban on the field.

When Payne is not catching touchdown passes he is one of the best interior linemen in college football. At 308-pounds, he is hard to move and can overpower blockers. He is a big part of the No. 1 run defense in the country. Alabama allows only 2.7 yards per carry. Georgia averages 5.99 yards per rush, sixth best in the country, behind tailbacks Nick Chubb and Sony Michel.

“That’s their offense. It is stopping those guys and then you just got to be sound,” Mullen said. “If you make mistakes and let other people score on you, let other people make big plays against you, that’s where it gets really hard to beat them.”

Gaillard is a 301-pound fourth-year junior who gives Georgia a chance to move Payne one-on-one, but he will probably need some help from guards Kendall Baker and Ben Cleveland. Auburn and Mississippi State had some success running against the Tide, but that was with the threat of a running quarterback and offenses that use motions and run-pass option plays to get linebackers and safeties out of position. Georgia uses lots of formations and some motion, but with no quarterback running threat, the Bulldogs are going to need to move big bodies like Payne and Raekwon Davis (307 7pounds) out of the way to get Chubb and Michel going.

“If Georgia can be able to stick with the run, get patient with the 2- and 3-yard gains and find a way to convert on third down, Michel and Chubb will hit some big ones,” Mullen said.

Alabama leans heavily on Ridley in the passing game. The junior has 59 catches for 935 yards to lead the Tide.  No other receiver has more than 16 receptions of 244 yards. There is talent elsewhere in the Crimson Tide passing game. The second- and third-leading receivers by yardage are freshmen Jerry Jeudy and Henry Ruggs III. Robert Foster is a senior whose career has been stunted by injuries. But Ridley is the man.

“We rolled the coverage to Ridley a couple of times and he was still able to win,” Mullen said.

“If they do have a weakness, relatively, it’s in the secondary,” Appalachian State’s Satterfield said of Georgia’s defense.

Expect Baker to spend a lot of time shadowing Ridley and for safeties Dominick Sanders and J.R. Reed to provide support.