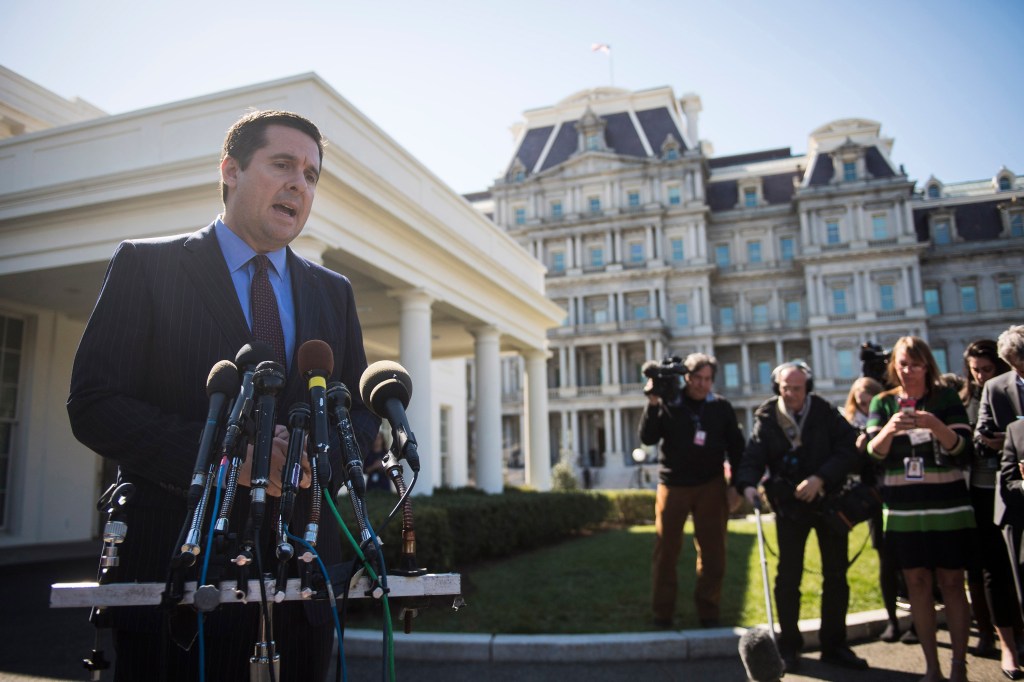 House Intelligence Committee chairman Devin Nunes has issued a subpoena to David Kramer, a former State Department official who, in late November 2016, traveled to London to receive a briefing and a copy of the Trump dossier from its author, former British spy Christopher Steele. Kramer then returned to the U.S. to give the document to Sen. John McCain.

Kramer is a senior fellow at the McCain Institute for International Leadership at Arizona State University.

McCain, recovering in Arizona from treatments for cancer, has long refused to detail his actions regarding the dossier. For his part, Kramer was interviewed by the House Intelligence Committee on Dec. 19. The new subpoena stems from statements Kramer made in that interview.

In the session, Kramer told House investigators that he knew the identities of the Russian sources for the allegations in Steele’s dossier. But when investigators pressed Kramer to reveal those names, he declined to do so.

Now, he is under subpoena. The subpoena, issued on Dec. 27, directs Kramer to appear again before House investigators on Jan. 11.

Beyond that, there is another reason to know Steele’s sources, and that is to learn not just the origin of the dossier but its place in the larger Trump-Russia affair. There is a growing belief among some congressional investigators that the Russians who provided information to Steele were using Steele to disrupt the American election as much as the Russians who distributed hacked Democratic Party emails. In some investigators’ views, they are the two sides of the Trump-Russia project, both aimed at sowing chaos and discord in the American political system.

Meanwhile, in a Fox News interview on Dec. 29, Sen. Lindsey Graham strongly suggested there is something untoward in the dossier material. Noting that special counsel Robert Mueller is not investigating the dossier, Graham said he, Graham, has finally gotten a look at the origins and use of the document:

“I’ve spent some time in the last couple of days, after a lot of fighting with the Department of Justice, to get the background on the dossier, and here’s what I can tell your viewers: I’m very disturbed about what the Department of Justice did with this dossier, and we need a special counsel to look into that, because that’s not in Mueller’s charter. And what I saw, and what I’ve gathered in the last couple of days, bothers me a lot, and I’d like somebody outside DOJ to look into how this dossier was handled and what they did with it.”

Host Brian Kilmeade asked Graham whether he was disturbed by the contents of the dossier or how the Justice Department used it in the Trump-Russia investigation. Graham continued:

“And the one thing I can say, every prosecutor has a duty to the court to disclose things that are relevant to the request. So any time a document is used to go to court, for legal reasons, I think the Department of Justice owes it to the court to be up-and-up about exactly what this document is about, who paid for it, who’s involved, what their motives might be. And I can just say this: After having looked at the history of the dossier, and how it was used by the Department of Justice, I’m really very concerned, and this cannot be the new normal.”

What, precisely, did Graham mean? A well-informed source would not explain beyond Graham’s words, and a Justice Department source did not respond to a request for comment.

But by discussing when “a document is used to go to court,” Graham seemed to refer to the dossier and the U.S. Foreign Intelligence Surveillance Court. And he seemed to suggest that, if the FBI used revelations from the dossier to secure a warrant to spy on Americans, it was not fully transparent about the source of those revelations, which was an opposition-research project funded by the Hillary Clinton campaign. FBI and Justice Department officials have told Congress they have not been able to verify the dossier’s substantive allegations of collusion between Russia and the Trump campaign.

Further, Graham found the dossier affair serious enough to warrant an entirely new investigation, as he does not appear to trust the Justice Department to investigate itself on this particular issue.

But there has been serious resistance to the idea of another special counsel in the Trump-Russia matter. Such investigations are inevitably subject to mission creep and can go on seemingly forever. It’s unclear whether anything would be done in response to Graham’s call.

In any event, the efforts pushed by Nunes and the Senate show that Congress, if it is aggressive, can investigate a matter like this. They also indicate that, rather than going away, the dossier investigation will only intensify in the new year.