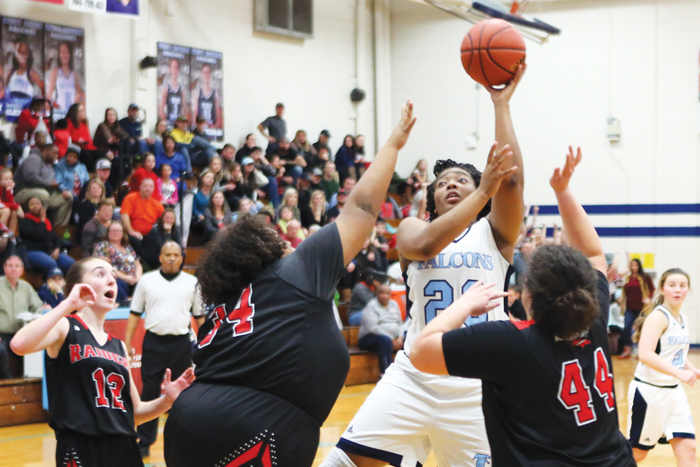 “I thought we played defense well and rotated well,” Poole said after West (10-3) put the skids on a two-game losing streak. “We needed to find something positive going into conference. It was good to get a win.”

They got it because their defense limited South (8-5) to six field goals in the first half. And because sophomore Abigail Wilson scored 12 of her game-high 24 points in the fourth quarter. And finally, because the Falcons converted 10-of-11 free throws in the last 3:42 — silencing the Raiders, who rallied from a 10-point halftime deficit and tied the score midway through the final period.

But the reason that couldn’t be overlooked was injuries to three of South’s five starters. The Raiders suffered four hard-to-swallow losses on the same day, beginning with senior guard Brooke Lowery, who suffered a stress fracture and arrived with a boot on her left foot. She’ll likely be sidelined three weeks.

“At 2:20 this afternoon, we found out Brooke couldn’t play,” said coach John Davis. “She said she just started having pain in it (Tuesday) night, went to the doctor and it’s a stress fracture.”

Sophomore Madison McGuire made her first varsity start in Lowery’s place. Next came a strained calf injury to Tazah Hardin, forcing her to miss most of the second quarter and all of the second half. She was walking with great difficulty after the game.

The second half was less than two minutes old when junior Janiya Downs — the county’s second-leading scorer this winter and last season’s Rowan County Player of the Year — landed hard on her backside while driving toward the basket. She missed the rest of the game and her status is day-to-day, according to Davis, who called Downs’ injury “a bruised tailbone.”

“We lost a good punch of our scoring tonight,” Davis said, outside the somber South locker room. “But I thought Riley Corriher rose to the occasion and played her (butt) off out there. She was in there battling the big girls in the block. I’m not sure how many rebounds she had, but (she) played scrappy.”

Corriher — a 5-foot-6 senior guard — scored a career-high 23 points, 15 in the second half while working inside against West’s 5-10 Abigail Wilson and Egypt Alexander. Her 3-pointer from the left side with 3:55 remaining knotted the score 40-40.

“As a senior, in that situation, I knew I had to step up,” Corriher said. “That’s the first time I ever played post on defense. We had to hustle back and play transition on offense, using adrenaline to stay in the game. I think it says we were ready to play.”

In the end, Wilson was simply too assertive with and without the ball. Her three-point play with 3:42 to go put the Falcons ahead for good and initiated a strong finish from the foul line. Only 1:45 remained when Wilson took a fast-break feed from Alexander and hit a layup to make it 51-43.

“In the third quarter, I’d look inside and pass out to the guards,” Wilson said. “In the fourth, I started doing what the coaches told me to do — drive to the basket.”

Both teams face uncertain futures beginning Friday, when the beat-up Raiders visit Salisbury in a Central Carolina Conference contest and West — which still seems out of rhythm — launches its North Piedmont Conference season at North Iredell.

“I just think we started slow and weren’t playing our game,” Wilson concluded. “It’s a win and we needed it, but it was an ugly game. Not one of our best.”