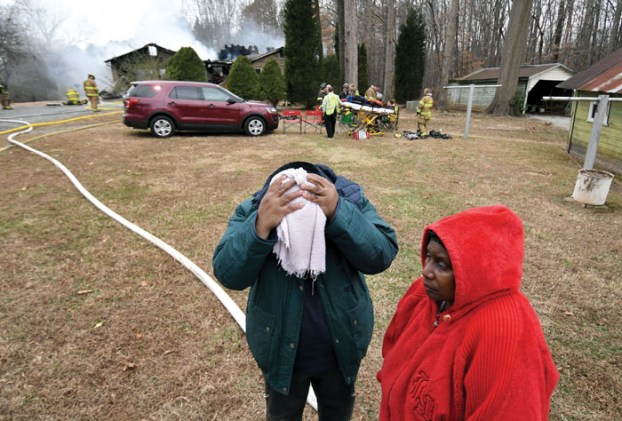 Roy Leazer wipes his head with a towel as he stands with his wife Chi chi in a yard near his Robinson Road home. The couple's home of was destroyed by fire on Wednesday afternoon. Jon C. Lakey/Salisbury Post

EAST SPENCER — Roy and Chi Chi Leazer lost all their belongings in a house fire Wednesday afternoon. But the couple, who’ve been married for 26 years, were grateful that they and their dogs made it out safely.

Chi Chi Leazer stood arm-in-arm next to her husband, who’d placed a wet cloth on his head after he singed his hair trying to escape the fire.

The couple fled their home in nothing more than lounge wear — she in bedroom shoes and he in flip-flops. The temperature hovered around 20 degrees at the time.

“We lost everything but each other,” Chi Chi said.

The Leazers have lived at the home at the top of a small hill at 418 Robinson Road since 2000. They watched as flames took what was left of the brick exterior.

The fire began in the garage, located at one end of the home. Flames soon reached the other part of the house where the couple were working in their home office.

“We heard something fall like on the roof,” Chi Chi said.

They went outdoors thinking a tree had fallen on the house but were shocked to discover flames traveling throughout the home. What they’d actually heard was the roof caving in around them.

Roy ran to see if he could get the cars out of the garage, but the flames were too much as they crept up the wall and into the rest of the house.

He ran to safety when he heard an explosion. He burned the top part of his head and dislocated a finger while running away from the flames.

“We ran for our lives,” Chi Chi said.

Roy said he believes the explosion was a propane tank they had for a planned barbecue. He said he thought perhaps one of the tanks they had was leaking.

The couple’s two dogs — a shih tzu named Lady, a rescue dog, and Coco, a pug and rat terrier mix — made it out. However, for a while the Leazers didn’t know where Coco was until a rescue squad member asked if their dog was a brown pug.

Chi Chi didn’t hesitate for a second before asking where he’d seen the dog. Several minutes later, Chi Chi, wrapped in a Red Cross blanket, was reunited with Coco. The dog was found on the other side of Royal Giants Park and lured to a warm, waiting car with food.

No cause for the fire had been determined just a few hours after it broke out at 1 p.m. But East Spencer Fire Chief Shawn McBride confirmed that the worst damage was in the garage.

Firefighters were still putting out hot spots over two hours after initially arriving to the scene. McBride said when firefighters arrived, the garage was engulfed.

They needed more water than a nearby fire hydrant could provide and called in other fire departments with tankers to haul water.

The Red Cross is assisting the Leazers.

SALISBURY — According to a recent YouGov poll, the most popular New Year’s resolutions for 2018 are those we’ve heard before.... read more