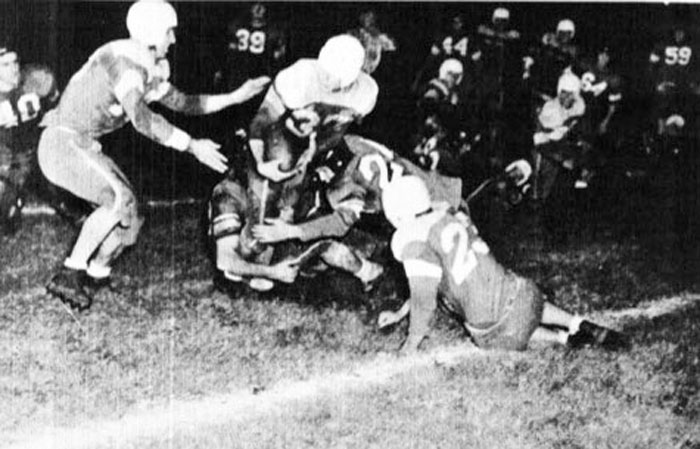 The Herd Insider A Marshall ball carrier is tackled by two Catawba players during the 1948 Tangerine Bowl. Catawba won the game, 7-0, and was 11-1 on the season, winning 10 games by shutout.

SALISBURY — Norman “Wildman” Willey earned his nickname as an NFL rookie when he was trying desperately to make the team in camp and repeatedly crushed Philadelphia Eagles quarterback Tommy Thompson.

Coach Greasy Neale had shifted the 6-foot-2, 225-pound Willey from fullback, where he tried out first, to defensive end, and he struck gold with that move. “Someone block that wildman!” the beleaguered Thompson screamed. The name stuck.

During his eight seasons with the Eagles, Willey made two Pro Bowls. There was a game at the Polo Grounds on Oct. 26, 1952, in which Willey sacked New York Giants quarterbacks Charlie Conerly and Fred Benners (who replaced the battered and bloodied Conerly)  an incredible 17 times.

Sacks weren’t an official NFL stat at that time, but they did keep track of “passing yards lost,” and the Giants officially had minus-127.

Willey, who died in 2011, never had any doubts that he registered 17 sacks because after film study the Monday following the game, a coach handed him $170 — the Eagles’ standard $10 bonus for each savage hit on the quarterback. The NFL frowned on monetary incentives for hurting opponents, but teams paid them anyway. Willey needed the extra loot. His largest annual NFL salary was $9,000.

Seventy years ago, on New Year’s Day, 1948, Catawba College was fortunate enough to dodge the “Wildman” and won the Tangerine Bowl against Marshall in Orlando, Fla., 7-0. It’s still arguably the greatest victory in school history.

While Willey turned 20 shortly before his 1947 college season with the Thundering Herd, some Catawba players who carved out a legendary 11-1 record (with nine shutouts) for coach Gordon Ashby Kirkland, were considerably older. Many had served in World War II before returning to Catawba to finish their degrees. Catawba tackle Martin Luther Barnes was 25 years old and had a less colorful nickname  than “Wildman” — M.L. — but he already had fought with the U.S. Marines in the Pacific. He’d survived Japanese  bullets at Iowa Jima and Okinawa, and he’d been on the aircraft carrier USS Bunker Hill when it was attacked and set on fire by Kamikaze suicide bombers.

After surviving that, no college football game could’ve been overly stressful for Barnes, who would go on to a splendid career in education. He would become a school principal at a lot of places. He was the first at Central Cabarrus High when it opened in 1966.

Coach Kirkland, an Elon graduate who coached Salisbury’s Boyden High before being hired at Catawba prior to the 1934 season, also barely survived 1945. He suffered a heart attack following Catawba’s loss to William & Mary the third week of the season. Legend has it that he directed the rest of that season from a bed in his home, not far from the field,  communicating instructions to the team during home games via messengers who raced back and forth. Among others, Catawba’s 1945 team beat Richmond of the Southern Conference and went 10-1. Kirkland considered that Richmond game his greatest victory — at least until the Indians won back-to-back Tangerine Bowls.

Elon shut out Catawba late in the 1939 season. Catawba wouldn’t be blanked again until after Kirkland retired following the 1948 season. The Indians would break the national record for scoring in consecutive games. Wofford finally stopped the streak at 89 games in 1949.

Bolstered by returning veterans, the Indians capped a 10-2 season in 1946 ( the losses were to VMI and Presbyterian) by smashing Maryville College’s previously undefeated Fighting Scots, 31-0, in the inaugural Tangerine Bowl on New Year’s Day, 1947. That win made Kirkland’s forces (he was assisted by Earl Ruth and Chub Richards) the undisputed kings of small college southern football.

The Indians earned a return trip to the Tangerine Bowl. This time the opponent would be Marshall from Huntington, West Virginia. It was still Marshall College then. The Thundering Herd had lost to Canisius and Xavier and was 9-2.

Marshall’s head football coach was Cam Henderson. He was known mostly for basketball (363 wins at Marshall), and the Cam Henderson Center is still the home of Marshall’s basketball team. He is credited by many as the inventor of the 2-3 zone defense.

Henderson was also a capable football coach, and he’d guided Marshall’s Big Green to a stunning victory over Wake Forest in 1941.

In March, 1947, Henderson put Marshall’s basketball program on the national map by winning the 32-team NAIB tournament in Kansas City. That’s the tournament that would later become known as the NAIA tournament.

Marshall’s basketball success led an invitation to play in the  Los Angeles Invitational Tournament in the early days of 1948. This was a huge chance for Marshall to prove itself against the big boys, and Henderson accepted the challenge. That was the tournament notable for coach John Wooden’s Indiana State team bringing the first African-American player to participate in  the event. Marshall won the tournament, beating Syracuse, 46-44, in the championship game.

The other missing defensive end was “Wildman” Willey, who also starred for Marshall’s hoops squad.

Would Henderson, Willey and Koontz have changed what happened in the Tangerine Bowl? We’ll never know.

We do know that the 1948 Tangerine Bowl was the most publicized and hyped event in Catawba football history.  The Associated Press covered the game. So did United Press International. West Virginia papers were in Orlando, along with scribes from Salisbury and Greensboro and Catawba publicist Herman Helms. WSTP and WBT radio broadcast the game to the folks back in North Carolina.

Assistant coach Roy Straight was in charge of Marshall.

The Catawba players enjoyed the street parade on Dec. 31, then headed to their hotel. Kirkland had imposed a 10:30 p.m. curfew for New Year’s Eve. It’s not known if the players complied.

Kirkland offered few quips to  the media and was too busy with practice and game plans to meet parade queens and dine with dignitaries.

The only pregame quote that’s available from  the business-like Kirkland was right to the point: “A trip this far is not made to be on the losing end.”

Catawba’s best player probably was New Jersey native Ray Yagiello, a co-captain who manned the tackle position, along with Barnes. He was a 24-year-old three-time All-American (1945, 1946, 1947). In 1949, Yagiello would be starting at right guard for the NFL’s Los Angeles Rams. That’s how good he was.

Catawba’s other co-captain was 26-year-old back Harold Bowen, another ex-Marine and veteran of the war in the Pacific, who had grown up in Salisbury. He was questionable for the bowl game with an injury. That had to be a concern for Kirkland.

The Indians had to wait around all day on Jan. 1 to finally play the game at Greater Orlando Stadium at 8:15 p.m. The crowd exceeded 9,000.

It was the physical game that everyone expected with both teams employing single-wing offenses. Catawba was held to six first downs for the entire game and managed only 54 net rushing yards. The Indians also completed only two passes for 38 yards. Still, their defense was so good they were able to find a way. And they were disciplined. Catawba didn’t have a single penalty.

It was still scoreless in the fourth quarter when a magnificent punt by the ailing Bowen rolled to the Marshall 1-yard line. That was the first act in Catawba’s winning sequence.

Marshall went three-and-out. The Herd got off a nice punt to midfield. Catawba returner Bill Speacht muffed the punt momentarily, but then he recovered and fought his way to the Marshall 45.  Catawba had a short field to work with.

Marion Lee Spears, a fullback from Lexington known as Leapin’ Lee, lugged the ball to the 40. Catawba’s Bobby Gore completed Catawba’s second pass of the day to the 30, and Gore and Speacht fooled Marshall with a fake reverse and reached the 22. Then Spears pounded to the 15 and moved the chains.

From there, it was all Spears and all crunching power behind legends such as end Art Claar and guards Lester “Lefty” Gardner and Red Lambeth.

Spears, who would carry seven straight times, took it to the 13, then the 8, and then the 6. On fourth-and-1 from the 6, he struggled for 3 yards.  Two plays later, Spears leapt into the end zone. Catawba got the only TD of the game with 4:30 remaining. Lamar Dorton, who played minor league baseball from 1948-1956, added the extra point.

Catawba’s defense needed one more stop — and got it. Marshall, led by All-American Marvin Wetzel  and Tangerine Bowl MVP Donnie Gibson, who had moved to end to replace Willey, reached the Catawba 30, but the Indians pushed the Big Green back to the 40 as the game ended.

“They were a good hard-knocking club and it hurts to lose, but we were up against a first-class team,” Straight said.

Kirkland’s 14-season record at Catawba would be 107-31-7. His last season at the helm of Catawba’s football team would be 1948, a year in which Spears would duel with Washington & Jefferson’s “Deacon” Dan Towler, a future NFL star, for the national scoring title. Kirkland would die in 1953 when he was 48.

The year of 1947 was a difficult one in Rowan County, with 45 violent deaths recorded. Citizens were killed by falling trees and exploding gas cans. They were fatally struck by trains, trucks, cars and tractors.

But the Catawba football team’s great victory in the Tangerine Bowl brought hope for better times in 1948.

No. 4 Alabama dominates No. 1 Clemson in Sugar…