Bitter cold grips much of North Carolina; snow on the way for some 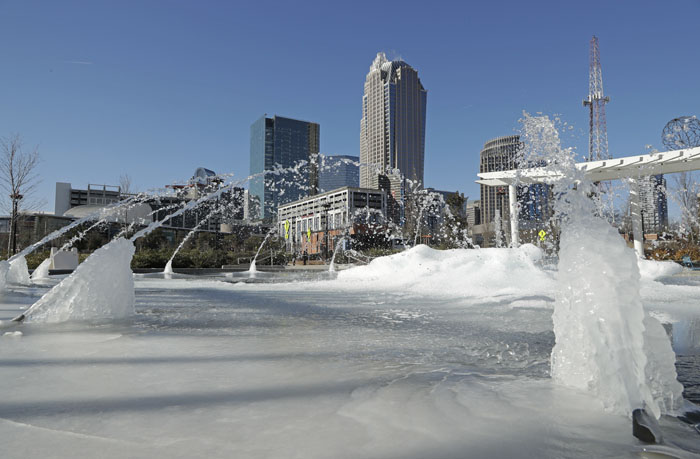 The Charlotte skyline can be seen in the background as water squirts from a frozen fountain in January.

RALEIGH — It is bitterly cold across North Carolina, and forecasters say snow could be coming to the eastern part of the state later this week.

The National Weather Service issued a wind chill advisory for 75 of the state’s 100 counties for Tuesday morning.

Wind chill readings as low as minus-15 were expected in the mountains. A reading of 2 was reported in New Bern, with 13 in Raleigh.

Many schools, including those in Rowan County, opened two hours later than usual Tuesday because of the cold. Rowan schools are back on a normal schedule today.

A winter storm watch was reported in 33 counties. Snow was possible today with up to 4 inches expected along the east coast.

Duke Energy said Tuesday that more than 8,500 customers in North Carolina and South Carolina were without power. The most serious problems were reported in Henderson, Lee and Randolph counties, west and southwest of Raleigh.

Of the total reported Tuesday afternoon, 8,363 outages were in North Carolina, and 6,039 were in Henderson County. The utility says 1,174 outages are reported in Randolph County.

By comparison, Greenville County in South Carolina had 92 customer outages.

State officials are making preparations ahead of the winter storm.

The National Weather Service upgraded a winter storm watch on Tuesday to a winter weather advisory, effective from noon today until Thursday morning.

Forecasters said the storm could leave up to 3 inches of snow in the easternmost counties.

Gov. Roy Cooper said a small change in a storm’s track can make a big difference in how much snow falls and where. Cooper is encouraging families and businesses to get ready.

Motorists in areas hit by the winter storm are being told to expect treacherous driving conditions tonight and into Thursday morning. A statement from the weather service office in Raleigh said the heaviest snow will fall between 9 p.m. and midnight today.

The forecast says up to 3 inches of snow is possible along and east of a line from Scotland Neck to Rocky Mount to Goldsboro. However, forecasters also painted a worst-case scenario that has precipitation falling as far west as Greensboro and Albemarle.

Once the snow stops, forecasters are warning of ice on streets and highways.