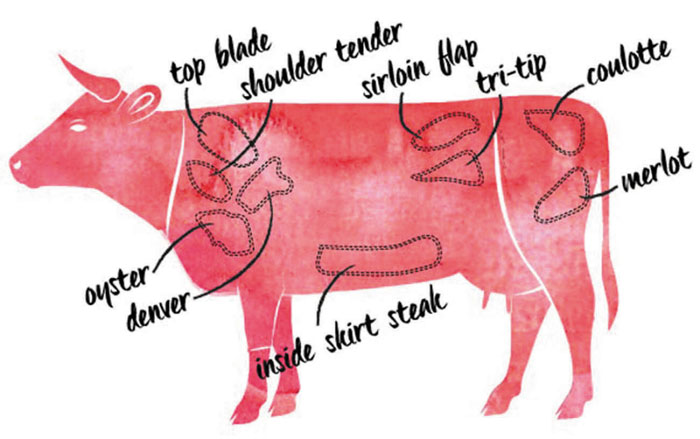 New cuts of beef will show up at restaurants, like the merlot steak, said to be more tender, but similar to a flank steak.

Heat is one thing, and spices, ethnic flavors and more local foods.

I predict more slow cooker and instant pot meals locally, as our time continues to be eaten up by things other than food preparation. I see a continued interest in heritage pork products and free-range chicken, while most people still prefer grain-fed beef over strictly grass fed.

The national sweet tooth will not be satisfied by anything other than more sweets. Doughnuts will remain popular, and their toppings and fillings will expand, literally, and take on new flavors and textures.

The National Restaurant Association makes predictions for 2018 that include some unexpected new ideas.

The group reports that again in 2018, new cuts of meat, like a Merlot cut or a Vegas strip steak will start showing up in restaurants. Consumers are willing to try new cuts, especially if it’s less expensive. The Merlot cut is like flank steak, but more tender and quite flavorful.

House-made condiments come in second, building on the trend. It’s special ketchup, dips, sandwich spreads, on plates of meats, that sort of thing.

Street food’s influence will continue, partially due to the interest in global flavors.

And it follows that ethnic-inspired breakfasts could be hot, with chorizo scrambled eggs, pancakes made with coconut milk and a wider variety of breakfast burritos.

America loves its seafood, maybe a little too much. Shrimping grounds remain shut down in Maine, with limits on all kinds of seafoods throughout the world. Sustainable seafoods will continue to be important, but it’s also the kind of thing consumers can’t easily decipher. New rules are helping.

Kids’ meals are getting healthier, which has been happening for several years. Fast food restaurants have tried to offer better options, and parents who pack are making better choices for the lunchbox.

Carbohydrate alternatives continue to grow, as spiralizers and other tools make it easy to churn out zoodles — zucchini noodles — and carrot noodles and beet noodles and cucumber strings. Spaghetti squash is staging a coup, too, with more and more recipes for things like spaghetti squash lasagna.

Uncommon herbs show up on the list for 2018, too. But, it all depends on your definition of “uncommon.” For some people, it might be a simple as parsley or rosemary, for others, it might be fennel or lemon verbena.

We’ve been experimenting with ethnic cuisine ever since we settled in North America. But go beyond Chinese or Mexican, because now, restaurants are offering Ethiopian, Peruvian, Swedish, Middle Eastern.

Then we will be using more exotic spices in 2018, prompted by our interest in global cuisine. Think harissa, a Tunisian paste combining hot chili peppers and spices like cumin, coriander and caraway, or gochujang, a fermented paste using red chilies and is the highlight of many Korean recipes.

To go along with house-made condiments, house-made and artisan pickles will be popular in 2018, the association reports. They’ll show up on sandwiches, as sides and appetizers. Of course, here in the South, we’ll batter and fry them.

And, just like I said, heritage breed meats are here to stay. The popular Berkshire pig really does produce superior pork. Look for other heritage breeds in beef and chicken, too.

While kids are eating healthier lunches, some of that lunch will be inspired by ethnic dishes. Just go slow. Some children, well, many, do not like to try new flavors. But a sandwich on a tortilla is not so strange, is it?

I’ll bet they’ll go for some of the new flavors in doughnuts, like pralines, maybe even green tea. Steer them away from the new boozy doughnuts, but feel free to indulge yourself.

Remember the time before sriracha? It hasn’t always been on the shelf. Look for new ethnic condiments popping up, like the gochujang paste.

Grains, especially ancient ones, are still coming into their own, like quinoa. As restaurants look for gluten free options, more and more of these seeds and grains will show up in unexpected places.

Some foodies over at delish.com have declared that the activated charcoal trend began in 2017 and they hope it’s dead. But the pickle trend is a positive, up to a point, including pickle cupcakes.

They’re into cheese-stuffed everything, but not over-the-topping pizza, like a place that puts tacos, guacamole and sour cream on top of their pizzas.

What will you have to drink? Delish says it should be kombucha or matcha green tea.

Or you can sip the latest local beer or head out to one of the distilleries that are popping up all over.

Don’t worry, though, comfort foods are not going away. Your mac and cheese may get spicier or include cauliflower, and the potatoes in your salad may be different colors, but neither one will go out of style.

New Year celebration at the Bell Tower rings in…