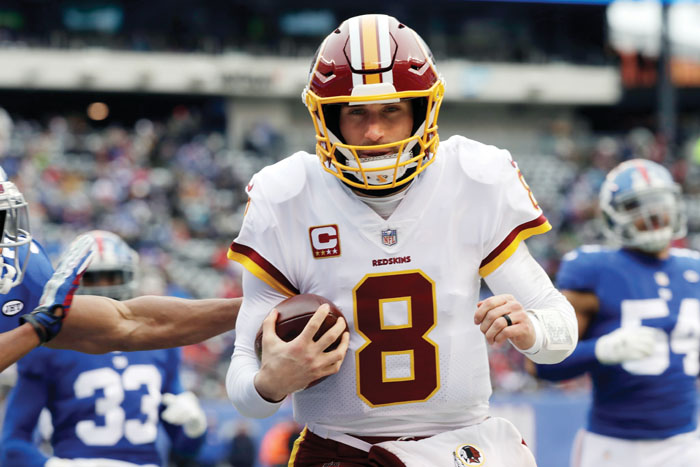 Washington Redskins quarterback Kirk Cousins (8) rushes for a touchdown during the first half of an NFL football game against the New York Giants, Sunday, Dec. 31, 2017, in East Rutherford, N.J. (AP Photo/Mark Lennihan)

ASHBURN, Va. (AP) — The Christmas-colored gift bags with Nikes and more filled the lockers of each offensive lineman.

It was Kirk Cousins’ way of saying thank you, a better parting gift than his three interceptions in what could be his final game with the Washington Redskins that exacerbated the debate about whether they should keep him or sign him long term.

Now the Redskins are in the same spot as they were a year ago, with coach Jay Gruden’s job safe but the same uncertainty about Cousins, who has played the past two seasons on the franchise tag and could be ticketed for another one-year deal or a departure that would create even more questions.

“It is the same old story, but now it’s more real than ever and everybody’s going to do whatever they can right now to try to dissect the situation,” linebacker Will Compton said Monday on locker cleanout day.

Washington went 9-7, 8-7-1 and 7-9 in Cousins’ three seasons as its starting quarterback with this past season getting derailed by several key injuries.

Asked Tuesday to evaluate Cousins’ 2017, Gruden said, “When you’re 7-9, it’s hard to say, ‘Wow, this guy really was outstanding,’” then added: “Kirk had his flashes where he was really good.”

As for moving forward, the coach said: “Whether he’s here or not, we have to figure out ways that we’re going to make this team better.”

Cousins became the first QB in franchise history to start 16 games in each of three consecutive seasons and threw for 4,000 yards in all of them, with 81 touchdowns and 36 interceptions, but enough bad games and decisions to fuel the doubters and leave the front office unwilling to commit to what could be a bigger deal than what the Oakland Raiders gave Derek Carr.

“He’s an amazing quarterback,” right tackle Morgan Moses said. “He’s an elite quarterback in my eyes. He has the smarts, he has the tools, he gets the ball out of his hands fast, he’s able to read defenses — all the things you ask a quarterback to do in the NFL.”

If Cousins does return, he will continue to work with quarterbacks coach Kevin O’Connell. Gruden announced Tuesday that O’Connell will be back, adding the title of passing game coordinator.

Cousins on Sunday said, “I’ll use all the time that I can” to make a decision about his future. The 29-year-old said he knows how to handle going year-to-year, while Gruden said getting stability at quarterback is central to the organization’s next few steps.

“If you got (a quarterback), you would like to keep one, but you want to make that decision pretty soon or Kirk will also, so it’s not totally up to us, you know?” Gruden said. “Kirk’s got to buy in, also.”

Teammates have spent days and weeks saying they want him back while fully conceding they have no idea what’s going to go down.

“Whatever happens, we’ve got to just roll with it and be ready for whatever,” receiver Jamison Crowder said.

“I think it would definitely be a bonus — a good thing — to have him back, especially with the chemistry that we all have within the offense. Hopefully he can come back.”

Here’s some things to watch with the Redskins:

INJURY FALLOUT: The Redskins finished the season with more than a dozen regulars on injured reserve.

Washington never got to see a chance how good it could be with a full season from Thompson, Kelley, Reed, Williams, Pryor, rookie defensive lineman Jonathan Allen, linebackers Compton and Mason Foster and others.

Swearinger intends to keep teammates on that, though president Bruce Allen, senior vice president of player personnel Doug Williams and Gruden could also make roster choices based on who could stay healthy.

Asked about keeping the roster healthier next season, Gruden said: “I don’t think there’s any doubt that’s something we have to take a close look at.”

SKILL POSITIONING: After seven running backs carried the ball in 2017, there’s no clarity on who will be the starter in 2018. The same goes at receiver in the post DeSean Jackson and Pierre Garcon era after Crowder and Ryan Grant were Cousins’ favorite targets.

Maybe the next step belongs to 2016 first-round pick Josh Doctson, who followed an injury-plagued rookie season by leading the Redskins with six touchdown catches.

“I feel like he showed us a little glimpse of his talent,” Crowder said. “He just kind of got his feet wet this year. I know next year he’ll come back, he’s going to be one of the top receivers in this league.”

NORMAN’S STAND: When cornerback Josh Norman signed a $75 million, five-year contract, he wanted to be part of the same success that he was with the Carolina Panthers. Instead, he lamented that Redskins players “got trash bags” instead of travel bags on New Year’s Day and vowed to help make things better.

“Just got to go back to the drawing board,” Norman said. “Obviously it’s very, very disappointing. … Looking forward to 2018 and preparing a better approach.”

YOUTH: Injuries, particularly on defense, gave the Redskins a good look at young players such as second-year defensive linemen Matt Ioannidis and Anthony Lanier, third-year receiver turned cornerback Quinton Dunbar and rookie defensive backs Fabian Moreau and Montae Nicholson. They should be the building blocks of a defense that needs to improve.

“I felt like we took some strides up front this year, especially with our defensive line play — Matt Ioannidis, Lanier, Jonathan Allen,” linebacker Ryan Kerrigan said. “All those guys played big roles for us. You look at Matt and Anthony, Jon, those guys are young and feel like can be really, really productive players in this league.”

HALL’S DECISION: Safety DeAngelo Hall is considering retirement at age 34 after 14 NFL seasons with the Atlanta Falcons, Oakland Raiders and Redskins. Hall might want to get into coaching, but isn’t closing the door on keeping his playing career going.

“At some point, you know,” Hall said. “I don’t know yet, but I’m feeling like I’m getting close to knowing.”