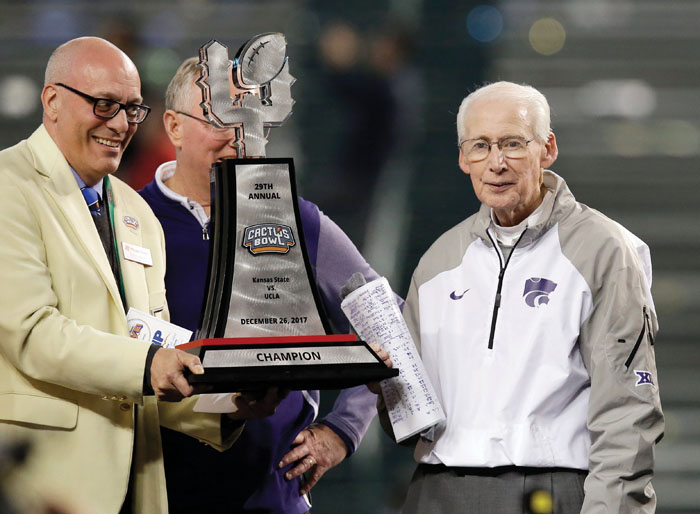 By DAVE SKRETTA, AP Sports Writer
KANSAS CITY, Mo. (AP) — Kansas State coach Bill Snyder will be back on the sideline next season.
The 78-year-old coach had been mulling his future since the Wildcats beat UCLA in the Cactus Bowl last week. Snyder ultimately announced in a brief statement Tuesday that he would return, ending growing speculation in some circles that he might retire for a second time.
“As I have stated many times, as long as I remain in good health, am wanted and have a positive impact on the young people in our program, I will continue to be the head coach at Kansas State,” he said. “Those factors have not changed, and I look forward to meeting with our players and beginning our out-of-season program when classes resume.”
Snyder informed his family of his intentions before telling his assistants in a brief meeting on Tuesday, a person familiar with the decision-making process told The Associated Press.
The person spoke on condition of anonymity because Snyder did not discuss his plans publicly.
Snyder was diagnosed with throat cancer last offseason, but hardly missed a practice and headed into the year with high expectations. A series of early losses scuttled Big 12 title hopes, and it took a run at the end of the year just to become eligible for a bowl game.
Snyder is 210-110-1 since taking over the program in 1988.
“We are excited that Coach Snyder has decided to continue to lead our program and look forward to building off the late-season momentum which included five wins in our final six games, a top-10 road win and Cactus Bowl victory,” said Kansas State athletic director Gene Taylor, who was hired earlier this year. “I know he and his staff, in addition to our student-athletes, are anxious to get winter workouts and spring practices under way in preparation for next season.”
The Wildcats will return most of their starters from a team that ultimately went 8-5 and won its second straight bowl game. Alex Delton and Skylar Thompson, the two quarterbacks who took most of the snaps, will be back along with a veteran offensive line and several skill players.
Their defense should be stout next season, too, even though standout cornerback and return man D.J. Reed has announced plans to skip his senior season for the NFL draft.
Snyder has a contract that rolls over each year, which means he can essentially choose when to walk away. And he has said the last several years that he makes that decision on a year-by-year basis, based primarily on his health but also the wishes of his family.
Now that his decision has been made, Snyder can go about replacing offensive coordinator Dana Dimel, who left for the top job at UTEP. Dimel had grown unpopular with many Kansas State fans eager for a fresh start, and there are several candidates on the staff that will get consideration, among them former Heisman Trophy candidate Collin Klein and wide receivers coach Andre Coleman.
Snyder can also begin putting the finishing touches on a recruiting class that was nearly filled during the fall, and begin preparing for a season that should again be full of expectations.
Along with its conference games, the Wildcats have a trio of home games highlighted by a visit from Mississippi State in early September that should provide a good early barometer.
“It’s pretty obvious we’d have to change course because we didn’t take advantage of the strong finish that we had last year,” Snyder said after the Cactus Bowl. “As you know we were not a real good football team earlier in the season. So whatever that approach was, we’re going to have to change it.
“The main thing is every year’s different. And the dynamics are different regardless of how many young guys you have back, et cetera. And it’s still about the same process. And you’ve heard that, so I won’t repeat all the things that we talk about, what our program’s about and what the process is about, but that is indeed — they understand it. It’s just a matter of doing it.”
___
More AP college football: https://collegefootball.ap.org and https://twitter.com/AP_Top25